Watch How Misinformed Aussie Politicians Are About Video Games 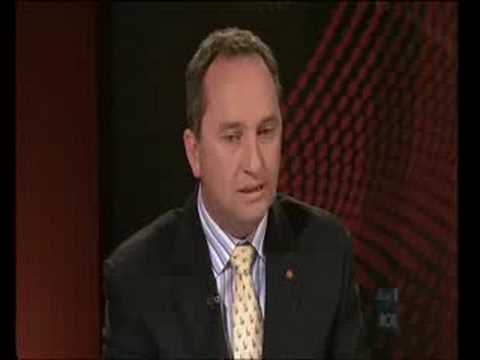 Thanks to Daniel Silk, who pointed me in the direction of the clip. Daniel also went to the trouble of putting together a letter to complain about the panel, which I’ve included after the jump.

If you’d like to read more information about games classification, I urge you to check these out:
Michael Atkinson, No R18+ For Games In Australia: Why It Hurts Children
R18 Classification & Video Games: What You Can Do
Why Michael Atkinson’s Opposal Of An R18+ Rating For Games Does Bugger All To Protect Kids, Promotes Crime

To whom it may concern,

I watched you show for the first time last night (24/7/08) as I was informed that the question of “Why Australia doesn’t have an R rating for video games”. I must say that I am thoroughly disappointed at how misinformed most of you panel was on the subject and how quickly the original question was side tracked from.

To start off, the host had a completely wrong idea about the game “Fallout 3” which was used to start the question. This game was only refuse classification (not banned mind you) because of the use of the drug morphine as a pain killer.
Why this ONE game was pick up for its use is beyond me, as there have been countless others that have been classified fine with use of the drug in the game (Half life 1 and 2, Fallout 1 and 2 just to name a couple of popular games).

Also the description your host used to describe Fallout 3 was a bit incorrect, yes there is violence in the game – but the “main purpose” is not to kill everything. The game takes place in a post apocalyptic world – as was stated – but the player is then given the choice of how to interact in this now war torn, almost primitive new world. The player CAN just kill everyone, but that will have ramification on how the rest of the game will play out. Or he could be diplomatic and talk to everyone – be friendly and help them out, and be rewarded for his actions.

This seems to be the idea that most of the older generations (I’m 25 myself and have been gaming since the age of 8) have stuck in their heads – that all these games are just full of violence for violence sake. Most ‘adult’ games have violent themes for the same reason that ‘mature/restricted’ movies have violent themes – to move the story and add suspense/tension.

Now to move on, as the first lady to answer the question decided to take it from a personal position of “I don’t want my kids to play it – so nobody can!”. This does nothing but hurt the Australian economy, but also stabs every parent by saying “You don’t know how to look after you kids, so we’ll let the government do it for you”. I agree totally that minors should not be allowed to play violent games, and that we should have a solid, PUBLISIZED rating system in place (which I’ll get to shortly) to stop minors from purchasing these games. But by refusing classification on games of a mature nature will not stop the minors from getting hold of them anymore than if there was an R rating. But if there was such a rating, at least the Australian economy can be injected with otherwise missing cash, and parents will be more informed about the games that their children are playing.

But like I said, they can still get hold of these games by other means, downloading from the internet (which is not only illegal, but hurts the economy) or importing them from other countries. Well to start, parents can monitor (and should try to monitor) their child’s internet usage as much as possible – and in this day in age is surprisingly easy with numerous programs that allow parent to control what sites can and can’t be accessed. And as far as importing the games goes (which apparently customs would seize all copies of ‘banned’ games) most of the new consoles have parent controls – which stops ANYONE from playing any game deemed so by the user (parent in this case) to a certain rating level.

Now about the rating system, which most of you panel were convinced doesn’t exist in this country. We currently have in place a rating system to a maximum of M15+ which most of these controversial games must get released into in this country if they wish to be sold. This causes confusion in parents as they think “Well little Bobby watches M rated movies he should be fine with this” without realising how broad of a rating that is. If we were to have an R rating it would decrease some confusion, and to properly inform the public about the rating system (like we currently do with television rating) would decrease it even more. I have been in game stores behind a parent who, after being informed about a game by the clerk, says “It’s only rated M so it can’t be that bad”.

How is it that Australia is the only country in the western world not to have an R rating? New Zealand has one and it isn’t over run by people stealing cars and running over pedestrians, and the UK seems to be dealing with one fine. Heck, even in Japan – where they have some really controversial games – they have a Z rating which is illegal to be displayed and must be asked from specifically before showing ID to be purchased. There are many ways to combat any of the misconceptions that are brought up when talking about an R rating, and all of them are valid and proven to work.

This still doesn’t lessen the disappointment I feel after watching your show, funnily called “Questions and Answers” to see the person who asked the question spend about 10 minutes with a raise hand to try (I can only guess) and correct your panel on the gross half truths they were saying. Also I must ask, why was the topic switch from talking about bringing in a new rating to compliment they current rating system, to how this would suddenly allow snuff films and excessive pokies to be brought into this country? I have never heard such useless propaganda spread in all my life! Snuff films and video games would still be illegal, even with an R rating, as they will always be deemed inappropriate and unnecessary; just like we can’t have them now. How the topic swung to this I don’t know, but to try and push this as fact is disappointing to hear from people in government. And the guy in the audience with his question about how this would allow more pokies to open? I think he must have confused gaming and Gaming. I can understand how that could happen, as they are both used to describe a similar experience, but they are not related in any way. One is to do with gambling, which as your panel successfully said is bad and does affect others, the other describes a pastime that many people are actively participative in. Neither affects the other.
Another point I would like to bring to light is the passing of information about studies linking violent video games and violent acts. These studies are inconclusive at best and there are also studies that state the opposite, that the playing of violent games actually DECREASES violent outbursts in some people. Trying to state these studies as actual facts when the verdict is still out is just plain wrong and I’m shocked that no-one on the panel tried to debate this. Yes, there are some people who are drawn to violent media – be it games, books or movies; but you don’t see us banning the latter two do you? To say that video games glorify violence is to say that Saving Private Ryan glorified the violence of World War II, or that America Beauty glorifies having sex with minors. If you are going to ban one, ban them all; don’t just ban things based on how you are feeling at the time.

So in conclusion, I am disappointed that your show seemed more like a platform to spout inconclusive propaganda and misinformation; and when your original question asker had a point he was obviously wanted to raise, was turned down and not allowed to speak out. Australia needs an R rating for its video games to bring it in line with the rest of the world, and to allow a more uniformed rating on games that should never be allowed in minor’s hands. The rating systems in Australia need to be publicized more as the public at large seems to be grossly misinformed and needs to be set straight. And seeing that there is only ONE MAN that is holding this country back in the ‘stone age of ratings’ shows that they way that these things are brought into this country need to be looked at as soon as possible.

While I’m not really fussed that I probably won’t get a reply to this letter, I do hope that you will bring these facts to light on your next show – as I feel bad for anyone who was watching to get the wrong idea about this new media type that has now shadowed the Movie and Television industries.