Obama vs. McCain in Soulcalibur IV 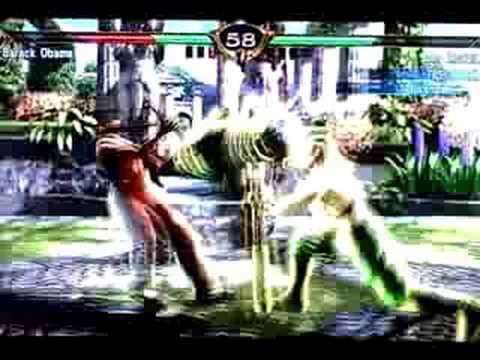 PC World’s Darren Gladstone got an itching to make some custom characters in SCIV, and created U.S. presidential candidates John McCain (Vietnam vet headband, big arse mallet) and Barack Obama (shirtless and swingin’ nunchaku.) And of course, the video ends with their series tied at 2-2, just so no one thinks this is an endorsement of or in-kind advertisement for either — because FEC paperwork is a bitch.

I’m trying to make allegories between their fighting traits and campaign positions but to be honest, haven’t followed things that closely. I do think the choice of weapons is rather adroit. Do you want your president to be some dancing elitist who prefers foreign fightin’ styles with sticks, or a guy with good-ole cornfed brute strength enough to pound his enemies with a massive phallic object?

As one commenter on GamePolitics aptly pointed out: Thank God Hillary did not get the nomination. I’ll let you think on it for a second.