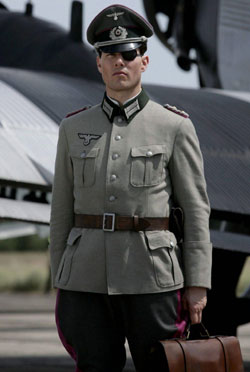 World War II, it’s a rarely used game genre, with one shoot-the-Nazi title popping up only once every… oh… month? So if the idea of waiting a few days until you can take aim at the nasty man with the mini moustache doesn’t appeal, or you’ve just got sore thumbs and would like to watch someone else give it a whack- pun intended-, check out Tom Cruise’s latest blockbuster Valkyrie.

Written and directed by the guys behind cult classic Usual Suspects, the WWII drama recounts the July 20, 1944 plot by high-ranking German officers to assassinate Adolf Hitler. Described by Nick over at Giz as something between Saving Private Ryan and Pearl Harbour, the film features an all-star cast, including Cruise, Kenneth Branagh and Bill Nighy.

Yeah, ok, so the ending is a foregone conclusion, but it is an interesting look into one of the (relatively) more successful attempts on the Nazi leader’s life.

Hit the jump for the film trailer.