The Meanest Thing Capcom Ever Did 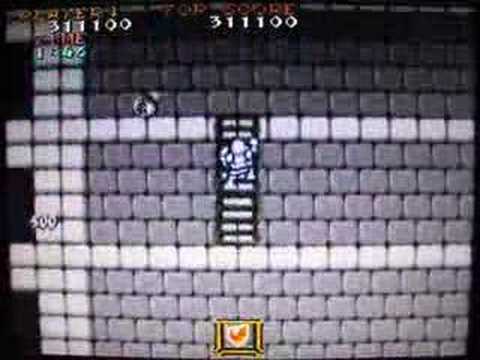 Maybe this is a commonly known fact, but I had no idea that Ghosts N’ Goblin, already a viciously hard game, had a malicious secret at the very end of the game.

Capcom’s Seth Killian drops the bad news on those of us who never managed to beat, or at least think they beat, the game.

Watching this video requires you to know about one of Capcom’s meanest tricks: after you play through and beat the ridiculously hard game, it turns out that “This room is an illusion and is a trap devised by Satan.” Oh noes!

So that was all a dream, and to get the REAL ending, you have to play through the entire game again. From the start.

That’s right. Not only do you have to deal with the fact that every level has a countdown clock which kills you instantly when it hits zero, and that you only can take two hits before dying and being sent back to the start of a level, you have to play through a second time, a much harder second time, to see the ending.

Fortunately for televisions, PSPs, controllers and small dogs, S-Kill posted this playthrough video so we don’t have to tempt our tempers as we try to play through the game twice.

Because I feel like it: Ghosts N’ Goblins Superplay