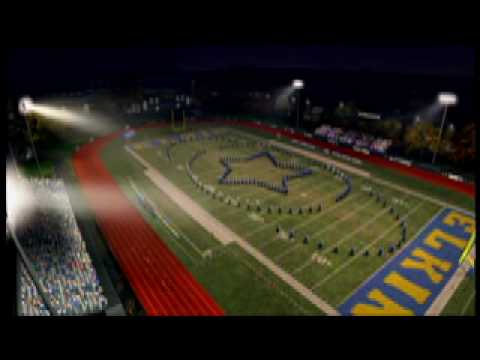 At my high school – among the smallest in North Carolina – we aren’t known as the “Rams” or the “Cardinals.” We’re “The Buckin’ Elks.” And Brad Nessler says that name – all of it – in NCAA Football 10.

I know of no other institution of learning, NCAA FBS, FCS, Division II, III or high school, that goes by “the Buckin’ Elks” for its athletic nickname. So when I used NCAA 10’s Teambuilder to create my high school on a lark today my jaw hit the floor when play-by-play man Brad Nessler introduced us by that very name. Watch the video. I’m not making it up.

Elkin is a five-time state champion – four this decade – but we are definitely not among the nation’s top-of-mind high school programs. Our 2002 title, the first since the fabled 1967 champions, came with 18 players on the roster.

I have a few theories as to why we made it in. EA Sports Tiburon probably realised, with the new Teambuilder interface, that some of their installation base would create their own high schools and be thrilled to hear their nicknames. Of the zillions of high schools in the United States, a bunch are already covered by existing mascots. So why not go pick out the more unique ones, especially recent champions, and give someone a thrill?

I made an offhand, highly anecdotal test of unique school names. Nessler doesn’t say the name of Mount Airy’s “Granite Bears” (2008 NCHSAA 1-A champs, ’09 runners-up). Nor does he announce the Washington (N.C.) High “Pam Pack.” Both come through as “the home team,” which is what the CPU offers up when it can’t recognise a nickname.

However, “Nimrods,” the hilarious nickname of Watersmeet, Mich. High, is also said by Nessler. But that school was featured in an ESPN advertisement, and also the subject of a USA Today profile five years ago, far more notoriety than we Elks have ever seen. So who knows what’s going on here.

Somewhere, for some reason, someone asked Brad Nessler to announce my high school for battle in a college football video game, but not because every single school in the United States, or even my state, was included in his script. Like Michael Moore finding the Russian missile pointed at Flint, Mich., I will not stop until I track down who was behind this. And why.