igf10iphoneoriginalpc stuffthe road to the igf 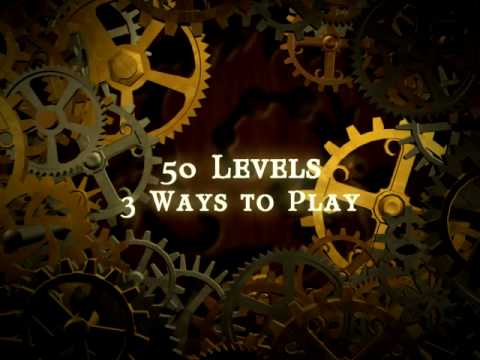 Tired of stodgy corporate games made by The Man and his minions? We’re playing the 31 best indie games for a change of pace – and so we can judge them. Today, Cogs.

Pipe-sliding, cog-turning pulls set around the surface of a wooden block, all rendered and animated with a chunky, realistic, tactile feel.

Cogs is done and can be bought for PC and iPhone. Or demoed for free. Info here.

Turn wheels and connect gears, and in this game, doing so makes a balloon inflate or a jack-in-the-box pop. The puzzles may not feel exceptionally ingenious. Well-crafted, but not revolutionary. No, the pleasure I had trying this game was with the feel, the sensation that I’m manipulating an actual floating block of metal, wood and brass.

While so many puzzle games are abstract, this one feels, even as it defies physics, as if it could be real. It’s nominated in this year’s Independent Games Festival, for excellence in design.

Kotaku: What was the inspiration behind your game?

Rob Jagnow: I love old machines. With computers, all the magic happens on a tiny chip, invisible to the naked eye. But with a steam-powered machine, if you look closely enough, you can figure out how everything works together to achieve some grand action. I wanted to take that idea and turn it into a game – something that gives you the same “ah-ha!” feeling that you get when you take apart an old toy and figure out what makes it tick.

Kotaku: Why video games? There are plenty of ways for a person to express themselves creatively, why did you choose this way?

That’s a good question. And in fact, I very nearly ended up in movies instead. I spent two summers interning at Pixar and really though that was where I’d end up. But life took me in a slightly different direction and when I ended up hunting for jobs in Boston, I found an opening at a small game startup called Demiurge Studios. I loved the work, so when my boyfriend was hired by Google, I used the move to San Francisco as an opportunity to start a studio of my own.

There’s something about video games that I feel is more intimate than other art forms. Players don’t just watch – they interact. And we’ve designed Cogs to be as immersive as possible. We didn’t want anything to break the illusion of working with a massive steampunk machine. Every aspect of the user interface is analogue, from the odometer-style counters to the revolving puzzle descriptions to the massive iris in the background that opens to reveal each new puzzle.

I’m trying to be a full-time video game developer, and so far, it’s going fairly well (Thanks in no small part to the recognition we’ve received from being an IGF nominee). I do contract work on the side to help make ends meet, but things have been going well enough that after my current contract ends, I may be able to spend full-time developing new game ideas for Lazy 8 Studios.

Make sure to check out the rest of the Independent Games Festival finalists as we head toward the March awards show.