The Lag And Fun Of Halo Reach’s Invasion 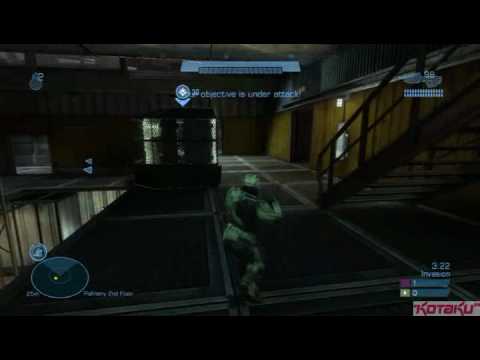 I spent about an hour messing around with Invasion’s new gamemodes and while they’re quickly becoming my favourites the experience as a whole was marred by some absurdly bad lag issues. (The video above shows some of the early lag I ran into during a match.)

Invasion shows up as a new Matchmaking option in the beta. Once you select it you are thrown into matches that take place on a new map called Boneyard.

Standard Invasion has you either defending a series of objects as Spartans or attacking them as Elites. In the initial phase of the game the object are a set of generators. Elites can start off with Warrior or Assassin loadouts, while Spartans can be Scouts or Marksmen.

If the Elites take down a generator, the map expands a bit and the next objective becomes security areas that have to be held for about half a minute. In this phase Elites can be Dark Assassins or Zealots, while Spartans can be Guards or Recon Marksmen.

This phase also adds three vehicles to the map: a warthog, ghost and wraith.

The final phase has Elites trying to grab the Core and bring it back to their base.

In this phase Elites can be Rangers, Royal Zealots, Gladiators or Champion Assassins, while Spartans can choose to be Airborne, Expert Markesmen, Operators or Grenadiers.

The vehicles at this point include A Warthog, Scorpion, Ghost, Banshee and Wraith.

You can also play Invasion Slayer which has you rolling through three phases trying to hold randomly spawned locations.

Here are the loadouts for each class of Elite and Spartan:

This mode seems to be the most interesting of the ones so far available, forcing players to try and play more cooperatively to win. Hopefully the lag issues will be sorted out by the weekend.

What do you think of Invasion?