Pac-Man Is Speechless At His Hall Of Fame Ceremony 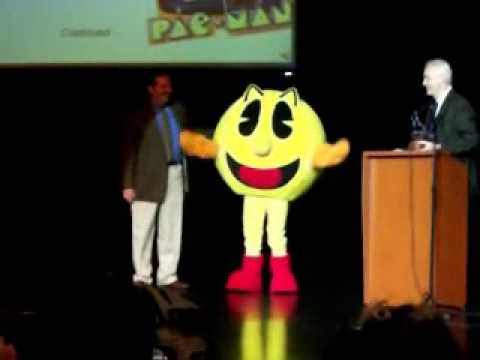 The first class of inductees of the International Video Game Hall of Fame at Ottumwa, Iowa, included 28 real people – and one video game character. Here is Pac-Man’s enshrinement during Saturday’s ceremony, with a Namco representative accepting the award.

Good thing Pac got a plaque and not something like a sportscoat; I’d hate to think of him doing like NFL Hall of Famer Michael Irvin, wearing it for two days straight, including while gettin’ it on with Ms Pac-Man.

Speaking of the Ms, Iowa Lt Gov Patty Judge attended the ceremonies and noted: “As the state’s highest-ranking woman in elected office, I must say I’m hopeful Ms Pac-Man will get her due here in Ottumwa one day as well, and I look forward to that celebration.”

The full list of honourees can be seen here.