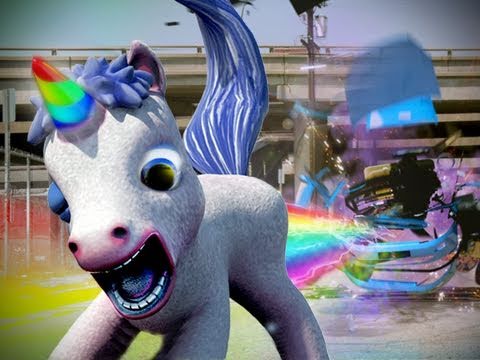 YouTube video sensation Freddie Wong and friends introduced us to Mr. Toots, a candy-colored unicorn with a magical gift: the ability to emit a high-powered rainbow beam from its anus capable of destroying anything in its path. But what does this have to do with video games?

Turns out Mr. Toots here is the property of Volition Inc., the developer behind Red Faction and Saints Row. And in the accompanying making of video for Mr. Toots, filmmakers Freddie Wong and Brandon Laatsch note that the “unicorn weapon” model is being used in “one of Volition’s upcoming games.”

So, don’t be surprised if a rainbow coloured unicorn shows up amongst the many unique weapons of mass destruction featured in Red Faction Armageddon. It could be this Red Faction game’s Ostrich Hammer.