Turn Your Body Into A First-Person-Shooter Controller 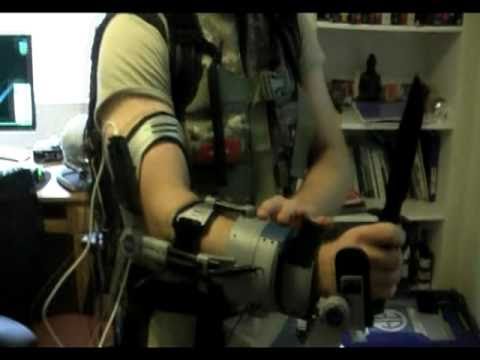 Novint, the folks behind that most curious Falcon peripheral, are back again with yet more hardware curios. This time, it’s the ability to turn your arm into a motion-controlled rumble pack.

It’s latest device is called Xio, and Novint says it adds the sense of “touch” to gaming. “Unlike current motion control technologies out there, you will be able to feel what is in the game,” explains Novint. “When you shoot a gun, take a full body golf swing, jump a car, or smash a sword into a shield, you’ll be able to feel what happens.”

The Xio is currently aimed (geddit?) at PCs, is apparently lag-free and should cost about the same as a Falcon.

In the above video, Novint shows off the Xio, along with a custom-built VR outfit that even uses a FPS gaming vest, the TNGames Third Space Vest, along with some prototype guns and a knife. If it was anyone else, I’d be very jaded and say this was vaporware, but this is Novint, those guys have dont nutty things in the past. This is madness. And I like it.