TAMPA, Fla. – To passersby, T.J., a fit 20-something, is running around a red felt carpet about half the size of a basketball court inside a convention centre. In his mind, he’s wearing a full set of body armour, his face obscured by a ski mask with a death’s head silkscreened on it. And he’s just dropped a terrorist inside Osama bin Laden’s Abbotabad compound.

“Pushing out!” he yells, eyes obscured to the outside world by virtual reality goggles. His partner in the simulation, David, nods to acknowledge. It’s time to move past the courtyard to hunt the leader of al-Qaida.

It hasn’t even been three weeks since a team of Navy SEALs killed bin Laden. But defence giant Raytheon and Motion Reality, the motion-capture studio that helped create many of your favourite movies and videogames, has already modeled a simulation on the iconic raid. Naturally, they’re debuting it at the 2011 Special Operations Forces Industry Conference, a gala of elite warriors and the military contractors catering to them. 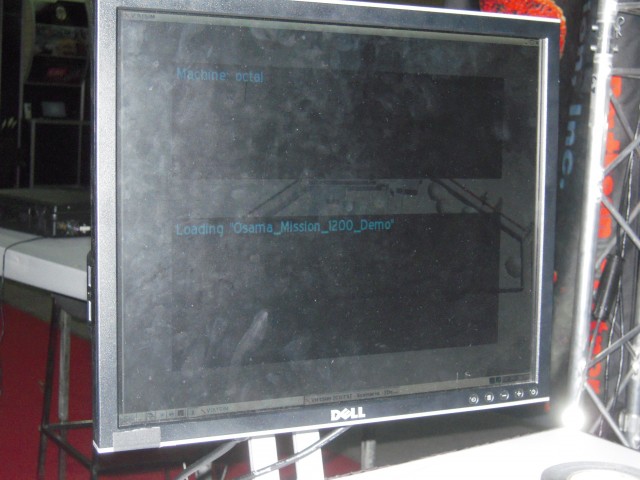 It’s safe to say the mood here is upbeat. Special operations forces just completed one of the most daring missions in history, ending the life of the world’s most infamous terrorist and bringing thousands out in the streets of New York and D.C. to celebrate. On my way into the conference, I almost literally bump into Army Maj. Gen. Joseph Votel, who was recently nominated to lead the team that killed bin Laden, the Joint Special Operations Command. He’s not a man who spends much time out at public events, and is in high spirits – even as he punts on an interview request.

Thomas McLaughlin, the CEO of Motion Reality, wants to make sure Votel has his fill of well-trained recruits. That’s why he built Virtsim, the virtual reality module that have T.J. and David acting all SEAL Team Six. The graphics look like Call of Duty: Pakistan, down to the bullet holes pockmarking the compound’s dusty, concrete walls. This might be the most exciting setting for Virtsim, but it’s by no means the only one. There’s Urban East, a “more Middle East”-like display, explains product manager Joel Rigunary, as well as Urban West, for hometown house-to-house fighting. Additionally, there’s Desert and Mountain. Sound like any wars you know?

“In the five minutes it takes to get ready,” McLaughlin beams, “they step into Afghanistan.” For the past year and a half, he says, the FBI has used Virtsim for training. Now he wants it to be the special operations community’s turn.

The commandos already use sims, of course. Before SEAL Team 6 hit Abbottabad, they reportedly prepped for the mission using a full-scale model of bin Laden’s pad, assembled by the The National Geospatial-Intelligence Agency.

McLaughlin might bring a slightly different flair to the training, however. A former academic and sci-fi enthusiast, McLaughlin started Motion Reality in the 1980s, strapping sensors on people to realistically digitize their movements. Sub-Zero’s sliding kick from Mortal Kombat? That was the result of McLaughlin licensing his software to Acclaim. More recently, his sensors enabled all three Lord of the Rings films, plus Polar Express, King Kong and Avatar.

Now his sensor tech is applied to a more intense objective. The virtual reality goggles strap to a black backpack packed with sensors. T.J. and David are wearing them on pads strapped to their extremities – they look like extremely bad-ass phylacteries – telling their avatars where to go and what to do in the module.

“I see two civilians, unarmed!” T.J. notes. Their avatars move past a pixelated woman with her arms above her head.

Suddenly David’s sensors on his chest buzz. He’s been tagged. A computerized voice thunders: “Warfighter Down!” McLaughlin explains that he wanted to make sure the trainee felt something when he gets shot. “There should be a penalty for failure,” he says.

Not that it’s such a bother. David gets up. He and T.J. get back into position at the outside of the compound, ready, once again, to hunt Osama bin Laden.