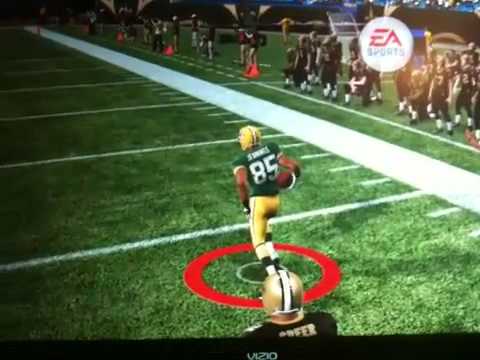 More than a year after this Madden fan’s near-religious experience [NSFW language] , Green Bay’s Greg Jennnnnnnnnings scoring a 99-yard touchdown on a broke leg is an internet meme backed by five million YouTube views and gracious acknowledgment from the NFL player himself. And now it’s memorialised as an achievement in Madden NFL 12

“Put Da Team on My Back” is EA Sports’ 50-gamerscore salute to Demetry James, the (ahem) foul-mouthed narrator of that YouTube Classic. To claim the trophy in Madden 12, you have to catch a 99-yard touchdown pass with Jennings. Broken leg is not necessary.

How does the creator feel about that? Let’s go inside the mind of a Demetry James (blblrrrbrrdrblrrt …)

“I can’t believe it, that’s some funny stuff,” James said in an email to Kotaku. “That’s amazing.”

EA Sports no doubt felt motivated to give a hat-tip as the video’s signature line is James, as Jennings, staggering on a broken leg and fending off the Saints’ Darren Sharper, vowing “I do this shit, for Madden!“

James later cut another million-hit video, of Seattle’s Marshawn Lynch destroying about seven Saints on the way to a 67-yard touchdown in the 2011 playoffs. However, “Hold My Diiiiiiick” is not an achievement in this game.