This Game Knocked My Socks Off At The Tokyo Game Show 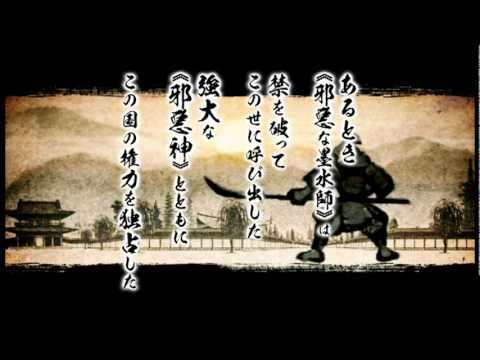 Sumioni, aka “Ink Demon”, is a stunner. Looks can be deceiving, and looks aren’t everything. Thankfully, Sumioni‘s beauty is more than skin deep.

At its heart, Sumioni is an old school 2D platformer. The catch is that you can draw the platforms. Players have different brushes at their disposable, such as a “Road Brush” to draw platforms, a “Fire Brush” to draw fire, and a “Water Brush”, which they can combine with fire to make steam.

To switch brushes, players press the PS Vita’s left trigger button. The screen goes to black and white, and the action freezes. Players can then select a new brush. Pressing the left trigger unfreezes the screen and puts them back in the action.

The water brush icon is in the lower left corner and can be easily selected by touching it, allowing players to shoot steam at enemies.

Acquire is still developing the title, and it might use the rear touch panel to access the brushes. With the brushes, players can write whatever they like, from platforms to little circles. You can write in English, too, if you like! There’s a lot of freedom.

Japanese games get crap from Western gamers for having crap controls. Sumioni features intuitive controls. They’re so normal, which is a blessing because sometimes Japanese controls are anything but. Move the thumbstick right or left to go either direction. Press up, and the character jumps — a rather standard control Acquire said it took from fighting games. Press square, and the character attacks. It all makes sense!

There were a handful of different enemies, including archers — who were pesky bastards that I totally hated!

The game does use classic 2D elements like platforming as well as classic role-playing elements like summoning. The progression through the two stages I played were close to bullet hell shooters, which have a mini boss and then a huge end-of-stage boss. According to Acquire, the level design of maniac shooters provided the stage design blueprint for the game.

Sumioni is wrapped in a beautiful, appealing package. The Okami comparisons are superficial. This is a different game altogether. What resonated while I was playing and when I was thinking back on it later, was that the game seemed both retro and totally new. It reminded me of being playing something 20 years ago, yet at the same time, it felt like it was from the future. I haven’t had that sensation very often while gaming. Sumioni might still be in development, but it could shape up to be a very special game.

Sumioni is slated for a 2012 release in Japan. According to Acquire there is a “high probability” that the game will be localised for a Western release. Be sure to check out the game’s video walkthrough.