Sometimes You Conquer The Road, Sometimes The Road Conquers You 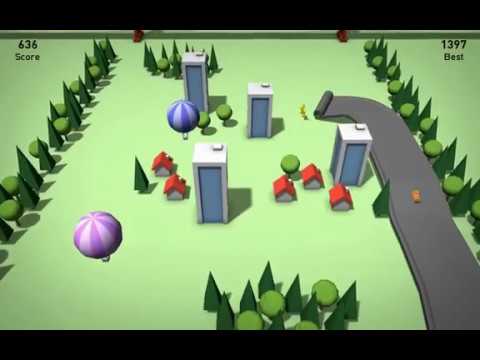 How do you create a competitive driving game with only one car? Bernhard Handler’s Roadeo offers a simple and elegant solution. Player one drives the car, and player two steers the road.

Oh for those heady days of youth, when playing a multiplayer game on a PC meant you either had two joysticks hooked up or were using two halves of the same keyboard; none of this internet business. Roadeo, available now for play at Kongregate, reminds me of those days, back before magical wires connected everyone and everything while simultaneously driving them further apart.

On one set of keyboard keys Roadeo is a driving game, with the player navigating a long and winding road, collecting power-ups and attempting not to run off the side of the highway. On the other set is that highway, navigating obstacles like trees, houses, and bridges in order to bypass the city planning organisations that would see it shut down.

It’s a little bit driving, and a little bit puzzle. In competitive mode the driver has to stay on the track, while the track has to weave itself over, under, and to the side of obstacles, all the while trying to shake the car from its back. The first player to either fall off the road or crash into an obstacle loses.

There’s also a cooperative mode, in which the two players work together to collect items and score points, because friendship is pretty awesome. Especially friendship that allows for two players to sit side-by-side at a computer keyboard.

Perhaps one day Roadeo will make it to the iPad or an Android tablet, where it can be truly appreciated. Until then, scoot over.