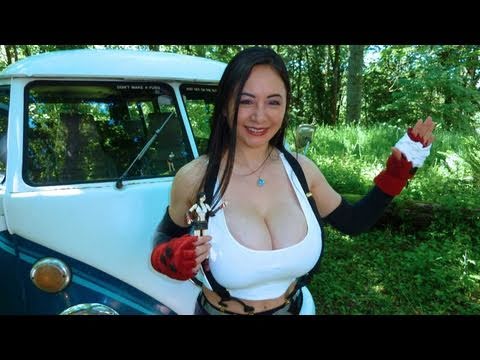 Kotaku has posted tons of cosplay over the years. Yet, I cannot remember any pieces the site did on cosplayers who cook, let alone camp. Tifa — that’s her name — does both.

And with a name like Tifa, you betcha she’s dressed as the Final Fantasy VII character Tifa Lockhart.

So what the hell is going on here? “I have always loved to cook,” Tifa explained on her site, Tifa.TV. “One day I was on YouTube checking out some different recipe videos and I became terribly bored at what I was seeing.”

In the first video, Tifa shows off her beautiful bus as well as her cooking skills. While there’s no nudity, the clip might be NSFW.

The clips are from 2010 (so old!), but until tipster Emmy sent them to Kotaku, I’d never seen them — let alone cooking cosplayer. So if you’re sensitive (or a minor), you might want to skip these clips. But remember, the point here is cooking!

“I’m happy to say how many guys were just surfing for boobs and later reported to me how I got them interested in cooking as a result of finding me,” Tifa added. “While I do have mostly guys checking out my videos, I have found through YouTube’s insight reports that over 10 per cent of my viewers are female and many of them have had some really encouraging comments to make to my videos.”