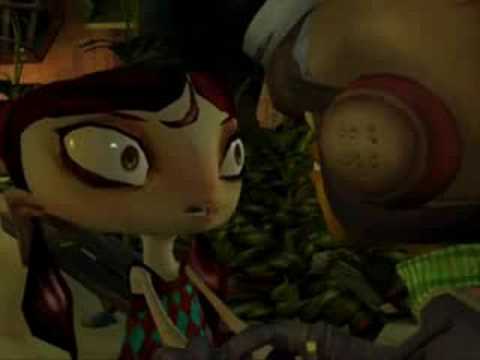 You want to know how Tim Schafer and Double Fine managed to generate more than a million dollars in Kickstarter cash? Look no further than this hilarious exchange from twisted platforming classic Psychonauts. Sometimes you just gotta make out.

Expect to see plenty of Schafer and friends in our weekly Great Moments in Gaming humour segment. He and colleagues Dave Grossman and Ron Gilbert are responsible for a some of the most hilarious gaming experiences ever gifted to mortal man from on high, from the point-and-click adventure The Secret of Monkey Island to the point-and-click adventure Day of the Tentacle.

Apparently pointing and clicking leaves a lot of room for funny bits.

But 2006’s Psychonauts is no point-and-click adventure. It’s a platform odyssey through the fractured minds of the campers and counselors of a summer camp for psychic children. Children like Razputin, the game’s hero, voiced by Richard Steven Horvitz of Invader Zim fame. Or Raz’s girlfriend Lili, who get excited by the strangest things.

The entire game is filled with side-splitting humour, courtesy of both Schafer and Eric Wolpaw, half of the beloved gaming commentary site Old Man Murray, who later went on to write the dialog for Portal and Portal 2.

But those are games for another week. Now pucker up!