An Exercise Bike Is The Controller For This Mario Kart Mod 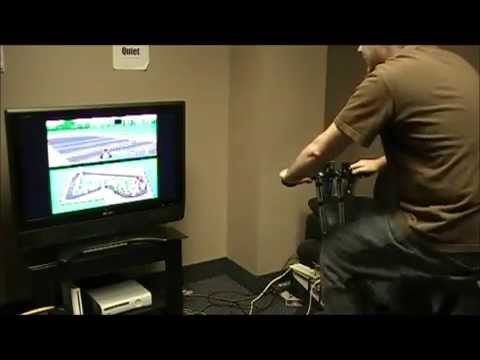 Now, this is exergaming with a purpose. Modder Brent Smith of Canada rigged an old exercise bike with some sensors, switches, transistors and the indispensable Arduino microcontroller, turning the whole thing into a Super Nintendo controller for use in Mario Kart.

Pedalling at a certain rate equals holding down the A button for acceleration and steering is done via buttons on either side of the handlebars. They’re fairly sensitive. “This is a lot harder than it looks,” Smith says, and watching his kart go driving off-road, cutting corners off each lap, sort of bears that out. A button in the centre of the handlebars is for special items like banana peels, shells, etc.

But this is hooked directly into a Super Nintendo console. No emulators, he says. A commenter suggested that he use Donkey Kong Jr in his next demonstration. “I could barely win with Mario,” Smith says, “handling the awesome speed that is DKJr would have killed me.

Another video shows him playing a Flash game in which he controls a tank, switching from drive mode to a gunner mode, with the pedals controlling both the tank’s acceleration and gatling gun. Check it out.