What’s The Fine For Necrophilia In Cyrodiil? 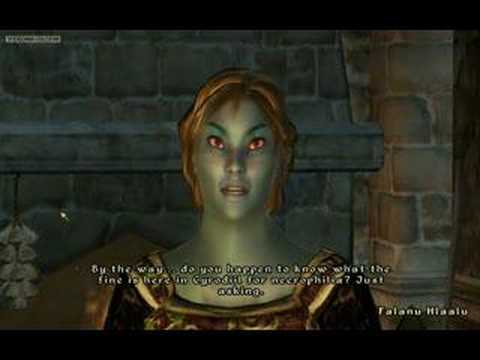 Great moments in gaming humour finally makes it to The Elder Scrolls! Just because series stars a silent protagonist doesn’t mean it has to be a dour, humorless affair. It can be an affair with a corpse as well!

Falanu Hlaalu, alchemist of Skingrad, puts the dark in Dark Elves in this brief exchange from The Elder Scrolls IV: Oblivion. The non-player characters in Bethesda’s 2006 masterpiece might have all been voiced by the same handful of people, but Falanu manages to set herself apart from the crowd with her unique… hobby? Sexual orientation? Exercise regimen?

Oh well, as long as the fine is modest and the mood is right, what happens in Cyrodiil stays in Cyrodiil by order of the Imperial Legion.