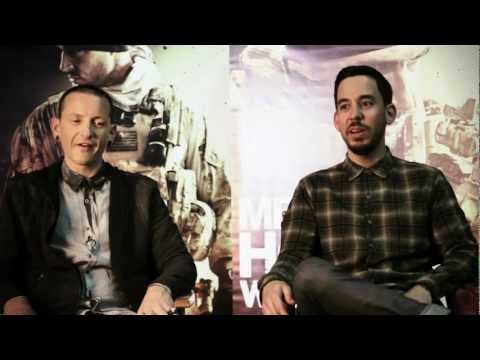 It’s not about Linkin Park. It’s not so simple as that. I don’t hate Linkin Park or anything. I mean, they’re not really my thing musically, but I don’t think they’re one of those offensively bad nü-metal bands or anything. They’re not Nickelback, okay? (Clearly Call of Duty must have locked up the exclusive with them. Heyo!) But seriously, they seem like super nice guys, like good people. They like video games in a real, non-bullshitty way. They’ve worked super hard to build a successful music career. Props.

But this isn’t really about Linkin Park. This is about the cross-promotional campaign that Electronic Arts is waging for their upcoming kinda-sorta realistic military first-person shooter Medal of Honor: Warfighter. I know You’re omniscient, God, so I’m sure You’ve already seen the above video. You have, no doubt, noticed that it teases the release of a music video. (I know! We do that now, I guess.) Though hey maybe, in managing the weather and the outcome of baseball games and overseeing several armed conflicts around the world, maybe You got distracted and didn’t manage to watch it yet? If so, I implore You to watch it again, just so I can get a much-needed second opinion. I’ll wait.

Did You watch? So… yeah. Can You see where I’m coming from here? It’s a video about the making of the video for a song, “Castle of Glass.” The video will supposedly capture the personal struggles of the men and women of the United States Armed Forces. It isn’t out yet, so I guess we don’t know what it’s about.

“I think that the song, that the feeling of the song, is gonna work really great with the game,” Linkin Park’s Chester Bennington says, half a question, half a statement, his sights seemingly set on coming up with as noncommittal a sentence as possible.

Can You understand why this thing makes me feel so… well, so spiritually exhausted?

“The song itself speaks to a lot of things,” says Medal of Honor executive producer Greg Goodrich, who likely spent a good deal of time recently making sure that the part in the E3 demo where the unmanned robo-tank tears through a warzone killing dozens of dudes worked properly. “It speaks to the community, it speaks to service, sacrifice, brotherhood. And all of the things that [the soldiers depicted in the game] are going through overseas.” As he talks about a Linkin Park song that we haven’t heard yet, the video intercuts footage of a likely staged military funeral and some white military tombstones.

And I know that You probably already know the chorus to the song, which does seem to be about a man dealing with the hard realities of coming home from war, with lyrics like this:

Take me down to the river bend

Take me down to the fighting end

Wash the poison from off my skin

Show me how to be whole again

Fly me up on a silver wing

Past the black where the sirens sing

Warm me up in a nova’s glow

And drop me down to the dream below

And I’m sure You’ve probably wondered what that really has to do with action-packed first-person shooters, too. And as much as You want to believe that Medal of Honor: Warfighter will capture the harsh toll that war takes on a person, You probably are as doubtful as I am. We’ve both been burned so many times.

Look, God. I know I’ve become more cynical over the past year. And I try every day to fight that, to remain positive and open and not to pre-judge. But can You understand why this thing makes me feel so… well, so spiritually exhausted? Why when we see shots of a rock band jumping down in front of a green screen intercut with footage of actors dressed as soldiers handing a folded flag at a funeral and everyone is talking about how this song and music video is the result of some grand vision and not a calculated effort to get people to spend $US60 on a video game… when someone says that this endeavour is somehow more, that it is, quote, “more than just like, ‘Hey, let’s put EA and Linkin Park together and make noise”… well, can You see why I want to just throw up my hands and call bullshit on the entire thing?

And can You see why I kinda have to view this alongside the fact that EA use the game’s website to promote the purchase of insanely powerful real-world guns and then half-assedly backed away from that after public criticism, can You understand why the whole thing comes off as painfully calculated and cynical? How far it lands from everything that I like about music and everything I like about video games?

Music and video games have so much in common. The push and pull, the rhythm and flow, not to mention the way that the songs from our favourite games stay with us for the rest of our lives, taking us back to those moments when we first played. But this, this weird promotional pseudo-documentary about a band being paid a lot of money to write a rock song for a video game that almost can’t help but fail to live up to the promise of showing us the reality of wartime… we didn’t need this. Did we? We didn’t.

So, please, end this Linkin Park/Medal of Honor promotional campaign. Let them release the video, let it be as good or bad or mediocre as it is no doubt going to be. Let us watch it and ruefully chuckle about how little it has to do with the actual game, as it maybe shows us some bloodless gameplay and cutscene footage that is in no real way indicative of the bloodsoaked headshot-fest that we are 95 per cent certain the game will be. Let the video be included on a DVD bundled with the collector’s edition, and let it live on on YouTube forever. And then, let it fade away, never to be spoken of again.