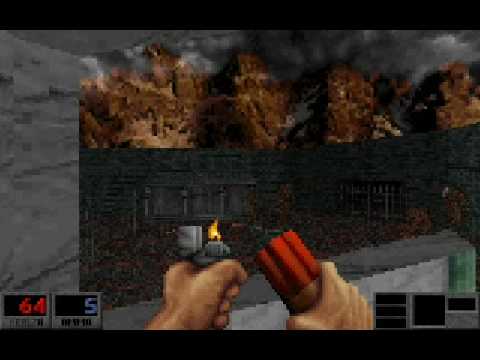 Ah… there’s nothing quite like setting bad guys on fire with a flare gun or dual-wielding double-barrelled shotguns. These were regular activities in the 1997 DOS shooter Blood, created by Monolith Productions and built on Ken Silverman’s BUILD engine — the same tech behind Dukem Nukem 3D. A forum post by former Monolith CEO Jason “Jace” Hall suggests the studio co-founder wants to bring out a free, enhanced version of the original game.

A few days ago, Hall wrote a post on Blood fan site The Postmortem, describing tentative plans to breathe new life into the 15-year old title. He’s not interested in a remake, more a face-lift and revamp of the game’s ancient source code — much in the same way Doom source ports like ZDAEMON for Doom have kept id’s classic FPS kicking around:

My name is Jason (Jace) Hall and some of you may know of me.

I have been contemplating the idea bringing Blood back and was wondering how people might feel about it or if they were interested in helping me to do it.

To be clear, I am thinking of bringing the ORIGINAL Blood game back as it was, with functionality alterations/enhancements that are similar but superior to ZDAEMON’s. I would also make it work on all platforms, and not just PC. There are other things as well…

I have a very specific vision in mind for what I’d like to do, but before I go off and do it — I wanted to speak directly with the Blood community and see what the thoughts are.

My goal of course is for this all to be free, and all about gameplay and fun. You can rest assured that I have the resources to bring BLOOD back properly but like I said, I’m hoping to have the community participate in all this if it wants to so we can all do it together. This site is great and it would be great to see the Blood community grow!

In a later post, Hall explains that he’s confident he can get “all the support” needed to make the project happen, including sorting out any lingering legal issues. “You guys don’t have to worry about that. There is no problem there,” he states.

Hall mentions that it will be funded entirely from his own pocket and there are no plans to charge for it. He’s also keen to release it on multiple platforms — the original was built for DOS, so yes, it’ll definitely need some work to get it running fine on Windows 7… let alone iPhone, Android and whatever other operating systems Hall is eyeing off.

Greetings to the Blood Community [The Postmortem, via Blue’s News]