Why Do These People Insist On Talking Over This Assassin’s Creed III Footage? 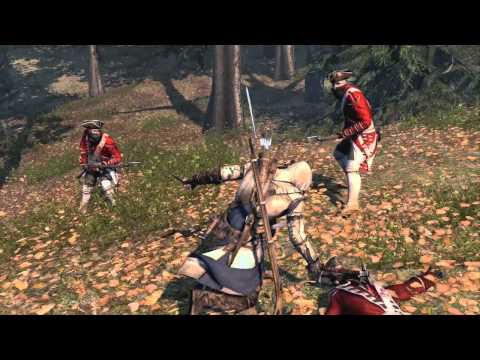 Game developers, Revolutionary War experts and voice actors band together in a concentrated effort to interrupt ACIII gameplay clips at every turn, in this first instalment of Inside Assassin’s Creed III, a four-part series with a great deal of talking.

I realise Ubisoft wants to give people insight into the development of Assassin’s Creed III, telling us all about the amount of time it’s taken, how much dev-lopping they’ve been doing, how much power is left in their warp core and other fun game-making tidbits. I appreciate that they’ve talked to real Revolutionary War experts instead of basing their version of the conflict on comic books and that one Schoolhouse Rock episode.

And, in case you hadn’t picked it up, I really love the way the word “developer” sounds with a French accent.

I am fine with all of that! I just want to watch the game. It’s pretty.

I know! Release the series with two videos for each chapter, one of people talking, and the other just two minutes of gameplay footage. That way I can appreciate them separately and not ignore the talking completely at all, nope nope nope.