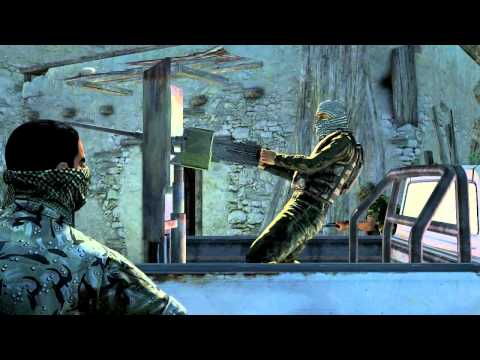 the latest trailer for upcoming Blacklist

“Everyone can make kneejerk reactions to a vertical slice of the game that are really uninformed as to what the whole experience is like,” Blacklist director David Footman told Eurogamer last week. “We really have to be patient as we roll out each item about the game.

“The proof is always going to be in the pudding. Talk is talk, and it is just all talk right now. We really need to get a demo out there, for people to see how you can ghost levels, to see the gameplay. It seems to be an overreaction because people are just seeing the ‘pow!’, the explosiveness.”

Ubisoft, this is a problem, and it’s not with your fans. It’s with your marketing. Assassin’s Creed III has run into similar (if not as upsetting) issues with its trailers’ YEAAHHH AMERICA tone, this despite the fact the people making the game say the actual game’s not like that at all.

If there’s more to Splinter Cell Blacklist’s very essence, then show it. You can skimp on characters and settings all you want, but if a trailer can’t even sell a game’s tone accurately, what the hell is it selling?

It’s almost tragic. Drip-feeding us content is one thing, but for a publisher’s marketing arm to think it’s a good idea idea to withhold such basics as what a game’s like is crazy. How dare we see an action-filled trailer for a video game and assume that video game is full of action!

To then call fans’ reactions “kneejerk” and “uninformed”, as though this kind of thing is normal – it’s not, even in the perverted world of games marketing – only makes things worse.

Splinter Cell: Blacklist response has been a “kneejerk reaction” and “uninformed” [Eurogamer]