Professor Layton Vs. Ace Attorney Gameplay Is An Interesting Mix Of Old And New 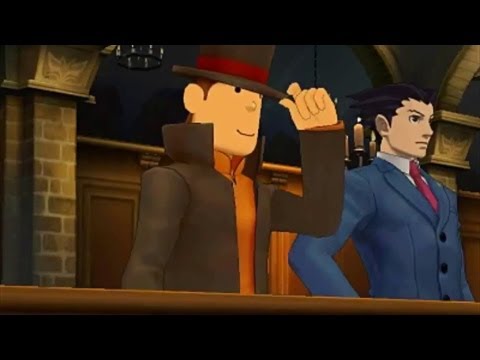 As you play the game, you constantly switch between Layton and Ace Attorney style gameplay. The Layton side of the game plays almost identically to other recent entries: you go from area to area in a town, hunt for hint coins in the background, talk to people, and then solve the puzzles they have for you. The Ace Attorney side, on the other hand, has more than a few interesting design choices that deviate from the style of the most recent games.

Instead of using the lifebar system that the Ace Attorney games have used for the last several games, Professor Layton vs. Ace Attorney brings back the original “five exclamation marks” that signify how many chances you have to present the right evidence at the right time.

In addition to the old style of witness testimony, there are now multiple-person testimony sections. In these sections, you not only listen to the testimony of each individual but also watch the reactions of the others in the group as they listen to the current speaker in order to ferret out crucial information.

But perhaps the most interesting thing to come from the merging of these two series is the ability to use Professor Layton hint coins in the middle of a trial to get a hint on what to do next.

To see what the game looks like in action, just check out the video above.

Professor Layton VS Ace Attorney was released in Japan on November 29, 2012, for the 3DS in Japan. The game has been confirmed for an international release sometime in 2013.