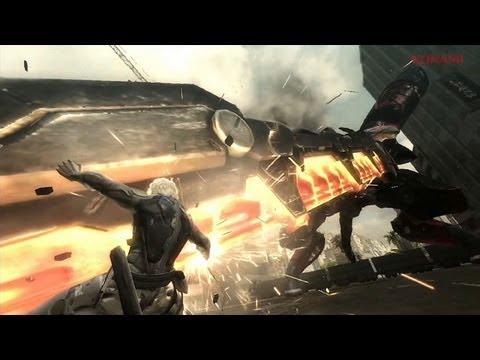 Metal Gear Rising Revengeance will be hitting stores in less than three weeks, and anticipations are high. In this week’s Weekly Famitsu, Platinum Games producer, Atsushi Inaba and director Kenji Saitou along with Konami’s Kojima Production producer Yuuji Korekado and scenario writer Etsu Tamari sat down to talk about their upcoming Metal Gear.

Metal Gear Rising is an ambition project for Platinum Games, taking place after the events of Metal Gear Solid 4. One of the reasons the game features multiple stages (so far Africa, Abkhazia, Mexico, and Denver, Colorado have been revealed) is so people can see what the world after Metal Gear Solid 4 is like. Said Tamari, “The other reason is because as an action game, Saitou requested stages for several different situations.” Added Saitou, “When you have lots of exciting situations, that adds to the motivation to play the game.”

Platinum Games is famous for stylish high-octane action games like Mad World, Bayonetta, and Vanquish, and Metal Gear Rising looks to have all that distinguishing Platinum Games packed into it. “All we in development can do is hit the accelerator and keep it pressed.” explained Inaba. Of course this is not without its consequences for other members in the team. “There was some pretty crazy stuff too.” recalled Tamari with a laugh. “Requests like ‘we want to make it so cyborgs can’t detect you if you’re hiding under a cardboard box, so could you think up some logical reason why that works?'”

Metal Gear Rising‘s most impressive feature, the slicing mechanic turned out to be one of the hardest parts for the development team. Not for the actual slicing itself, but the physics of what happens after an object is sliced in a certain direction led to the developers taking some licence with the laws of physics. “If you cut something diagonally, the top part slides down, so that’s not a problem,” explained Saitou. “but when you cut it horizontally, the cut plane is flat, so it sits there. Against cyborgs, if you do that, there’s no satisfaction. So for when you slice cyborgs, we added specific reactions rather than leaving it to physics engine calculations. Of course, this led to detailed discussions on how things would react satisfyingly when you cut them how and where…”

Based on feedback from last summer’s Tokyo Game Show as well as the demo released last December, the development team at Platinum Games have been constantly tweaking and re-tuning the game so as to be enjoyable for not just action game veterans, but casual players who enjoy the Metal Gear world itself.

Apparently, the completed game will have a vastly different feel from the previously released demos. On last minute addition was the “Easy Assist Mode” that was added to the game’s Easy mode that make the parry/counterattack system semi-automatic. This “Easy Assist Mode” was something the development team felt was necessary to allow less experienced players to get through some of the more difficult battles but simultaneously balanced to keep the game fun to play.

Rather than have players get frustrated and stop playing mid-way through the game, the idea was proposed and implemented two weeks before the game development deadline. “For us who helped develop the game, we were worried at first if having the Easy Assist would make for an enjoyable game.” said Tamari. “But when I actually played the game, I was surprised that even though it was easier, I could still experience the fun of the game properly.” Well, we’ll get to see the results for ourselves in less than three weeks.

Metal Gear Rising Revengeance is scheduled for release in Australia on February 21.