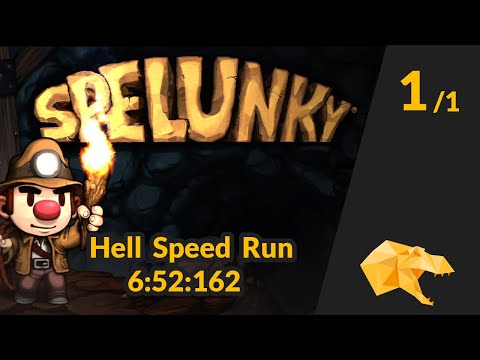 
Spelunky is a game I play deliberately and with great care because of the fact it features no savepoints and you lose all of your items when you die. The Ghost is a constant feature of my exploits. Watching someone blaze through it is impressive enough; realising he’s doing so without previously acquired knowledge of the map and enemy placements goes even further.

Most Spelunky speedruns depend on three ingredients — the compass (pointing the way to the exit), the jetpack (acquired in the first shop raid) and a crapload of bombs, which speedrunner Bananasaurus_Rex stumbles across on Mines 1-3. He still has to go the whole way without dying, and the shotgun-packing shopkeepers will be on his arse, in addition to all the other threats, if he doesn’t.

There are a couple of hair-raising close calls. At 1:44 he gets hit by a trap arrow, but shakes it off and goes untouched the rest of the way until opening the Moai with the Ankh and restoring full health. Obviously, if this is being posted, then he probably pulled it off. And he does, despite confessing “I’ve only fought [King] Yama, like, twice in my life.” He polishes off Spelunky‘s ultimate boss in 35 seconds for a final run of 6:52:162.

While there are other speedruns out there in faster times, they conclude at the City of Gold. Hell is a hidden set of four levels beyond that in Spelunky‘s HD version, accessible with the Book of the Dead. Bananasaurus_Rex thinks his time is a record for a Hell speedrun for Spelunky HD but knows that, hey, records are made to be broken (and someone else out there may have done it faster already.) For now, sit back and watch this guy straight-up shame you with his skill.