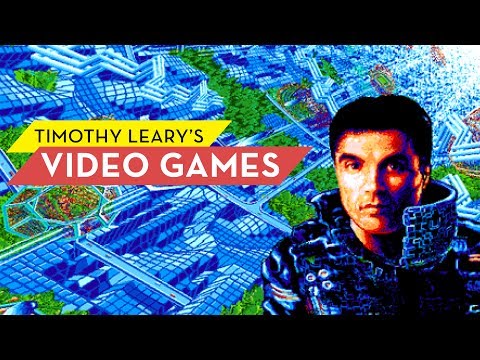 Timothy Leary became a household name in the tumult of the 1960s as an all around anti-authoritarian who advocated psychedelic drug use as a means of spiritual growth. He coined the phrase “Turn on, Tune in and Drop Out”.

But in the mid-1980s, Leary’s emphasis shifted away from psychotropics and towards technology. He released a game, Mind Mirror, which he saw as sort of an interactive extension of his previous work. He also optioned the book Neuromancer and attempted to make a game called Neuromancer: Mind Movie that included a who’s who of famous talent, including Grace Jones, David Byrne, Keith Haring, Devo and William S. Burroughs.

In the video above, I sat down with Don Mennerich, digital archivist for the New York Public Library. They have been working to digitize the extensive collection of the Leary Estate, which includes several unfinished or in-alpha games, most in half-working, as well as extensive notes, letters and papers. We talked about the theoretical games, the process of digital archiving, and the importance of making ephemeral data truly last.

Update: Some people seem to be having difficulty watching the video. If you are still having difficulty, try going directly to this link. Alternately, here is a backup copy in an alternate player: