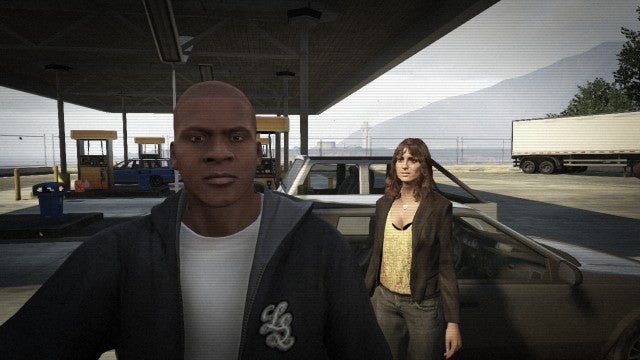 The daughter of the mobster who brought down John Gotti is suing the makers of Grand Theft Auto V for $US40 million alleging a minor character in the game was based on her life story and it was used without her permission. Karen Gravano says "Antonia Bottino", (pictured in the background above) whom the player rescues in a random encounter called "Burial", at the far north of the map. Gravano appeared on the first three seasons of VH1's "Mob Wives" reality show and her lawsuit says she's publishing another book about her life soon.

Gravano's father was Salvatore "Sammy the Bull" Gravano, a Gambino family underboss who in 1991 cooperated with federal prosecutors in the trial of Gotti, probably the most notorious latter-day American gangster. Gravano's testimony helped get Gotti a life sentence; Gravano received a five-year sentence for his activities, then went into the federal Witness Protection Program, moving out west to Arizona.

In Grand Theft Auto V, Antonia Bottino is the daughter of Sammy Bottino, who is never seen but whose story is told by Antonia. Sammy Bottino, according to Andrea, was an underboss in the Gambetti Family who had been the right hand man of boss Jon Gravelli. Bottino took his family into hiding out west after being set up on murder charges stemming from a Vice City hit. Bottino later took a plea agreement and became a government informer. One of his enemies seeks revenge by having Antonia Bottino kidnapped and buried alive at the dirt bike track out in Paleto Bay, which the player thwarts.

It's not clear from the lawsuit whether Karen Gravano says she was ever kidnapped by her dad's old enemies or threatened with being buried alive. The suit says she's publishing "a second book containing the parts of not-so known aspects of the story used by" Rockstar Games.

A Rockstar Games spokesman told the New York Daily News that the company does not comment on legal matters.

In November, TMZ reported that Lindsay Lohan had contacted her attorneys to discuss either demanding money from Rockstar or suing them over the use of her likeness in Grand Theft Auto V. TMZ implied that Lohan thinks the bikini model appearing on the game's cover was her.

In 2010, Michael "Shagg" Washington, a former backup dancer for Cypress Hill, sued Rockstar for $US250 million, alleging that Carl "C.J." Johnson, the protagonist of 2004's Grand Theft Auto: San Andreas, was based on him and was an unauthorised use of his likeness. A judge tossed that suit in November 2012.

And in 2008, a federal appeals court threw out a lawsuit brought by the strip club PlayPen, located in East Los Angeles, which alleged San Andreas' Pig Pen club was based on it. Rockstar conceded that the club was modelled somewhat on the PlayPen, but the court said Rockstar's actions were not enough to warrant an infringement claim.