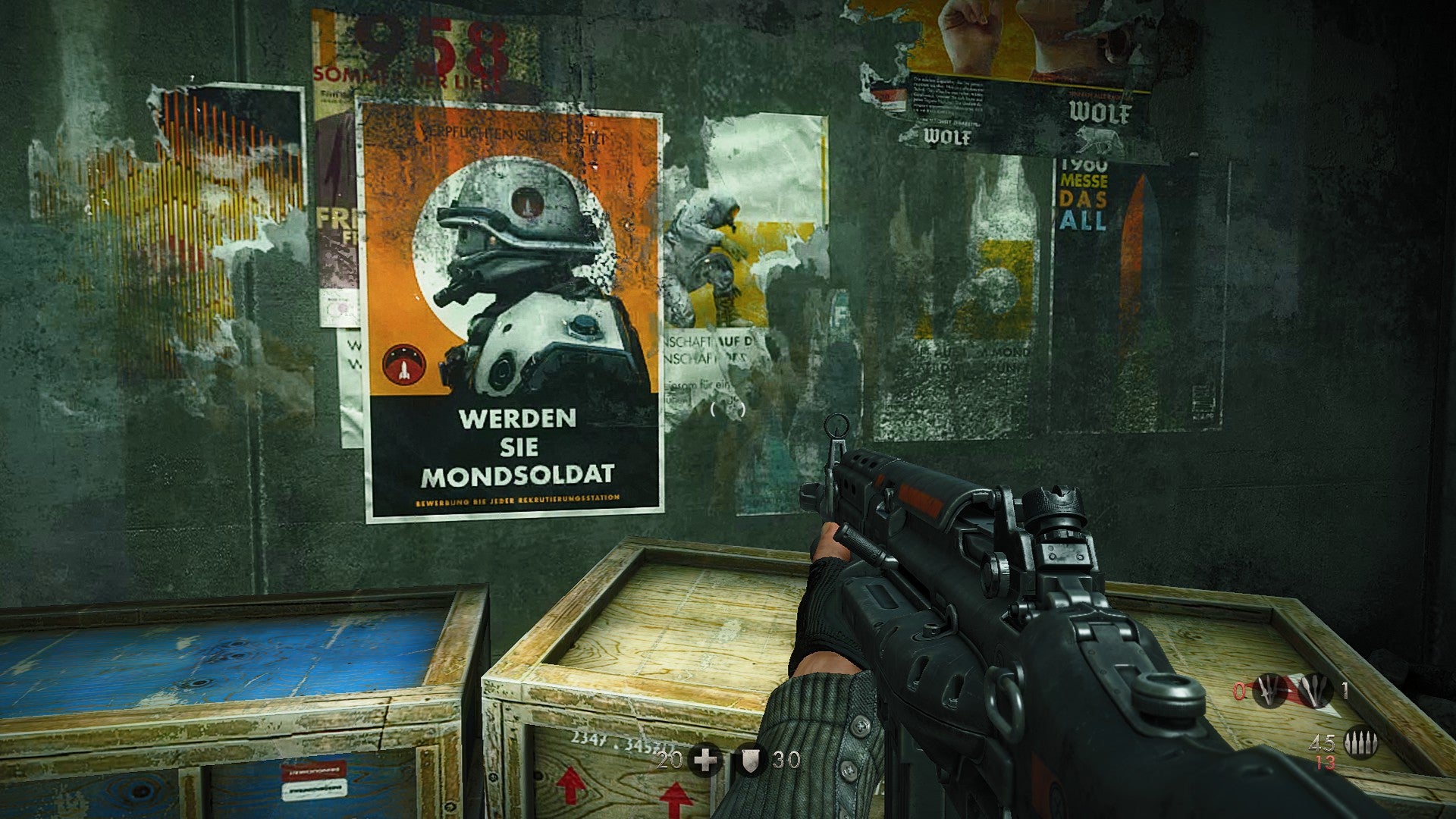 A lot of times, when I’m playing a game that I’m going to write about, I take notes. For Wolfenstein, though, I tried something different. I took a ton of screenshots instead.


Why? Because so much of what I loved about this game was in the moment. So think of this as part-impressions, part-diary, part-travel journal to a 1960s where the Nazis won, and everyone in occupied Europe speaks English.

Now, note that there will be spoilers ahead. MASSIVE SPOILERS. These screens will cover the entirety of the game, start to finish, so if you’re planning on playing it and want to remain unspoiled (which I recommend, since there are some nice touches towards the end), get out of here.

If you’ve played it already, though, or are just curious to see more of the game at a more pedestrian pace, read on.

Only a few minutes in and I’m hating this game. It’s all explosions and fast cuts to explosions and weird little moments like this and I’m worried that this is just going to be a bad Call of Duty clone, only with giant robot dogs.

Still, the nods to the original are appreciated. Not only is this a dark castle, but there are Nazi paintings, and secret passages! 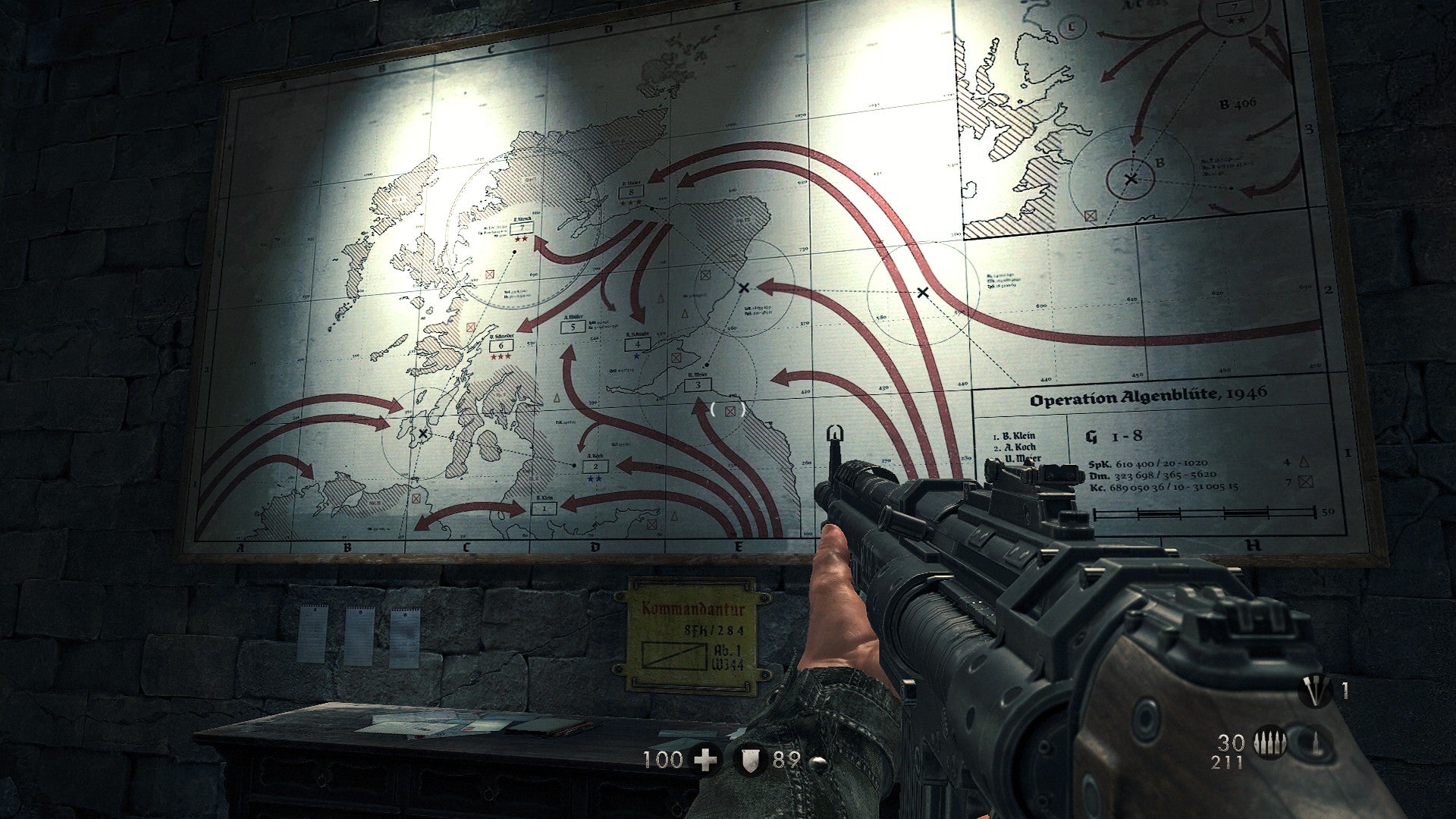 Ah, our first look at the game’s villain. You can tell he’s the villain because he’s not just a Nazi, he’s a Nazi in a fancy uniform.

But we don’t get to touch him. Instead, after waking up from a 14-year coma, we get to touch this Nazi instead. I hope you haven’t had your fill of gratuitous video game torture scenes…

Note: having spent a ton of money last year on new console hardware, my PC is starting to show its age. I had to play this game on “medium” settings. It looked pretty damn good for “medium”.

So here’s a weird thing. After torturing that dude and killing some more Nazis, you end up on a train, and this sex scene kinda comes out of nowhere. It’s not the first time it happens, either, that the game will chug along with a certain tone for 2-3 hours then be interrupted by 30 seconds of “huh well that seemed out of place”.

Most of Wolfenstein is spent in contained stages. Prisons, buildings, submarines. You rarely get to stick your head up and see a glimpse of the larger, wider world. When you do, though, it’s pretty impressive.

The gunplay in this game is OK. It doesn’t have Halo’s expression or Call of Duty’s sharpness. But that’s fine, because like other games that these guys (when many of them were known as Starbreeze), a lot of the enjoyment comes from the slickness. And these kind of 24-esque cutscenes are slick.

A future Nazi poster. There are thousands of them scattered throughout the game. Whoever designed them did a fantastic job, because they are fantastic.

Another sweet poster. And some cool 60’s tech.

BJ and his lady friend makin’ out. I liked this scene because, unlike almost every other kissing scene in video game history, it looked like two people kissing, not two mailboxes clattering together.

My favourite screenshot. Seriously. Just look at that computer! It’s one of the coolest things I’ve ever seen. If I had to imagine what future science space Nazis of the 1960s would be typing on, that’s exactly what I’d imagine.

Know what this game doesn’t do well? Death camps. While the overall tone of a camp you later find yourself trapped in is as Riddick as this Riddick-esque game gets, a section where you’re destined for the ovens alongside some emaciated corpses feels tasteless and tacked on, as though the developers felt like they had to cover the subject, so threw in a cursory mention that you soon stroll right past and never revisit.

Warhammer 40K called, the Orks want their stuff back.

This long cutscene, where you get to know one of your crazy resistance colleagues, is one of the best-written and most endearing moments I have ever sat through in a video game. It’s worth the price of admission alone.

So of course it’s soon followed by another abrupt and out-of-place sex scene.

There’s a part in the game where you go into space. And visit the moon. It’s terrific, especially when it comes to art design, soundtrack choice and even fancier Nazi uniforms.

I love this. They (the developers, not the Nazis, though I guess it’s both) designed special space toilets that you only see in the space level.

You crash-land from the moon in the middle of London. You know what it means when you find enormous arenas that are empty except for a ton of health packs?

If I was going to describe exactly how this woman wound up wearing a Deus Ex costume, we’d be here all day. So let’s just say the Jews aren’t represented in this game the way you’d think they are.

The last thing I thought I’d give a shit about in Wolfenstein turned out to be one of its strongest suits: the characters. None are terribly original, but they’re delivered with such gusto by their voice actors (and look so great) that most will have won your heart by the end. Just…prepare for some tears.

Also prepare for the c-bomb.

The game concludes in a stage that may not be called Castle Wolfenstein, but come on. That’s what it is. And I like this new take on it. Less amateur spooks, more brutalism.

Shame, then, it ends with two boss fights. Both of which suck, even if the first one has a strange moment of tenderness to it. And yes, it feels as strange typing that given the context of this game as it must reading it.

The final boss. Guess what happens when you press MOUSE3.

The game actually ends of a bit of a downer after two boss fights, which is a shame since one of the best things about it was the fact that it had such incredible pacing. Most games pack their best parts towards the front because that’s when you have to hook people.

If you didn’t read it, you can check out Mike’s more formal appraisal of the game here.

And that’s it! If people dig this kind of thing then the next time a game comes along I’m playing through I might do it again.