Fable Legends’ Four Vs One Is A Lot Of Fun

fable legendsHands Onimpressionslionheadxbox one
To sign up for our daily newsletter covering the latest news, features and reviews, head HERE. For a running feed of all our stories, follow us on Twitter HERE. Or you can bookmark the Kotaku Australia homepage to visit whenever you need a news fix.

Fable Legends is one of those games that doesn’t quite make sense until you get your hands on it. Fable is such an intrinsically single-player experience for a lot of us that imagining it as a co-op action game requires some mental gymnastics. Once I had a controller in my hands and four other people around me, though, I was pleasantly surprised by how well it works. A four-player arena combat game might not sound much like Fable, but its fairytale artistic direction, humour and good-natured sense of fun scream Fable with every breath. It’s Fable meets Dungeon Keeper, essentially.

Legends is set during Albion’s Age of Heroes, when there was a hero in every tavern rather than a select few Chosen Ones around the land — conveniently, that allows for a large selection of different playstyles in the form of different characters. Some are tanks, with big swords and bigger shields. Others are support characters, with magic or necromancy. There are some tuned to ranged combat, and others to combo-building. I saw five at Lionhead’s offices a couple of weeks before E3, each with a very Fable personality and dialect (I was especially found of the female Yorkshire tank). 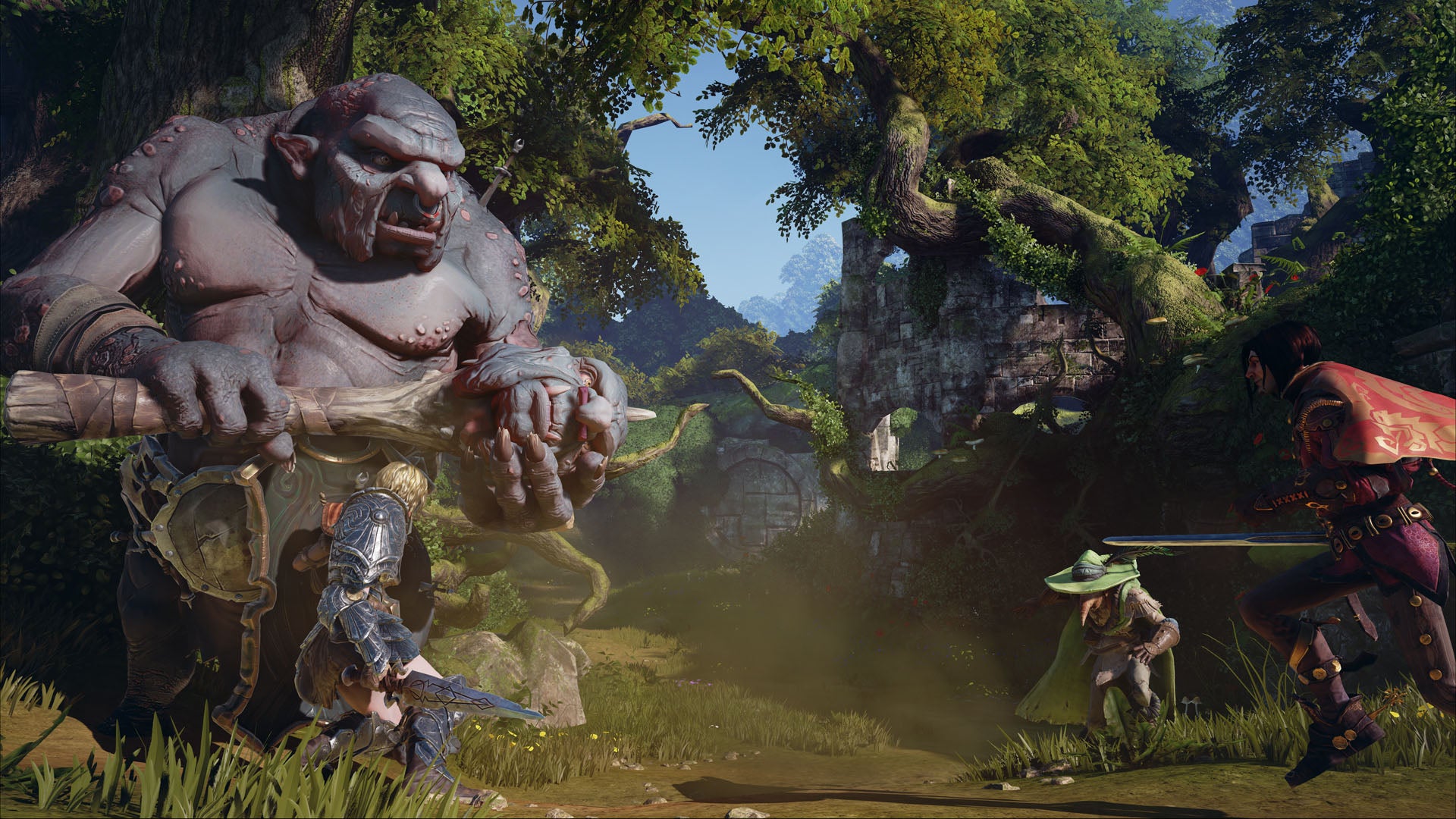 Each of Fable Legends’ levels is a sequence of gated arenas full of various baddies placed there by the Villain, the fifth player, who can also manipulate the layout by raising and lowering gates. For the heroes, the challenge is survival; for the villain, the challenge is to surprise your opponents. Together, the heroes can dispatch any individual enemy with ease, so the villain must split them up or catch them off-guard. When you’re playing a Hero it’s a third-person action game; as a Villain, it’s an RTS. The villain has around a minute to set up each arena, and when the heroes arrive it’s all about adapting on the fly.

It’s worth mentioning at this point that there’s no Smartglass-enabled tablet required for any of this. Lionhead seems keen to distance the game from Smartglass at the moment, possibly because a lot of people assumed after the Gamescom reveal that Legends was only playable with a tablet. Happily, that’s not true; RTS controls traditionally do not translate well to a controller, but Legends manages it competently, if not quite elegantly. Placing enemy units is intuitive, and once the battle begins different special abilities are mapped to the face buttons, letting the villain rain down artillery magic or send a group of goblins mad with bloodlust. 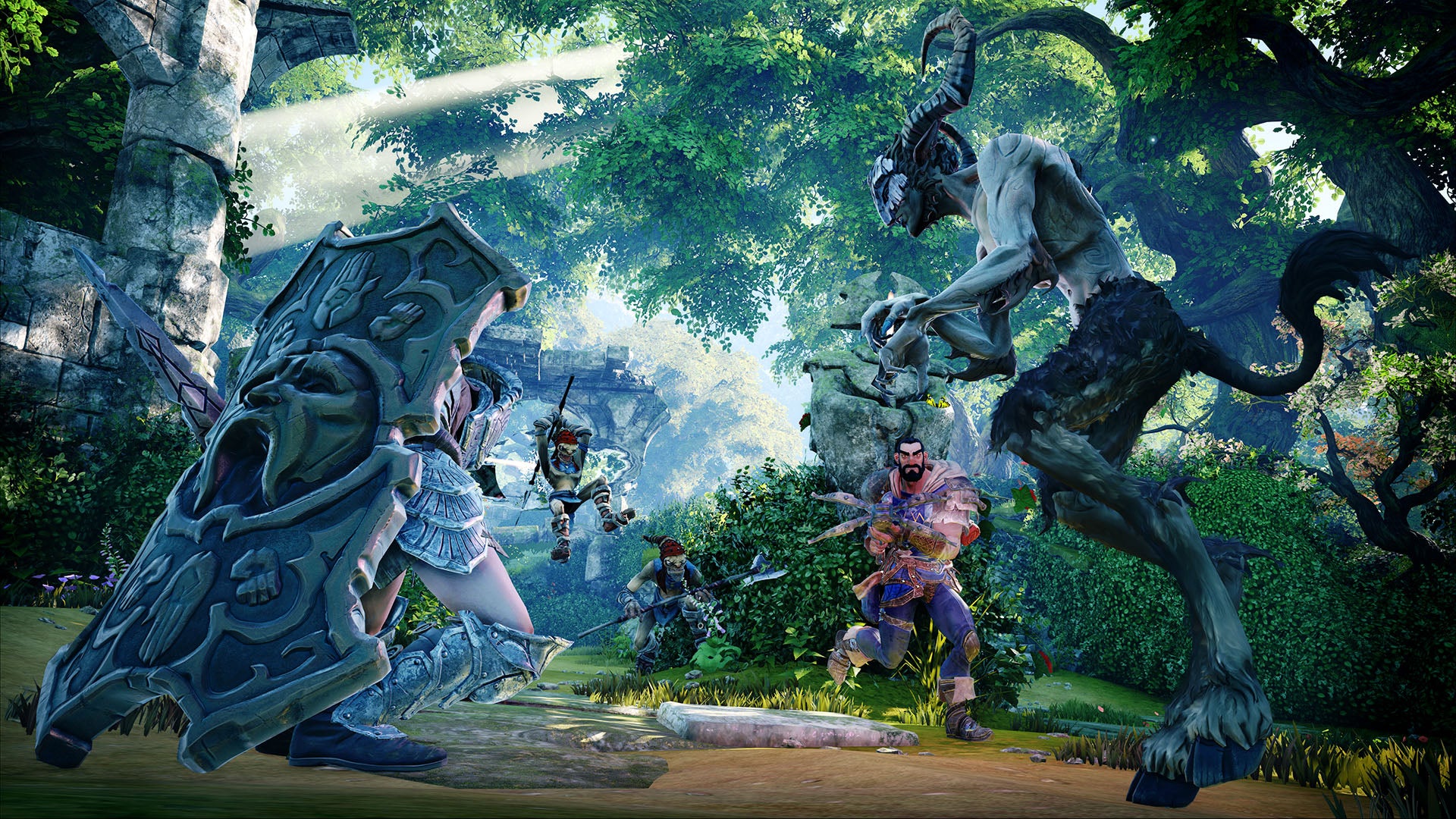 I tried my hand at three different heroes; a rapier-twirling Prince Charming type with annoyingly perfect hair, a gruff, Northern, hulking crossbowman, and a necromancer all in ragged robes, with a strange leather mask in the shape of a long beak. I found Charming boring to play — he was all about building up combos, which is a little technical for me, and his chat was rubbish — but the crossbowman was more exciting. Playing as him, the game started to feel like a colourful, fantasy Gears of War, and I rather liked his pessimistic outlook. My favourite, though, was Leech the necromancer, who sucks the life force from enemies and then uses it to either conjure entertainingly gross magic, like jars of leeches, or heal the other heroes. It’s a take on the support/healer class that I haven’t seen before.

The way that Legends’ levels are set out means that it’s almost inevitable that they build to a climactic finale, with the heroes low on health and the villain throwing everything they have got at them in the final arena. Victory feels hard-fought and worth celebrating, but often we’d get painfully close to the magical artefact at the end of the level before our final hero fell. One time we were literally inches away from the damn thing. From both sides, it’s tense and exciting. That four vs one dynamic is a winning formula (for 2K’s Evolve too). 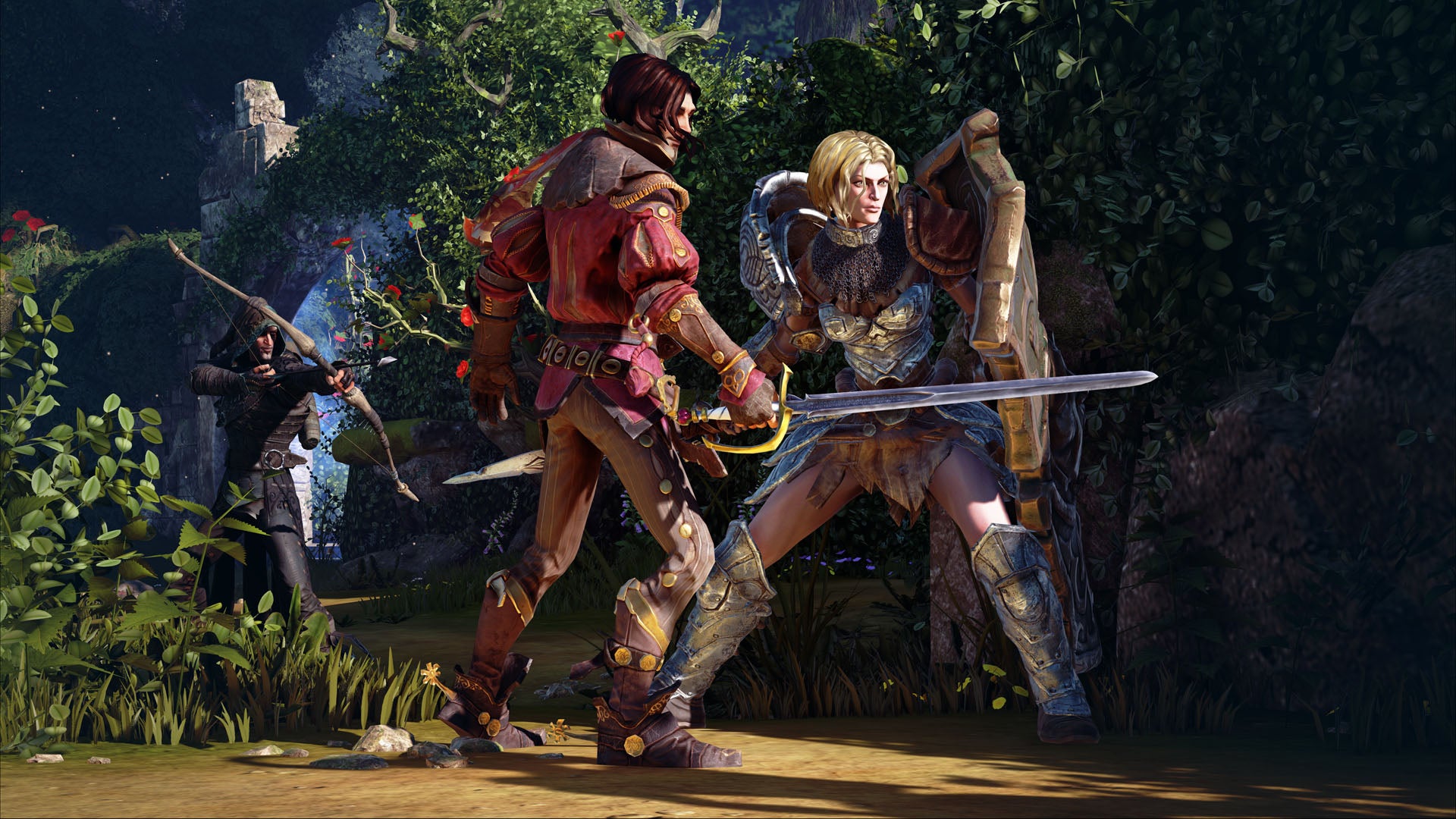 For me, playing the villain was most rewarding. I figured out at one point that I could injure the heroes by raising wooden gates as they were walking over them, turning them into spike traps. The heroes quickly got wise to this, dancing warily around lowered gates, so I’d send enemies around behind them and cackle diabolically. I hid an artillery goblin behind a wall in a corner of the map, firing high-damage shots at the heroes for about four minutes before they found him and killed him. I lured the group into a dead end to stall for time, busying them with low-level goblins so that I could set up a more complex ambush nearer the exit. It was great. They barely survived long enough to get to the final showdown.

Fable Legends will need balance in its player-base. Being the villain is more involved than smacking things about with a sword; the 4:1 ratio assumes that most players will want to team up together rather than lay out traps and command goblins. If there’s no villain around, the game fills in for them, but that’s inevitably less challenging for the heroes. Before playing Legends I thought its problem might be that nobody would want to be the villain, but afterwards I’m wondering whether everybody will want to be the villain.

Lionhead has made a fun game, here, but one that relies entirely on groups of players bothering to make the most of it.

Lionhead has made a fun game, here, but one that relies entirely on groups of players bothering to make the most of it. There’s a defined story woven through the individual missions — details are thin on the ground, but it seems like there’s one story that adapts slightly depending on which hero you’re playing — but it’s not the choice-and-consequence driven story that we’re used to seeing from Albion. Then again, Fable’s choice and consequence has always felt a little thin to me. It will be refreshing to play an authored story, with defined characters rather than a schizophrenic player who fights evil but has six different neglected wives scattered across the land.

I wasn’t convinced that Fable Legends would work. It’s based entirely around combat, after all, and I don’t think you’d find many people who thought that the combat was the best thing about Fable. But Legends’ combat is almost unrecognisable, entirely rebuilt around the idea of co-op, and meanwhile the things that were already great about Fable are here too: the lush green forests and tumbledown towns and spooky ruins of Albion, the characterful dialogue and personality, the fairytale ambience. Perhaps it’s because I wasn’t entirely expecting it to already be fun at this early stage, but I’m impressed by how well it’s coming together.