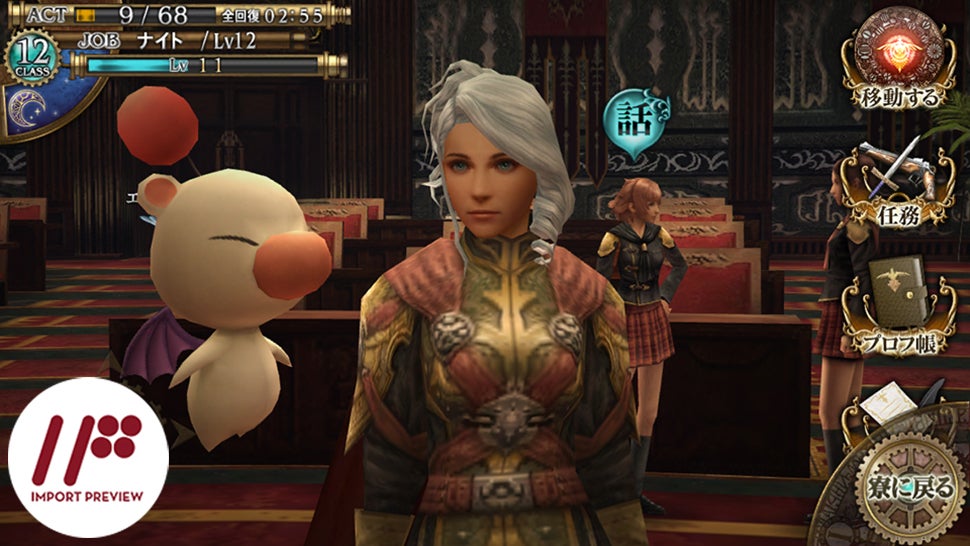 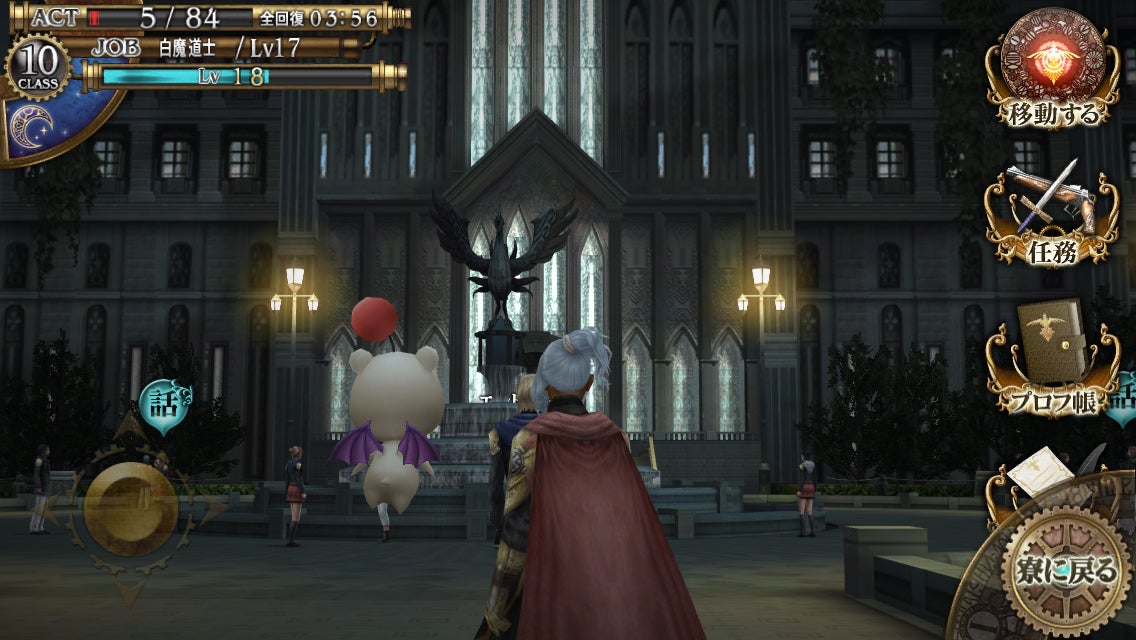 Final Fantasy Agito takes place in the world of Type-0 and thus reuses many of the same locales, characters, and monsters. In fact, the vast majority of the game’s assets are torn directly out of Type-0 and reused wholesale. 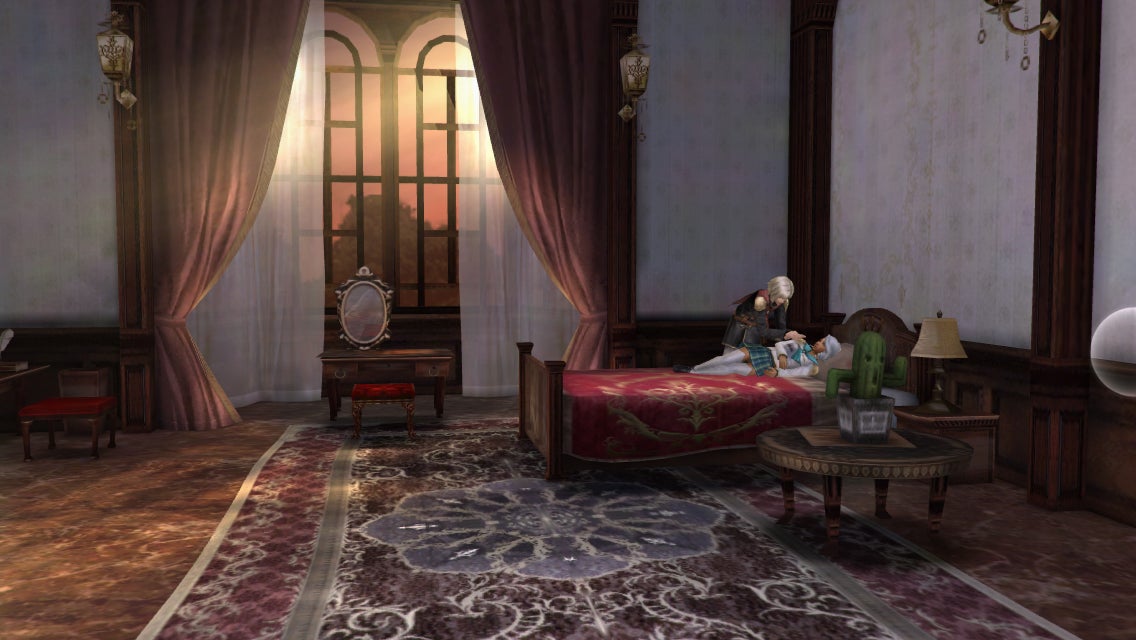 You begin the game by creating a character who is a student at the Peristylium, a magical academy. From there you are free to wander the school, meet the other students — including the cast of Type-0, and pick up collection missions, before heading back to your (quite spacious) room. 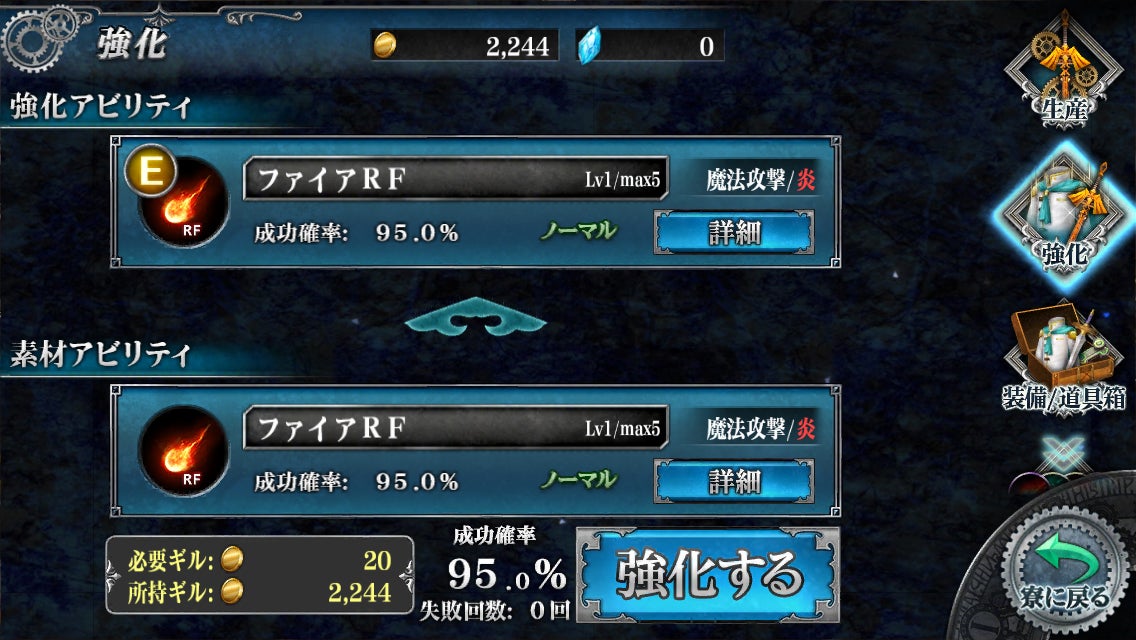 Once in your room, you are able to craft new magic, weapons, and armour as well as equip them. When ready, you can select a mission, choose your party of two computer-controlled copies of real players, and get to fighting. 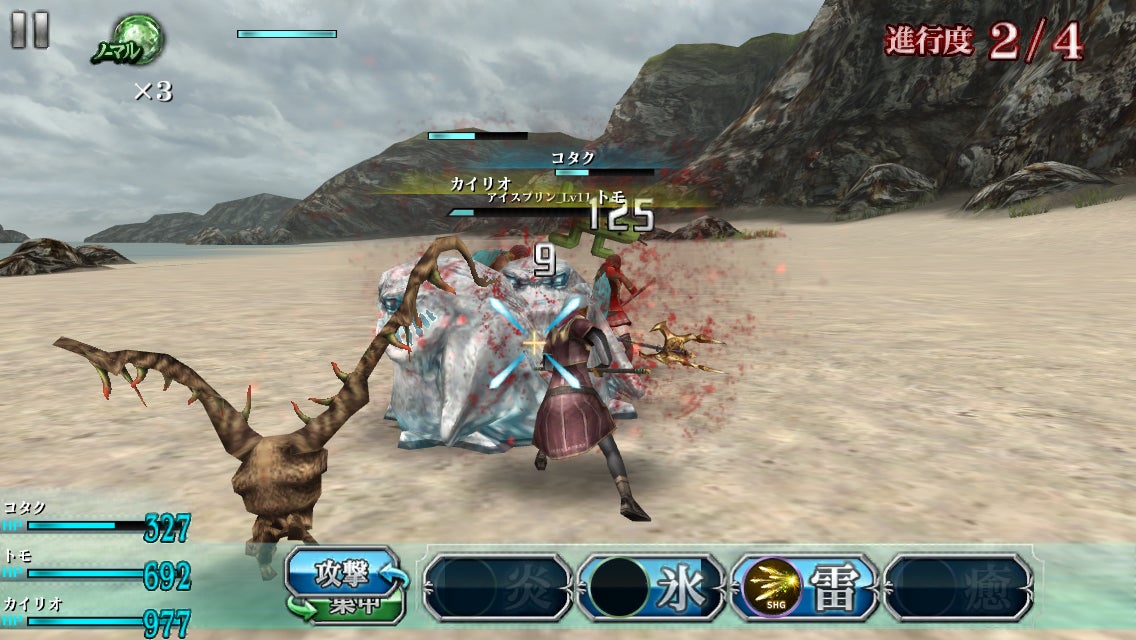 There are two types of missions: story missions, which deal directly with the game’s ongoing plot, and side missions. Story missions can only be played once but the side missions can be completed multiple times. In fact, they have to be done multiple times to unlock the next side mission — though this is far from being a problem as you’ll want to run many stages many more times than the minimum requirement so as to gather up crafting materials and new recipes — of which there are a ton. 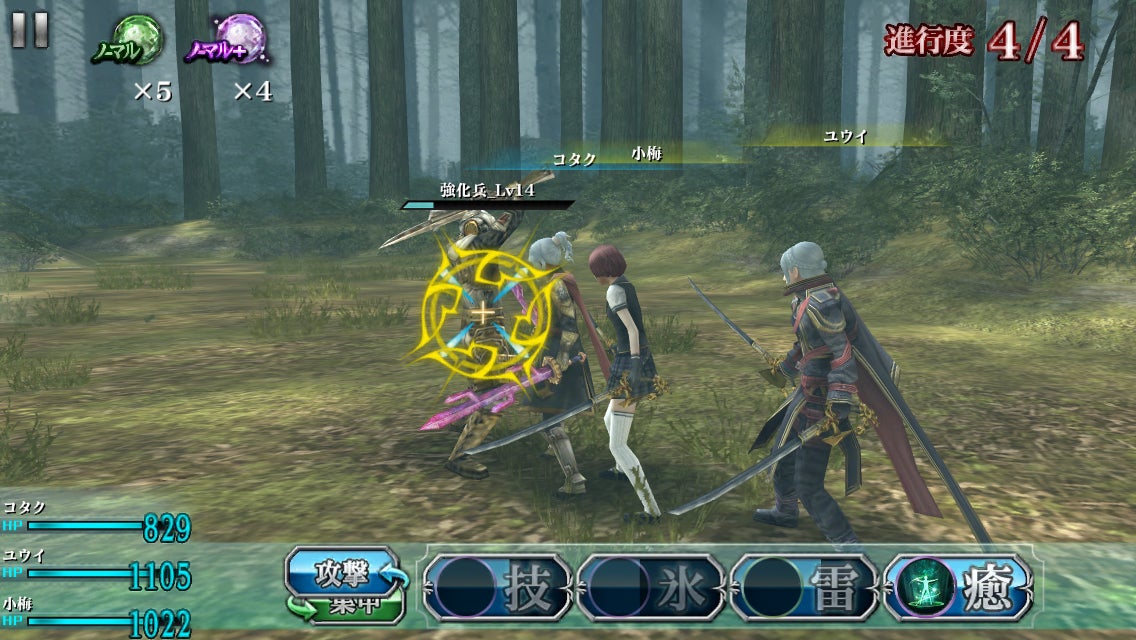 Each mission is composed of four stages, each with a wave or two of enemies. In battle you tap the monster you want to attack to lock on and then your character will auto attack based on the speed of its weapon (magic gun, dual sword, or lance). Occasionally, the enemies will expose a weak point, allowing you to get an extra powerful critical attack in if you tap it quickly enough. 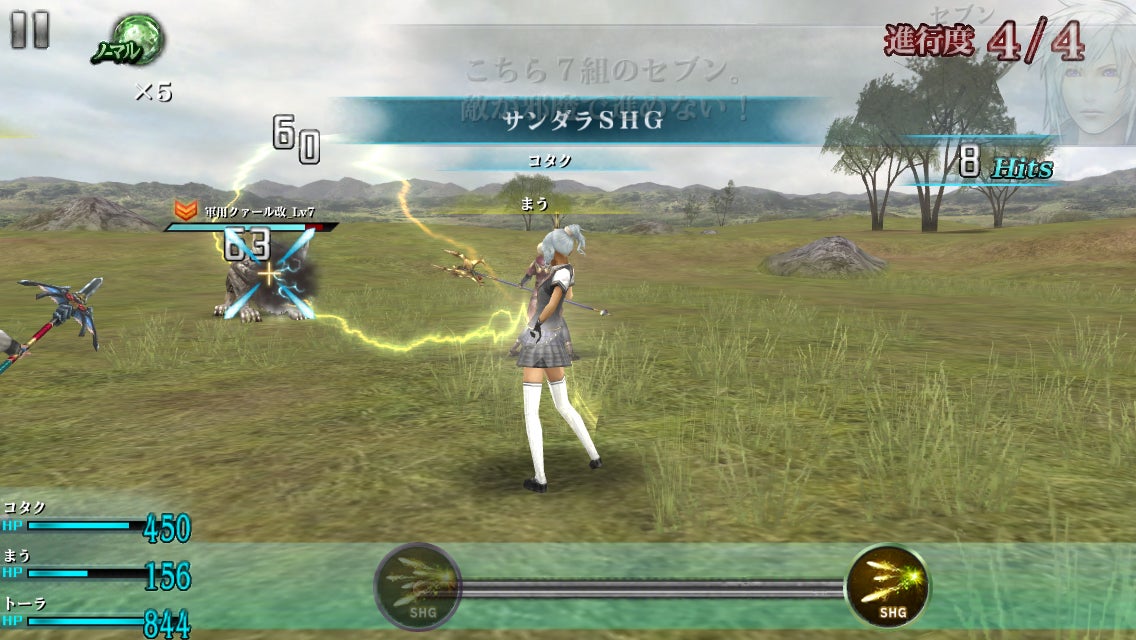 At the bottom of the screen you have four slots for your equipped magic and skills. If you tap one, the skill will activate and afterward be temporarily un-selectable while on cooldown. However, this doesn’t mean you can only use four skills in battle. Rather, you can equip up to five spells per one slot and then when you activate said slot, all five go off in a chain. Of course, the cooldown increases proportionately. 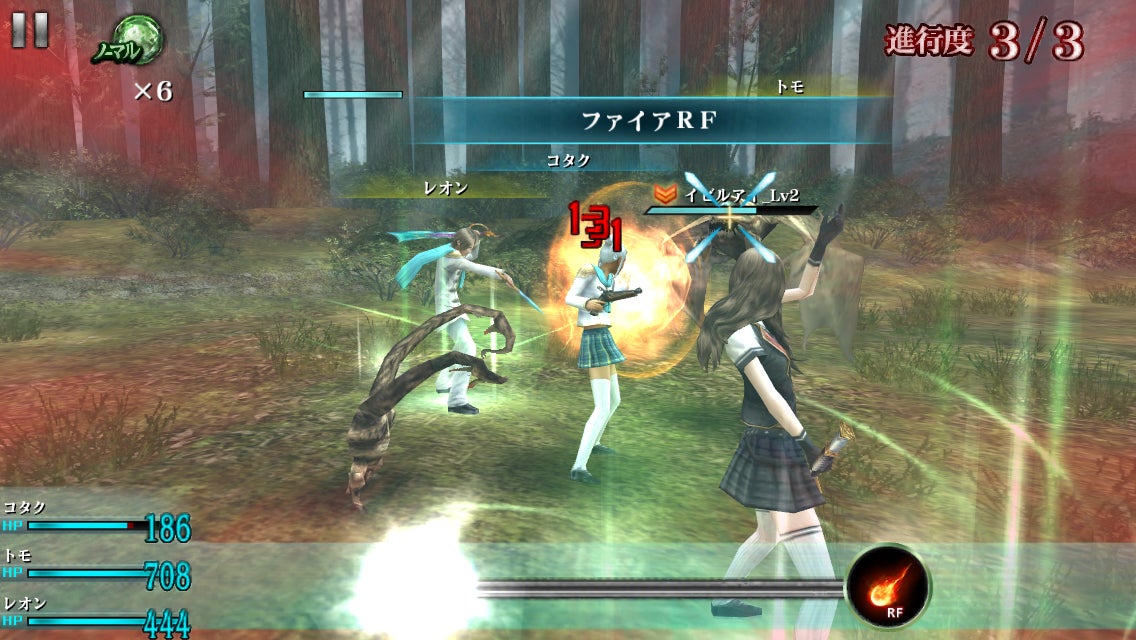 Cooldowns are quite lengthy in Agito; however, there is a way to mitigate this. Next to the skill slots is a linked blue/green button. Tapping it switches you from attack mode to preparation mode. In preparation mode, you no longer automatically attack (nor do your party members) and you can’t perform weak point attacks. However, your HP regen and magic recovery speed increase dramatically. 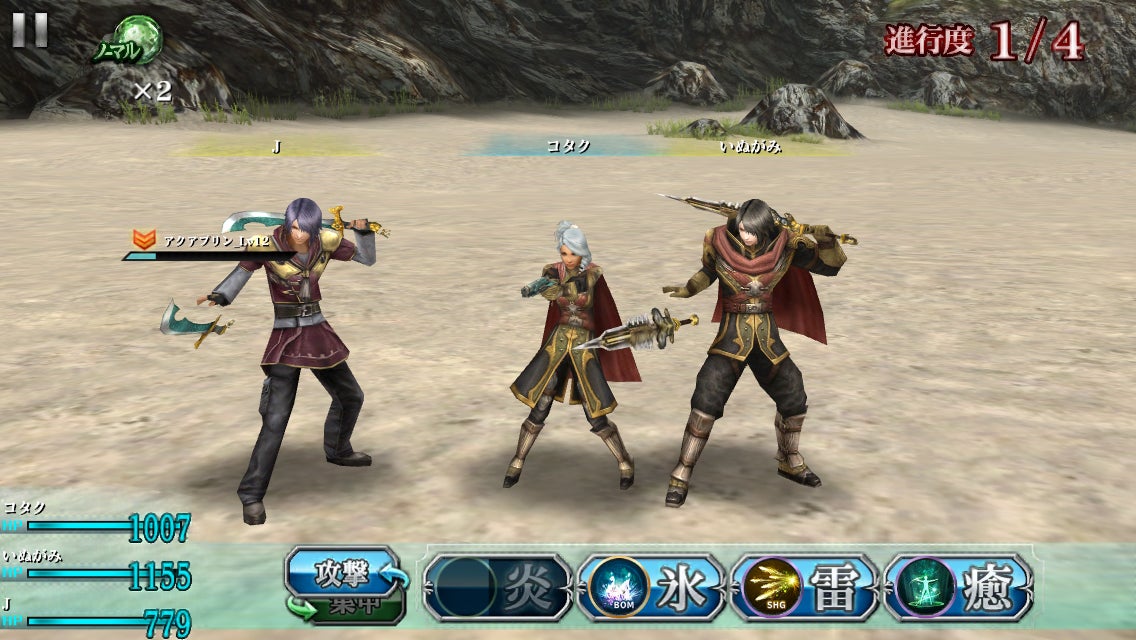 Of course, everyone fails sometimes. If you die in battle, you have to either give up, forfeiting your unused energy, rewards, and exp or use a rare/costly phoenix down to continue. 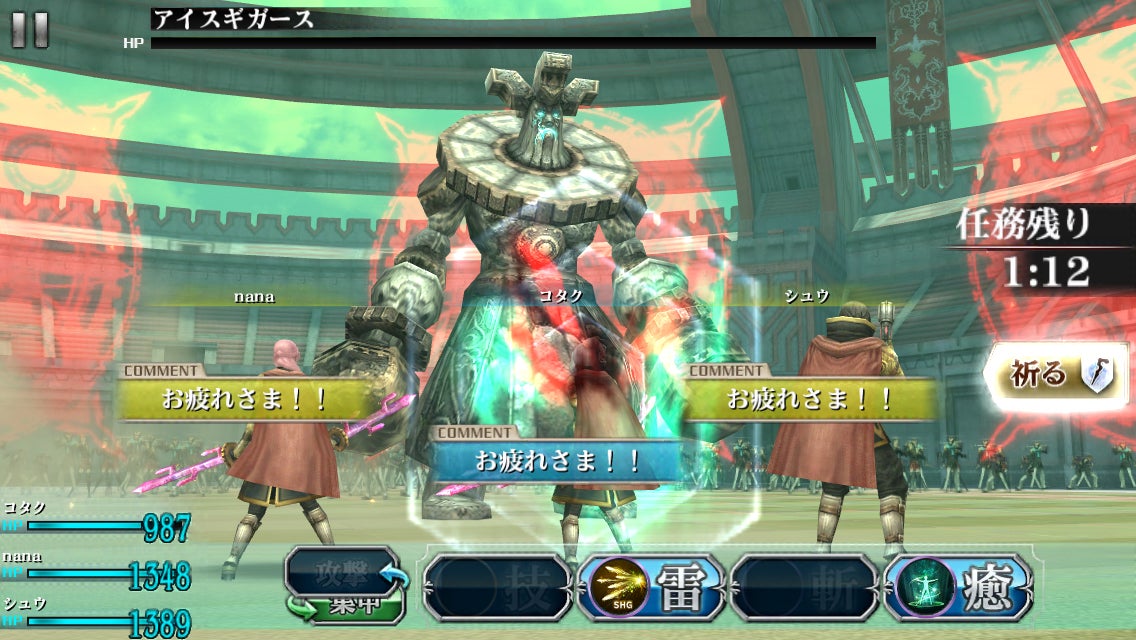 In addition to the normal battles, there are boss fights that happen every few days. For these battles, you pick two computer-controlled players like in the normal missions and fight the boss. After you deplete a certain amount of its HP, you withdraw and get your rewards. You can fight the boss repeatedly but while the boss starts at level one, it goes up a level each time you challenge it. Also, while you are battling it, numerous other players are also fighting the boss at the same time. So when the boss’ overall HP is depleted, the boss is dead and can no longer be challenged. (This last weekend, it took about six hours before the players killed the boss). After the battle, players are rewarded additional bonus items based on their performance. 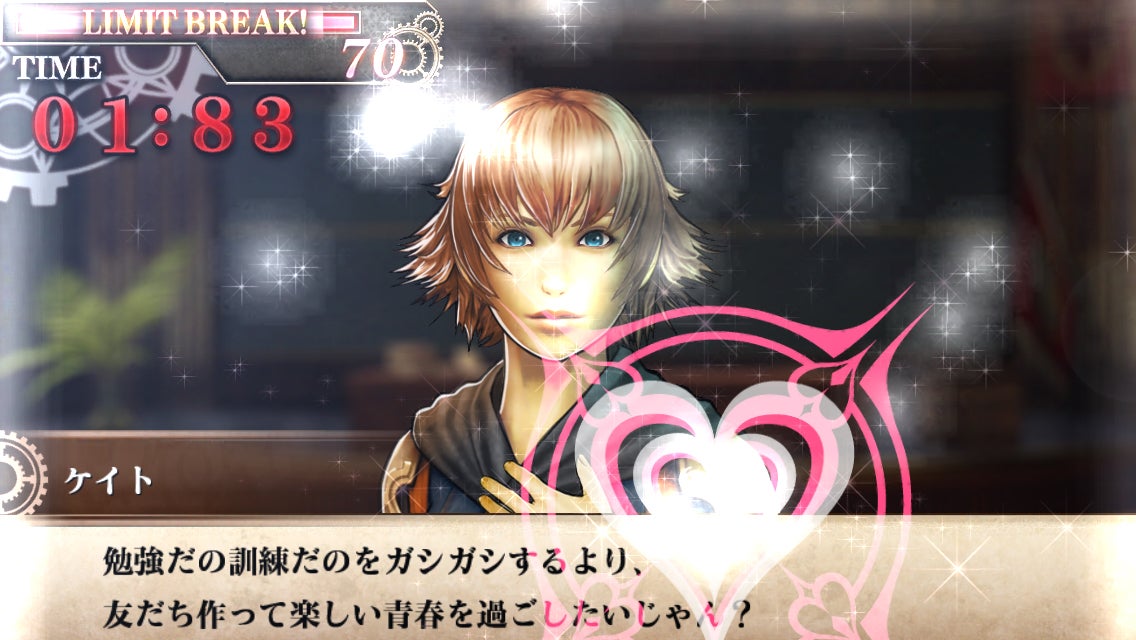 But while Agito is free to play, it does have a micro-transaction system. Like many games of this type, you are only able to do a certain number of missions before your energy runs out. Then you can either wait for the energy to come back naturally over time or use items (which can be purchased from the in-game store for real money) to refill your energy instantly. 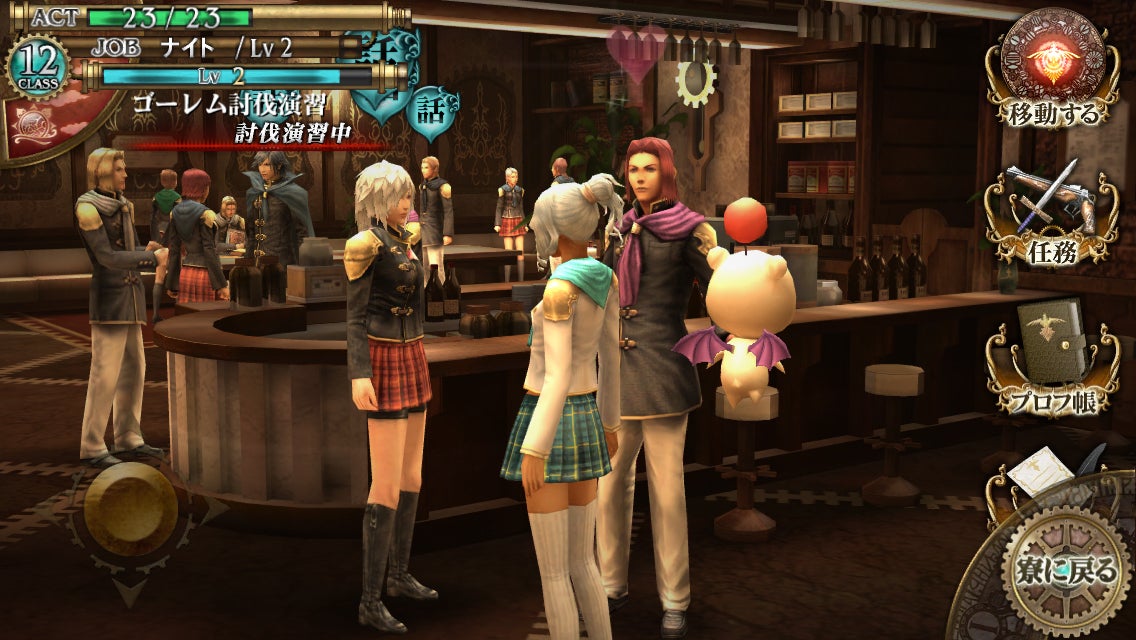 Really, there are only three things to spend real-world money on: potions, which restore energy; phoenix downs, which allow you to continue a battle you have died in; and time resetters, which allow you to retry any crafting or upgrading attempt you previously failed. (You can also use real money to get a random item, spell, or crafting material, but it’s a real crap shoot.)

However, while you can buy these items, you also get them by doing collection missions, making friends, and simply logging in every day. Frankly though, this is the first micro transaction game where I haven’t really felt hampered by not spending money. 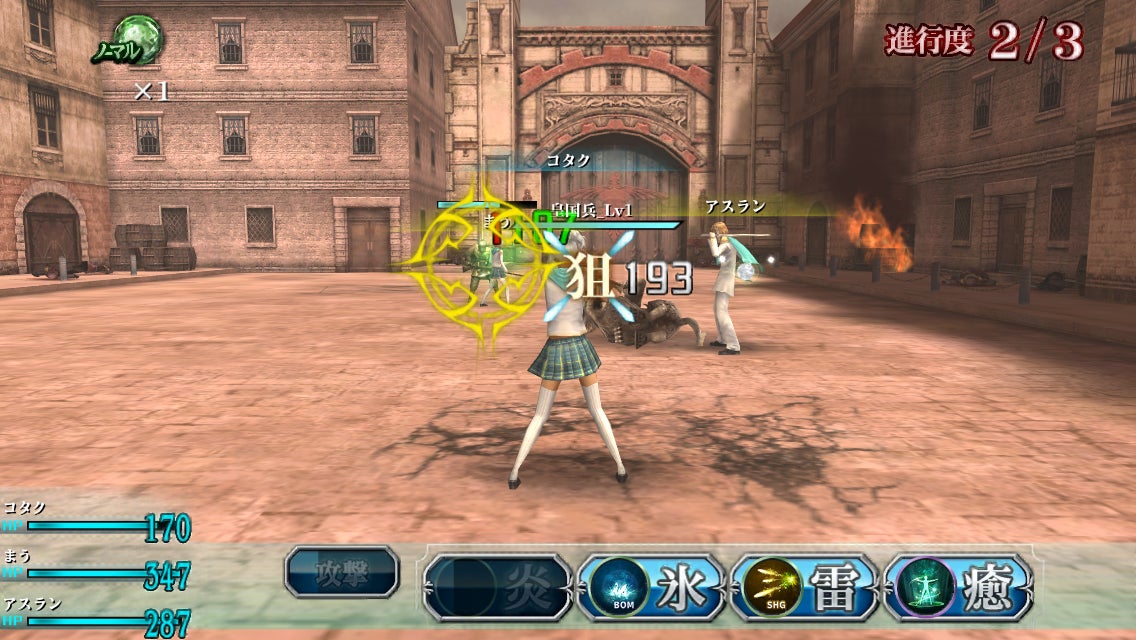 In the end, Final Fantasy Agito is far beyond what I expected going in. It has entertaining and strategy-filled battles, an evolving plot and characters, and tons of back-end customisation. Best of all, while I can see how buying things with real money would make playing a bit easier, I don’t feel totally outclassed as a person who has bought nothing — a first in a freemium title for me. Final Fantasy Agito is a game that has earned a place on my phone and is one I plan to continue to play for the foreseeable future — and that’s possibly the highest recommendation I can give.

Final Fantasy Agito was released on iOS and Android in Japan on 14 May, 2014. It is scheduled for a Western release sometime in the foreseeable future. 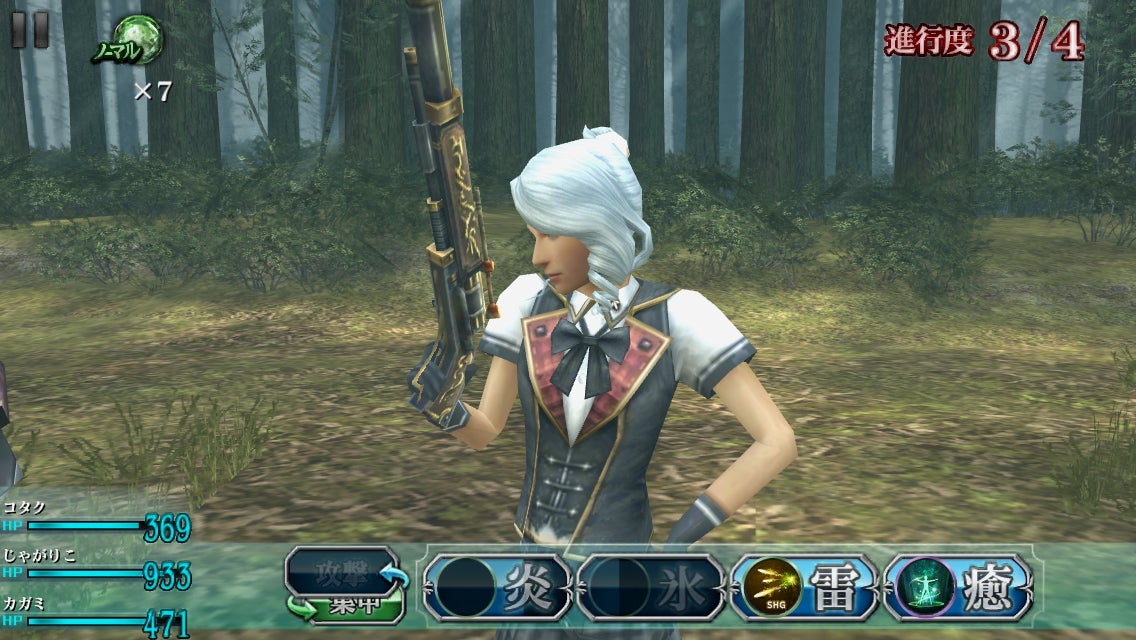