Some Players Are Hunting Down Minorities In Watch Dogs 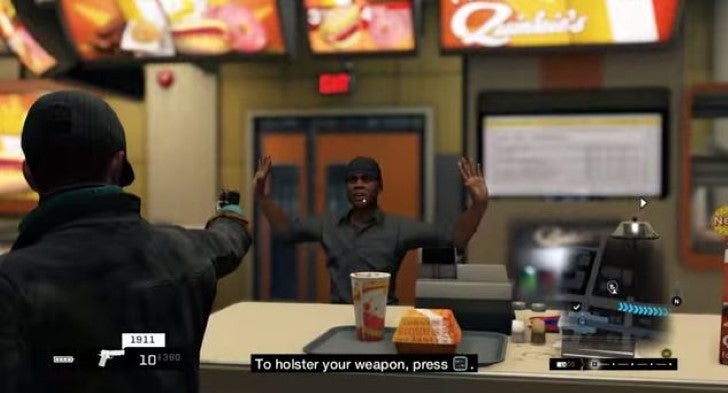 If you've seen screenshots or footage of Watch Dogs, then you already know what sorts of information Pearce mobile phone app, the Profiler, tells the player. Here's one example:

You'll note that the Profiler tells you a character's name, their age, their occupation (and sometimes their income), as well as one random fact about the character. The fact can be anything, from interests and hobbies to sexual preferences and everything in-between. It might not seem like much, but this information is genuinely changing the way people play and think about the game.

This was apparent before the game even officially out. Back when the game had leaked ahead of its release, Kotaku received an email about players who hunted down certain characters in Watch Dogs. Most footage of this nature was taken down by the time we caught wind of it, but there were still at least one screenshot floating around that purported to show characters that players targeted...

It wasn't long until more footage like this popped up, though. Here's an unsettling video titled "Making the World a Better Place," which was uploaded by user Moopoke. It shows players gunning down characters based on the information the Profiler displays:

Call me cynical, but the fact some players would do things like this doesn't surprise me. I doubt it surprises Ubisoft, either. Open-world games are highly popular in part because players use massive worlds as playgrounds to cause havoc in, and NPCs have always suffered at the hands of jerk players. There's no way Ubisoft couldn't anticipate that players would go on rampages. This predilection for havoc makes it hard to give kudos to Ubisoft for including underrepresented characters. Sure, they're included — but at best the most they can be is potential victims, not interesting or complex characters.

More recently, Ethan James Petty, a scriptwriter on Watch Dogs, tweeted that he "can't wait to see how you guys abuse our poor npcs in #WatchDogs . Be sure to take screenshots!" When confronted by game developer David Gallant about the fact that players were using the Profiler in disgusting ways, Petty seemed to shrug it off. "[That's the] sick reality we live in - people's privacy reduced to facts," he explained. "Profiler at its core *should* be offensive to everyone."

Petty went on to note that the Profiler also opened up the option of letting players protect minorities from crimes, and that the game actively punished players for killing civilians — though the latter fact is hardly reassuring. It's not like "the cops might come after me" really stops someone from committing crimes in an open-world game; part of the thrill, I'd say, is figuring out how to deal with the consequences of breaking the law.

In that sense, what we're seeing in Watch Dogs isn't entirely new: some people still approach open world games with an unhinged attitude. The difference now is that the characters/victims can be actively profiled, and that can make certain kills in the game more disturbing than they'd be if the character was just a nameless NPC.

It is worth noting that, in general, players seem to use the information for "good" — or at least, as defined by their own moral system. Mike Williams of US Gamer, for instance, has written about how the Profiler influences what sorts of things he does in the game:

That NPC is an investment advisor making over $US100,000 who just got back from vacation; I'm fine skimming a bit off the top of their bank account. Is that thug an animal lover making under $US25,000? I'll just knock him out instead of putting a bullet in his head. Hey, that's a nice car and you don't believe in evolution; I'll take that $US500 off your hands. There's whole sections virtual Chicago where I try commit no crimes: the high-poverty Wards and the blue collar Brandon Docks. I figure they have enough issues, without me taking their money, vehicles, and lives.

In an informal Twitter poll, people liked to tell me about the ways the Profiler allowed them to "Robin Hood" the game, as it made it easier for players to tell what characters "deserved" to be robbed/killed/hacked.

You'll probably hear a lot about the moral ways that people use the Profiler. Just don't be surprised if you occasionally hear about the unsettling ways people use it too.