Soul Blazer, An RPG Where You Play God's Servant 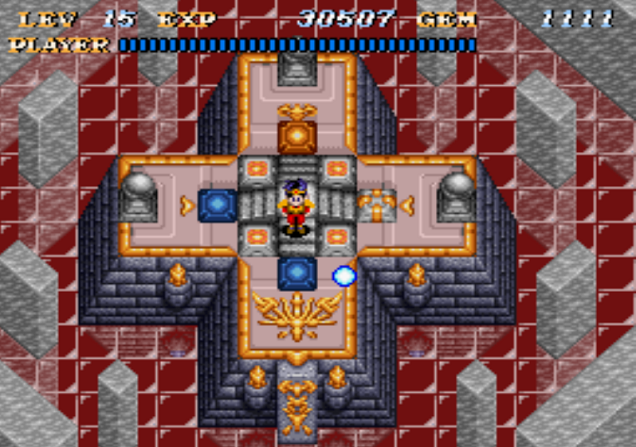 Earlier this month I spent a whole bunch of time playing Soul Blazer, a video game about mermaids and talking plants. Hopefully you did too. Soul Blazer is the first game in what is affectionately referred to as the "Quintet trilogy", named after the long-defunct Japanese studio known for making some pretty great action-role-playing games. The next two games in the series, Illusion of Gaia and Terranigma, are far more interesting. Soul Blazer is the worst of the three.

That's not to say this is a bad game — it's just kind of... routine. You, playing the servant of a god (referred to as "the Master," probably because of old-school Nintendo censoring), are tasked with going out and saving the world by defeating monsters and rescuing people. In other words, it's a video game.

There are interesting dungeons and weird sound effects and lots of enemies with old-school behaviour patterns straight outta Zelda. You get to equip a sword and use items and fight through some surprisingly creative dungeons, like the inside of a painting, and a toy chest. The sound effects are hilariously awful — there's this weird voice echo when you get damaged that makes it sound like you're being sucked into a hell vortex — and there's a lot of backtracking, but in general, this is a Fun, Quirky Game. Nothing special. Just fun.

But there's one particularly interesting hook that has always made Soul Blazer stand out.

See, when we play video games, we're always looking for some sort of tug to keep going — a motivation, if you will. Sometimes that's the story, or the joy of discovery. For some of us it's about challenging our brains to accomplish things we don't normally accomplish, or just racking up achievements so we can brag online about our GamerScores.

Soul Blazer's "tug" is unlike any other game's.

The basic concept is that a big ol' monster named Deathtoll has sealed away all of the world's population — which includes people, animals, and talking inanimate objects — in "monster lairs" that populate every dungeon you visit in Soul Blazer. Every time you take out a monster lair, there's a chance you'll rescue one of those people, animals, or objects, some of whom will reward you with items or funny bits of dialogue.

So as you power through the game, you're also rescuing people, and there's something really enigmatic and alluring about the act of stepping on one of those monster lairs and not knowing what you're gonna get. Since each of the game's six main areas starts off as a big ol' blank canvas, rescuing each territory's population feels kinda like solving a puzzle. What sort of people are you going to discover? What kind of buildings are you going to reconstruct? What are you gonna get out of it?

It's a neat little gimmick that we haven't seen in any games since Soul Blazer, and I'd recommend checking the game out just for that. Playing god is fun, but playing god's servant has some nice benefits too.

What about you guys? Did you revisit Soul Blazer this week? What did you think?