How A Successful Kickstarter Lost Half A Million Dollars 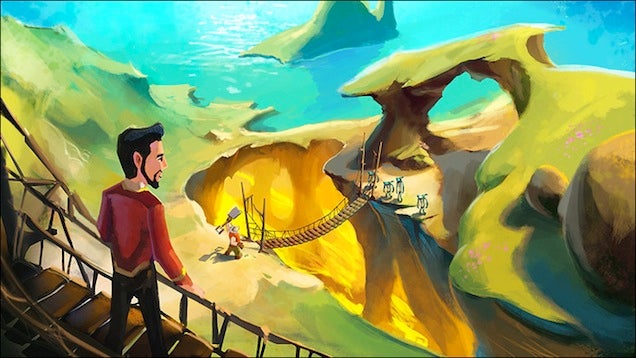 The world of crowdfunding is full of projects that never quite deliver what they have promised, but how often does a half-million-dollar Kickstarter simply disappear?

Yogventures, an ambitious video game project helmed by a group of YouTubers called The Yogscast, raised over $US567,000 back in 2012 to make what they called "the game you've always wanted".

Last week, the developers of Yogventures announced that they had cancelled the game, and that backers would not be getting refunds. So what happened? Where did the money go? Let's break it down.

Just what is a Yogscast?

The Yogscast is a group of popular personalities that regularly make videos on YouTube about games like Minecraft and World of Warcraft. They have got a ton of fans — 7sevenmillion subscribers on YouTube alone — and over the years they have evolved into a genuine corporation, with their own forums, store, and podcast that many find funny and entertaining.

But even before this failed Kickstarter, not all has been rosy. Just a couple of weeks ago, Yogscast ran into some controversy when they announced a revenue-sharing program in which their personalities would make videos about games like Space Engineers in exchange for a percentage of revenue from the game. Many saw this as a serious conflict of interest.

Yep — fans dug Yogscast enough to dish out $US567,665 when they launched a Kickstarter for their "open world sandbox game" back in April of 2012. Over 13,000 people donated to the project in hopes of making Yogventures a reality.

So The Yogscast is also a game developer?

Nope! As they wrote on the Kickstarter page:

Lewis and Simon can barely manage a simple jumping puzzle - so the Yogscast aren't going to be doing any actual coding! We aren't programmers or artists but luckily we have close friends at Winterkewl Games who are. They are a team of talented indie developers based in and around Hollywood, California. Their artists and programmers are long-time veterans of film and game companies - working at the highest levels of production.

Really. This was their first game.

There were a lot of red flags with this one. For starters, the promises they made were way too ambitious: randomly-generated game worlds, a crafting system, an in-game physics engine, customisable characters, and so forth. "Since we'll be helping to develop the game we'll be able to ask YOU the players what features you want and actually have them created," they wrote. "This game will be the ultimate mod where anything we can dream we can build!"

I'm guessing they didn't make that.

Right! In March of 2013, the developers announced that they'd entered alpha, and by August of that year, they were already talking about serious financial issues:

Unfortunately, that ate the majority of our budget while we worked in R&D so ever since December 2012 we have had to fund the development of Yogventures! ourselves. "What does that mean?" I can hear you ask. Well it means the team initially all took time off of our "day jobs" to dedicate to Yogventures, it turns out it was no where near enough time and we had to all go back to those day jobs and continue development on nights and weekends and lunch breaks and pretty much anywhere we can fit in a few hours to tackle the enormous amount of work needed. I'm proud of the team for sticking by the project despite our initial set backs and delays. It's a testament to how much we all believe in this game and how much we really want to do a good job for all of you that helped Kickstart this company and get us off the ground and running! Hopefully in the near future, we will be able to expand even more and put even more time and effort into making Yogventures! what we all know it really can be, which is great fun!

Did they keep working on the game after that?

Yep. On August 28, 2013, Yogventures entered open beta for Kickstarter backers. If you weren't a backer, you could pay $US30 for access. Over the next few months, fans played the beta and sent feedback to the developers, and the vibe seemed generally good. Sure, the project was delayed, but at least there was a game there.

Then, in early 2014, Winterkewl went silent. They stopped updating the game, and fans started posting on the forums asking what had happened, and why it seemed like there was no progress.

The beginning of the end.

Yeah. In early July, Winterkewl founder Kris Vale announced that he had shut down the company and turned over all development work back to Yogscast. He said that he had invested $US25,000 of his own money into the game, and that the work had cost him his marriage:

I tried to cut all costs and continue the development even after the heavy losses of 2013 but the stress of trying to work full time and be full time on the game ultimately caused me to ruin my relationship with my wife, and she filed for divorce because I was so obsessed with finishing this game that she couldn't take not seeing me anymore. When the divorce began I suffered a bit of a crisis personally and had to take a medical leave of absence from work. I almost lost my job too.

I'm deeply sorry that despite our best efforts we never reached a level of play-ability that inspired enough confidence from not only the community but even the Yogscast themselves. This is my fault, I agreed to every feature request we got because I didn't want to lose the opportunity. I wanted so badly to make this project a reality I ignored the real-world risks to the point that I almost lost everything and worst of all I let you all down.

Yep. A couple of weeks later, Yogscast sent a letter to their backers saying the game had been cancelled. "Although we're under no obligation to do anything," they wrote, "instead we're going to do our best to make this right, and make you really glad that you backed the project!"

Though backers would no longer receive copies of the game as part of the Kickstarter's rewards — there was no game to give! — Yogscast promised to instead send out codes for a game called TUG, which was made by some of their friends.

(You can read the full letter from Yogscast to backers here.)

Were they really under "no obligation" to do anything?

Is a creator legally obligated to fulfil the promises of their project?

Yes. Kickstarter's Terms of Use require creators to fulfil all rewards of their project or refund any backer whose reward they do not or cannot fulfil. (This is what creators see before they launch.) This information can serve as a basis for legal recourse if a creator doesn't fulfil their promises. We hope that backers will consider using this provision only in cases where they feel that a creator has not made a good faith effort to complete the project and fulfil.

Fans who have asked for refunds have been told by Winterkewl that they have spent all the money on development and won't be able to give anyone their pledges back, even though they couldn't deliver on any of those rewards.

Wait a minute. What happened all of that Kickstarter money?

Great question! The most recent update on Yogventure's Kickstarter has a full breakdown of how Winterkewl claims the money was divvied up once Amazon and Kickstarter had taken their fees:

That was the plan, they say. But then, Winterkewl's Kris Vale says, one of their artists quit after two weeks to join LucasArts — keeping the $US35,000 lump sum they'd paid him — and his new contract prevented him from working on the Yogventures project.

Yogscast's Lewis Brindley was upset, wrote Vale, and asked for Winterkewl to send them all of the Kickstarter money they hadn't already spent.

"In the end we negotiated that $US150,000 would be transferred to the Yogscast with the understanding that they would use that money exclusively to create and ship all the physical rewards, AND they would help hire the main programmer that we still didn't have on the project," Vale wrote.

Another great question! Yogscast isn't saying. On Saturday, Brindley addressed Vale's most recent update with a post on Reddit that seemed to handwave Winterkewl's claims:

We're not ready to make a detailed statement about what happened with Yogventures. Winterkewl's statement omits much and I would disagree with a number of points, but there's no value in going into detail. Our only goal right now is to ensure that we provide the best possible experience for the backers that we can. I can honestly say this has been our goal throughout.

To keep things simple, the facts are:

I would just like to say that this project was started when The Yogscast was just me and Simon making videos out of our bedrooms. We met Kris and trusted his qualifications and assertions that we could trust him with our brand and even more importantly, our audience. Needless to say, I'm upset and embarrassed, but strongly believe the backers will end up getting far more value and a far better result than they originally anticipated when they backed this project.

Wow, this is really ugly.

Yep. There's lots of finger-pointing going on here, and more importantly, there are over 13,000 people who aren't getting the rewards they were promised when they gave their money to this project. The story could get even uglier if one of those Kickstarter backers decides to try to pursue legal action.

For now? Let this be yet another cautionary tale: be careful what you Kickstart.

Leah Williams 20 Jan 2020 4:00 PM
The next generation of gaming consoles launches at the end of this year with the Xbox Series X and PS5. In a sea of leaks and rumours, here's what we know so far about the next gen Xbox.