If you have even a passing relationship with video games, you've probably picked up a gun controller. It's a gimmick, sure, but it's a great one. And thanks to the Oculus Rift and Trinity VR's Magnum, it's about to get even cooler.

Much like your old Nintendo Zapper or your Sega Saturn Stunner (you dweeb), Trinity VR's Magnum is just a gun-shaped controller you play video games with. It has a trigger, but also some buttons, and a couple of out-of-the way joysticks. And in that way it's instantly familiar as a "light gun". The difference is that until now you've always pointed your plastic guns at a screen.

Early light guns used an ingenious system of inserting frames of pure black (with white spots for targets) to tell a photoreceptor in toy-gun barrel if it was aiming in the right place. More modern (and generally waaaaay lamer) solutions like the Wii use motion controls to let you drag crosshairs across a screen like a glorified mouse. The Magnum doesn't have to rely on either of those solutions though, because it doesn't need to point at a screen. Instead, it uses a camera to keep track of where it's pointing in relation to where your eyes are pointing. The effect is awesome.

The first demo I got to try was a simple target range. I was a nameless, faceless, armless videogameman standing by myself in a field inexplicably littered with explosive barrels. So I started firing a gun at them, as one does.

The most immediately awesome thing about using the Magnum is that you're not holding it in front of a screen, you're holding it what feels like through the screen. It's like reaching right into the game with your toy plastic gun instead of having to interact through a window. It's nuts how natural it feels.

Trinity VR's demo was stripped down, so the gun just floated there, which took away from the effect a little; this demo isn't quite as immersive as Project Morpheus's Move-powered demos. But with well-modelled arms and fingers, it's easy to see how this could be incredibly convincing. 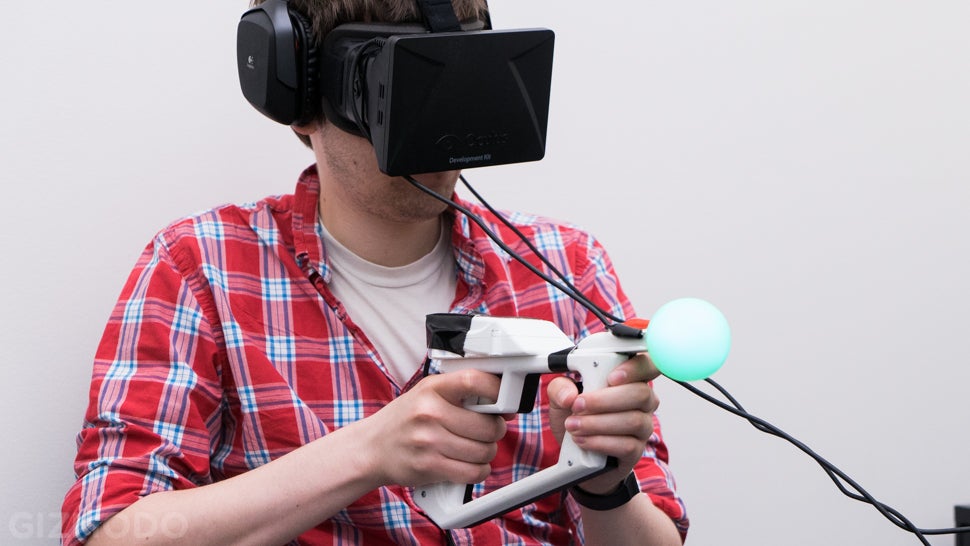 The only thing missing is more wires.

But maybe what's craziest is how hard it is to really appreciate what actually holding a virtual gun means for gameplay. I'm so bound to the tropes of traditional shooters (where your crosshair is always the center of the screen) that at first, I just looked down the virtual sights, pivoting around in my chair as though my gun and my line of sight were duct taped together.

But then I realised I could shoot at anything I could see. Also stuff I couldn't see. I started looking one way and shooting the other, waving my firing hand wildly until I heard a tell-tale boom from that direction. And though neither was an option in this demo, it's easy to see how you could use this to shoot down into trenches, or blindfire when ducked behind cover. This new freedom was a delight to discover, like being a baby and realising the world is actually more than just what you can see at any given time.

By the time I got to the second demo — a psychedelic shooter where you shoot at stuff while also piloting some sort of spaceship with the Magnum's control stick — I was feeling pretty at home.

As you can see from the gun I was using, Trinity VR's Magnum is in very early stages. What I got to try was the first functional prototype. The road to a finished product will be paved — take a wild guess — by Kickstarter, and the project just launched today.

By the time it's done, Trinity VR is aiming not only to have a slicker-looking finished product, but also a pretty low price point as well. Under $US100, maybe lower. And it damn well better. While the Magnum is definitely awesome and potentially revolutionary, it's not exactly a unique idea. Motion-tracking style guns are not new, and Hey we should do this with VR! is a pretty obvious application. Trinity VR's main challenge is going to be becoming the first, the best, and the most ubiquitous.

It's off to a good start. The Magnum will work with any old webcam you have lying around, which helps keep down the cost. And with a projected release date of "right alongside the consumer version of the Oculus Rift," Trinity VR is on the inside track to be coming the Oculus gun if enough devs get on board.

The biggest potential holdup, though? There are also rumours that Oculus VR might be working on its own motion controllers, and if one of them is a gun it could seriously submarine the Magnum's chances of being a must-have for the system. It would be wise to hold onto your dollars for now.

Regardless of whoever winds up making the gun for the Oculus Rift, this motion-based gun tech is already awesome in its infancy, and it will only get better with bigger budgets, better hardware, and more clever minds devoted to putting both to work. I haven't been this excited about stupid plastic guns since I took down my first Duck Hunt mallard.