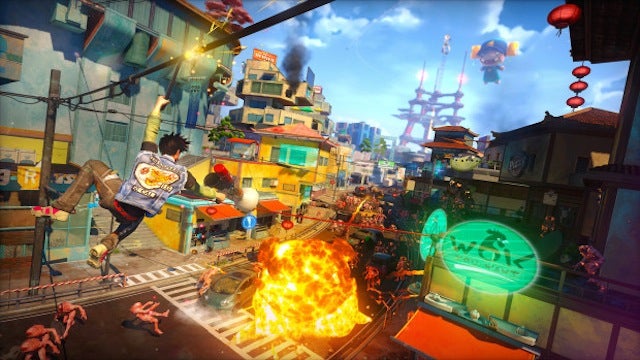 Back in the day Insomniac was top tier PlayStation. The Ratchet & Clank series ruled (unless you preferred Jak & Daxter, in which case: arguments) and it had nailed a perfect mix of run and gun controls and 'what the hell did I just shoot' weapons. Why any of it was happening didn't matter, only that felt great doing it.

Having played Sunset Overdrive, it feels exactly the same.

The speed of movement and weird-arse guns feel exactly like the glory days of Insomniac's old blasters. Everything it does seems to be about sneaking in 'old' gaming mechanics and hoping no one notices - bouncy jumping that's exactly how physics doesn't work, crowds of enemies that exists only to be shot. Even the grinding mechanic that lets you zoom along wires and edges feels like a direct lift from Ratchet games. Stick ears on the hero and he might as well be a tall Lombax.

And it works. The overriding design goal seems to be 'is it fun'? I don't know why certain objects like cars act as trampolines, or why I have a gun that fires records, or exploding teddy bears, or fireworks - it's just a rewarding explosion of stuff going off all over the screen.

It makes me wonder if the studio sat down at some point and tried to work out what made its older games fun and how to modernise it. The Resistance series and Fuse seemed like a company feeling obliged to try and grow up. With the exception of Resistance 3* those games felt dutifully built rather than enjoyably made. Sunset overdrive on the other hand feels a lot like Insomniac realised its old stuff was fun because it was fun to make. It's puerile in places and some of the presentation's abrasively 'cool, yo', but the gameplay's sound.

The final level of the E3 demo for example involves grinding around a looping roller coaster track, hopping from rail to rail shooting enemies and avoiding oncoming cars. It doesn't make any sense if you stop to think about it (where do all the cars keep spawning from?) but mechanically it's just so rewarding: jump, shoot, hop to another rail, repeat. The whole thing seems like a game aware of its best bits and prepared build things around them.

Oddly another old thing it reminds me of is Tony Hawk's Pro Skater. It's as much about the performance and final score as it is finishing a level. At some points I wanted to restart sections simply because I thought I could have made it look better. It's not a hard game but it's the kind of thing you want to finesse, not finish.

I don't know yet whether that's enough to last a whole game but I could have happily replayed the demo several times over just to perfect imaginary runs I felt I could see in level layouts. That's always a good sign.

*Resistance 3 really was great and it's a shame that 1 & 2's averageness meant a lot of people overlooked it or thought it was more of the same.