Inside The World Of GTA Online's Intense Biker Gangs 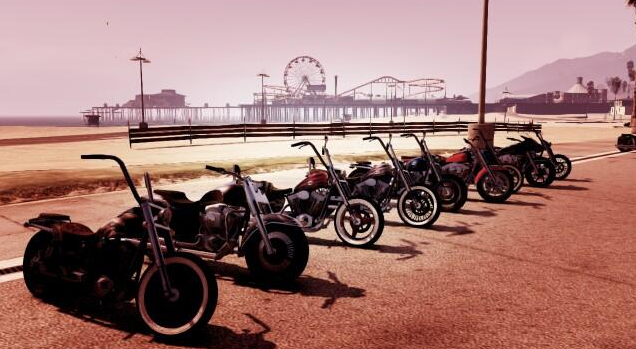 Of course people playing GTA Online have formed digital gangs — the "crews" feature, which allows everyone to assign special roles and ranks within a group, is practically built for this. But damn, some people take crews in GTA Online really seriously.

Take the Reaper Lords, for example. They are a biker gang that only exists inside of Los Santos, and they lay claim to turf on the northern part of the GTA Online map. Founded by xXLordKingGodXx, the gang is also expanding into smaller chapters across different consoles, Xbox and PlayStation alike. According to the documentary-style video embedded above, a few hundred members are currently a part of the Reaper Lords.

So what makes a Reaper Lord a Reaper Lord? For one, they have a dress code: they all wear black leather jacket with a special "Reaper Lords" patch on the back. According to Gamer's Diary, they even have a motto: "Reaper Lords until the reaper calls."

They also have a strict guide of conduct, depending on what type of member you are. The gang has actually outlined specific rules for prospects and hangarounds:

1. ONLY SPEAK WHEN A PATCHED MEMBER SPEAKS TO YOU.

2. YOU WILL UPDATE AND REPORT TO YOUR RANKING OFFICERS REGULARLY.

3. OBEY ALL ORDERS GIVEN TO YOU.

5. YOU WILL RIDE IN THE BACK OF THE FORMATION ON GROUP RIDES.

6. WEAR A BROWN SUEDE JACKET WITH THE PROSPECT PATCH ON THE BACK, AND A BLACK T-SHIRT.

7. SALUTE IMMEDIATELY WHEN YOU SEE A PATCHED MEMBER.

8. YOU RIDE ONLY THE HEXER, OR THE BAGGER.

9. YOU NEVER USE PASSIVE MODE, TANKS, OR JETS.

11. YOU DO NOT WEAR THE SKULL HELMET.

12. DO NOT IGNORE INVITES OR MEETINGS THAT ARE BEING HELD.

Once prospects have been tested and proved worthy, they become actual Reaper Lords — and this, too, comes with its own set of intense rules:

1. LISTEN TO YOUR LEADERS.

2. WEAR "BLACK LEATHER JACKET" WITH REAPER LORDS PATCH ON THE BACK.

4. RIDE ON MOTORCYCLES ONLY, WHEN WITH THE CREW.

5. DO NOT IGNORE INVITES OR MEETINGS THAT ARE BEING HELD.

6. SALUTE IMMEDIATELY WHEN YOU SEE A HIGHER RANKING MEMBER.

7. HELP ALL BROTHERS IN NEED.

Once inside the gang, players participate in missions and meetings, depending on their role within the organisation. But more interestingly, they have also constructed a fascinating role-playing game complete with rivals, allies, and even mock news reports and Twitter updates that track their activity. It's very reminiscent of the way real criminal groups use social media for PR purposes, only GTA Online players have more flexibility when it comes to staging what they show the world:

Some fool ran his mouth… We cut his hands off and left him for dead. #PatchPic #GTAOnline pic.twitter.com/gx38vDKotX

No one survives when they go against us. #ReaperLordsMC #GTAOnline pic.twitter.com/32PHXqeulT

Not that that stops their rivals from talking shit on the comments sections: 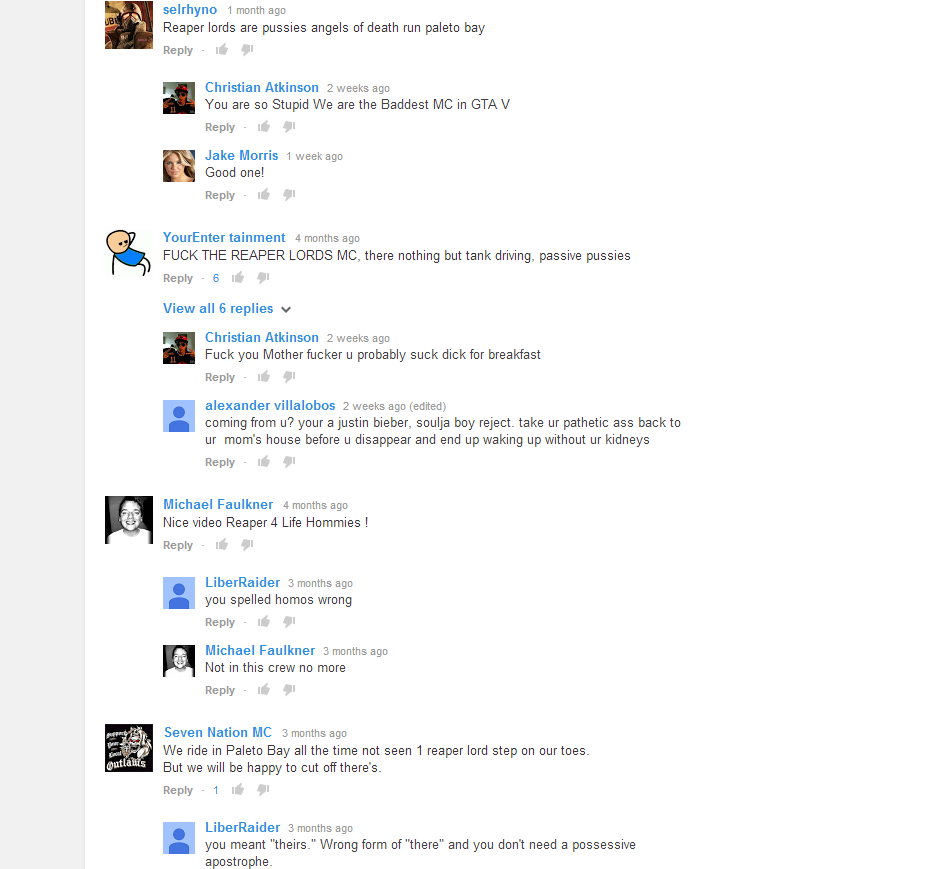 Kind of surreal, no? It's hard to tell how much of this is real and how much of it is staged, carefully curated to give off a specific look online. Maybe that doesn't matter as much as the fact that people are putting this much effort into making GTA Online gangs seem "real."

All of this comes together to paint a fascinating, if not unsettling (a lot of these folks kind of sound like kids) picture of the sorts of communities that populate GTA Online.

You can read more about the Reaper Lords here, and you can visit their official website here.