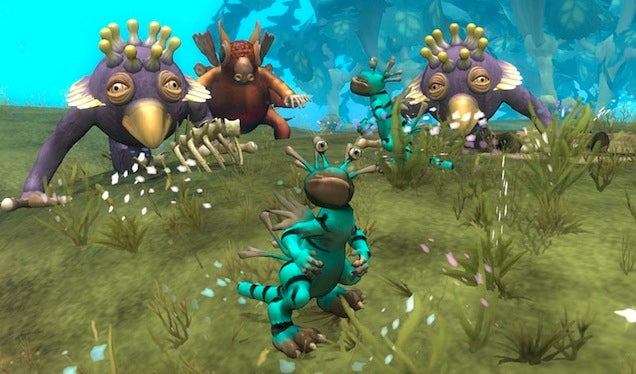 Do you remember 2006? The president of the United States was George W. Bush, a website called Twitter was about to launch for the first time, and in the video game world, everyone was excited for a revolutionary project called Spore.

Now that The New Yorker has opened up its archives — which are full of great stories about all sorts of subjects — we can go back in time and read about some fascinating moments in video game history. This 2006 profile of Will Wright, for example, takes a deep dive into the life of the guy who made SimCity. At the time, Wright was working on what some thought could be as innovative and Paradigm-Shattering as his other Sim games.

For the past six years, Wright has been working on a new game, which will be released in 2007. It is anticipated with something like the interest with which writers in Paris in the early twenties awaited Joyce's "Ulysses." At first, Wright called the project Sim Everything, but a few years ago he settled on the name Spore. The game draws on the theory of natural selection. It seeks to replicate algorithmically the conditions by which evolution works, and render the process as a game. Conceptually, Spore is radical: at a time when most game makers are offering ever more dazzling graphics and scenarios and stories, Wright and his backer, Electronic Arts, are betting that players want to create the environments and stories themselves — that what players really like about games is exploring what Wright calls "possibility space." "Will has a reality-distortion field around him," his former business partner, Jeff Braun, told me. "He comes up with the craziest idea you've ever heard, and when he's finished explaining it to you the world looks crazy — he's the only sane person in it."

Of course, Spore wouldn't wind up revolutionizing all that much — when it finally came out in 2008, Wright's ambitious game was met with tepid reactions. "People who are more interested in playing Spore than in playing with Spore — that is, people who are more interested in a game than a toy — are likely to come away feeling a bit let down," wrote Seth Schiesel of The New York Times.

Which makes this Wright profile even more fascinating. I mean, check out this paragraph — again, written in 2006 — and tell me it couldn't have been published this morning:

But there are reasons to believe that E.A.'s problems are more systemic — indeed, that the entire game industry is on the verge of a fundamental restructuring. Not since the early nineteen-eighties, when video games began moving from amusement arcades into homes, has the future seemed so uncertain. While each generation of hardware offers the capacity for increasingly realistic graphics — like Tiger's smile — it also requires producers to devote more programming hours to filling that capacity. Twenty years ago, it was possible for one man to create an entire video game; today, development teams of a hundred or more are the norm. Moreover, E.A.'s basic product, which is a boxed game costing around fifty dollars, isn't as appealing as it once was. Many adult players prefer "casual games," which can be played on cell phones and in shorter sessions online. Instead of buying games at a store and bringing them home, customers want games they can get on the Web. Just as some in the film industry have begun to wonder about the economic feasibility of films that cost upward of fifty million dollars to produce, so people in the game industry wonder whether big-budget games can survive in a climate that favours downloadable games that are cheap, short-lived, and disposable.

Check out the whole Wright profile. It's a great read, even if it does suddenly switch to all-italics halfway through. Also recommended from the New Yorker's archives: Nick Paumgarten's deep dive into the life and times of Mario creator Shigeru Miyamoto.