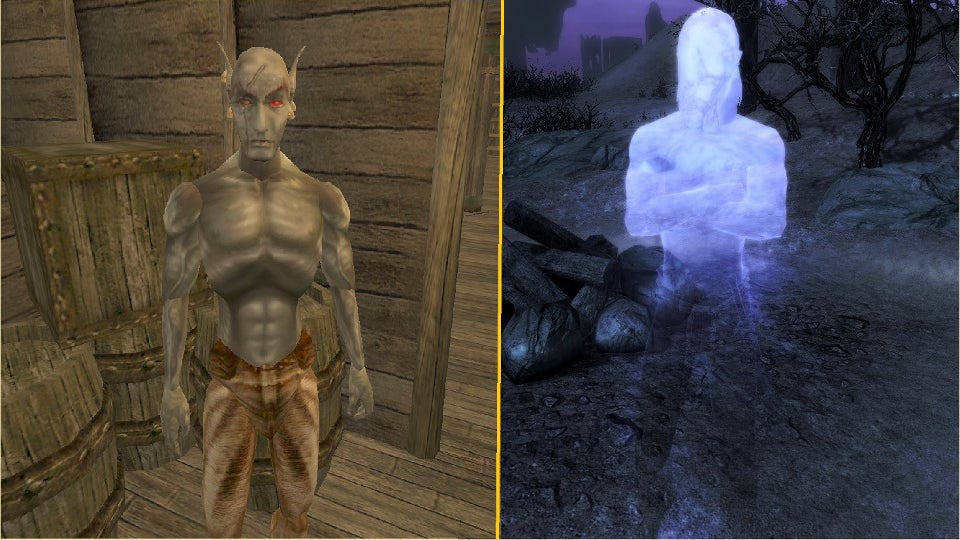 An Imgur user has put together an exhaustive list of recurring characters in Elder Scrolls games — from Arena all the way up through Skyrim and The Elder Scrolls Online. Is your favourite character on it? Probably. Did they suffer some kind of cruel, shocking fate between games? Yeaaaaah... probably again.

The full list is kind of incredible — given how enormous Elder Scrolls worlds are and how many characters populate them — that anybody's keeping such close tabs on them, but here we are. On the Internet. Where people obsess over needlepoint-fine details like their lives depend on it. Consider my previous point rescinded.

I'm even more impressed by Bethesda's dedication to keeping certain characters' stories alive, especially given that Elder Scrolls games often take place in wildly different parts of the series' world — not to mention different timeframes — and are developed over the course of many years at a time. 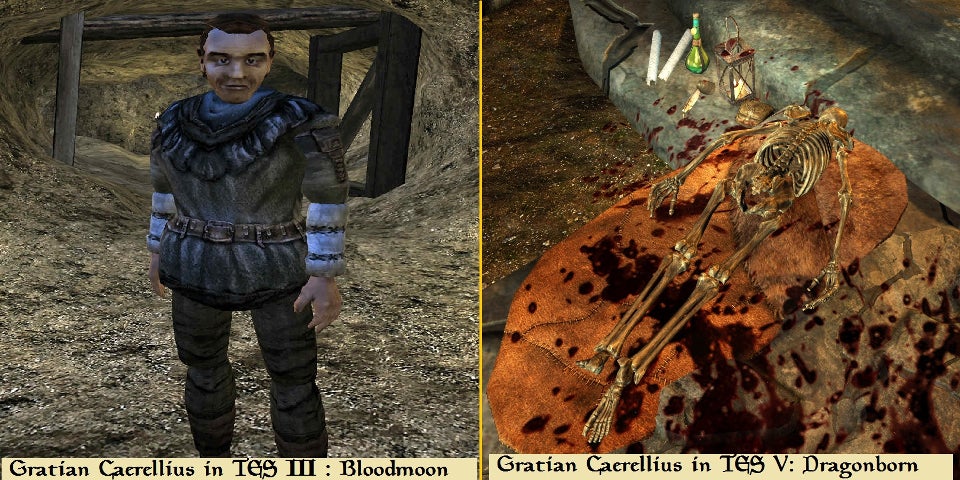 That means these characters change a lot between games. Some, like evil undead horse Shadowmere, change sexes, while many (lots of quest givers, some bosses) change into piles of bones after trying to follow their dreams. It's a recurring theme, actually: so-and-so wishes to do this thing they're really passionate about/slay a whole bunch of sabertooth troll apes, but instead they die in the process/are slain by a whole bunch of sabertooth troll apes. Take that, Game of Thrones.

Such characters include Falx Carius, a valiant knight from Morrowind who comes back as a confused (and evil) not-quite-zombie in Skyrim expansion Dragonborn, a Dark Brotherhood member named Lucien who appears as an assassin in Oblivion and then — two centuries later — as a spectral ally you can summon in Skyrim, and Jiub, one of the first characters you meet in Morrowind who you can find — and this is some seriously sad stuff — as a lost soul in Dragonborn, "softly searching the dispersed pages of his autobiography."

Oh, there's also Svenja Snow-Song from Morrowind expansion Bloodmoon. She's the one with the sabertooth troll apes. You know how it goes: could've lived out a peaceful post-saber-ape-attack life with her husband, decides to go on a vengeful safari instead, ends up decorating her sworn foe's den as a corpse. That's where you find her in Oblivion.

Some of my absolute favourites, however, have persisted for almost the entire series. For example:

"M'aiq the Liar is so recurrent that he became a running gag. Kind of an easter egg with the gift of speech, he enjoys, since Morrowind, gratifying the player with information that is never quite true but never totally false either. His cup of tea: to make references to features that developers had to give up, while applying to tear down the fourth wall like a sort of medieval Deadpool. He is obviously back in Oblivion. In Skyrim, however, he says to be the descendant of the Khajiit encountered in previous episodes. But should we believe a liar? And is the M'aiq the Liar from ESO the ancestor of those other M'aiq?" 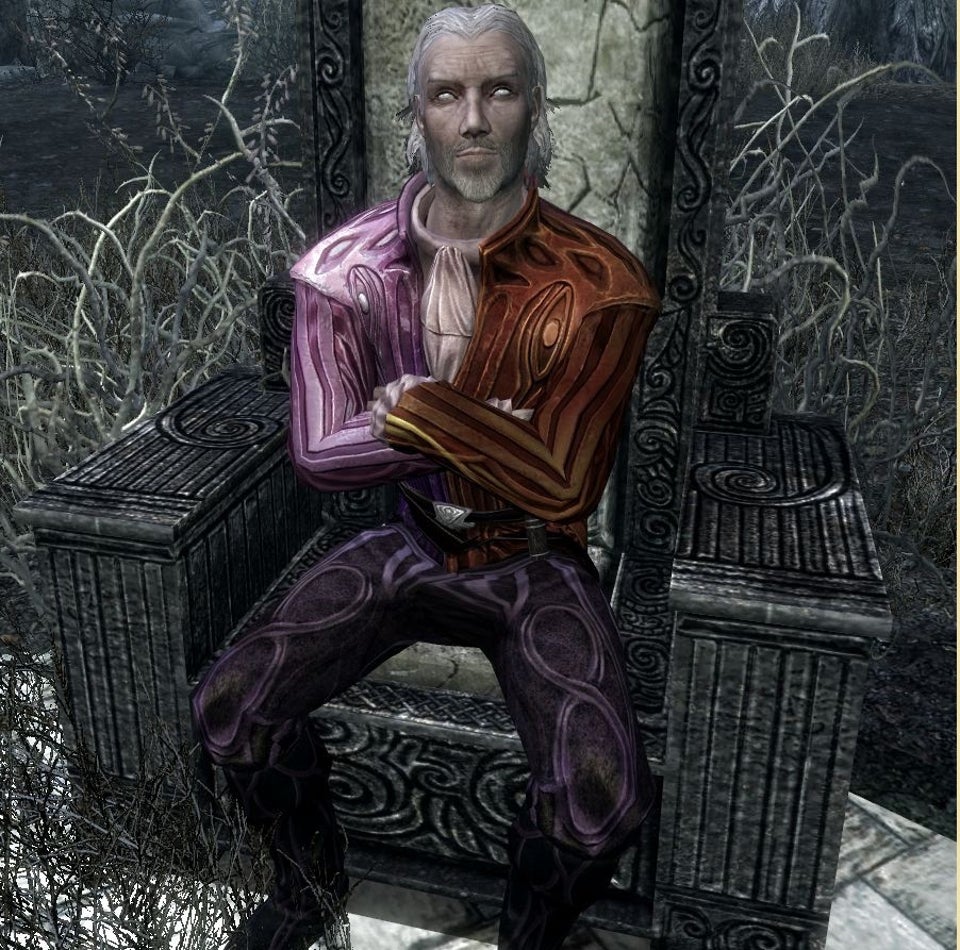 "Less crazy than Sheogorath, less wicked than Mehrunes Dagon and less concerned with the fate of the world than Azura, Clavicus Vile is a Daedra Prince and even the recurring character who can boast to appear most often in the series. Him, or more accurately his companion, Barbas, an independent incarnation of half his power."

"Clavicus Vile and Barbas (in his dog form) can be summoned in Daggerfall, and also make a noticeable appearance in the spin-off Redguard. Clavicus Vile is then more discreet (even if he continues to give missions to the heroes who pray for him), but Barbas is back in a solo appearance in Morrowind, in the form of a melomaniac scamp merchant. In Oblivion, he advises the player in the form of a statuette. In Skyrim, he is finally back in his canine form, and ask the player to help him reconcile with Clavicus Vile (which will be very sensitive to this fine effort). And he appears one more time in his dog form in The Elder Scrolls Online."

"This is the most unexpected recurring character, and yet he exists. Because yes, since our hero relinquishes his throne to Sheogorath at the end of Shivering Isles, this would be the ancient player character in person you meet in Skyrim, as the Prince of Madness! An appearance that goes against the unwritten rule of the Elder Scrolls which, until now, made their heroes systematically disappear into oblivion once their quest is completed."

Pretty interesting, right? Who are your favourite Elder Scrolls characters? And did they die horribly, live forever, or something in the middle (e.g. live free, die hard, etc)?

Again, props to Imgur user St41n3dCl4ss on all the legwork. This really is quite a thing.