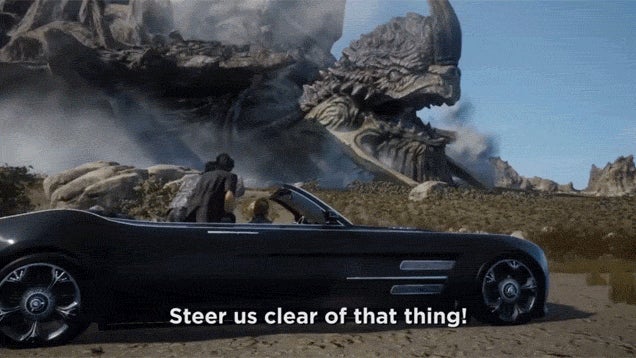 Final Fantasy XV is actually a video game that is actually happening, and new footage released by Square Enix last night shows that it's looking damn good too.

The one big question — other than "why is the steering wheel on the right?" — is "just how does that combat work?"

We don't have the answers to that question yet, but at least we a good starting point. With the assistance of our Hungarian gif-master Gergo Vas, let's take a closer look at the combat in Final Fantasy XV's most recent trailer — and compare it to the combat we saw at E3 2013 — in an attempt to figure out just what's going on here.

So here's a closer look at what appears to be the core of FFXV's combat: hacking, slashing, and dodging.

Looks fun, right? Seems like the player is only in control of the main character, Noctis, with your other party members doing their own thing alongside you. Some speculation: could we perhaps see some sort of variation on the Gambit system from Final Fantasy XII, where you could give your party members rudimentary AI programming to control how they reacted to certain acts and conditions?

It also looks a lot like Kingdom Hearts or even FFXII: Lightning Returns, where your buttons directly translate to on-screen moves without menus getting in their way. In other words, it's an action-RPG, which will undoubtedly piss off at least a few hardcore Final Fantasy fans who miss the turn-based battles of old. Importantly, and thankfully, damage stats pop up when you get hits off, which will make a big difference for those of us who just love seeing numbers.

Last night's battles are far less flashy than the combat we saw during E3 2013, which involved special moves and much bigger baddies:

Looks like dodging will still be an integral part of the game, though, as will Noctis's warping/blinking ability, which was also shown off during last night's trailer.

Here's another look back at some FFXV gameplay from E3 2013, again with a far bigger bad guy:

OK. Back to the present.

In this shot from last night's trailer, we see a really interesting moment, something that I've never seen in an action-RPG before — one of Noctis's party members actually jumps to the hero's aid, leaping over him to take out a nearby baddie while Noctis is dodging.

Very neat. It's unclear whether this is an automatic feature or something you'll be able to trigger manually, but it seems to add a level of teamwork that we haven't seen in a Final Fantasy game before. (Consider this the "next-gen" version of the Cover ability used by Cecil the Paladin and other FF characters over the past few decades.)

Here's another, similar version of that same ability:

This is really interesting. One of Noctis's party members actually grabs onto him and moves him away, while the other one delivers a deathblow to take down a marauding elephant beast.

As you can see on the bottom right, Noctis has pretty low health here, which makes this seem like a conditional event, reminiscent of desperation moves from Final Fantasy VI. Maybe FFXV will only let you call party members for help when your HP is in the red; maybe you can only do it a limited number of times; maybe it happens automatically whether or not you want help. The inner workings aren't super clear. But "teamwork" seems to be a big theme in this bromantic road trip of a video game, so it's safe to say this will be a fundamental part of combat.

It all looks pretty impressive, don't you think? FFXV looks like nothing I've seen before, either in Final Fantasy or in any other video game, and that element of surprise may wind up being the game's biggest strength.http://kotaku.com/the-final-fant...

And now I leave you with a bunch of sweet GIFs from 2013, showcasing wall-jumping, cover, gigantic weapons, crystal barriers, and all sorts of other things we may or may not see when Final Fantasy XV finally comes out: