The Vanishing Of Ethan Carter: The Kotaku Review

Ethan Carter is a game about stories. It’s a disarmingly personal tale, a murder mystery about childhood alienation that resonated with me in unexpected ways. And yes, it was created by a guy who is best known for making an incredibly violent first-person shooter called “Bulletstorm“.

I remember when I was little, I didn’t really fit in with that many other kids. I don’t recall exactly when I started doing it, but I became obsessed with crafting these life-sized (well, at least by a seven-or-eight-year-old’s standards) paper cut-outs of characters from, er, Warcraft. Warcraft II, to be precise. I lugged, like, 15 of them around with me everywhere I went, in a giant garbage sack. They were my friends, and in retrospect I’m pretty sure everybody else thought I was crazy.

I think I might have been Ethan Carter, a boy who — wait for it — is obsessed with creating strange things even though everybody around him, family included, thinks he’s crazy.

The Vanishing Of Ethan Carter begins with something of a disclaimer: “This game is a narrative experience that does not hold your hand.”

The game’s creators were not lying. I quickly picked up a bloody breadcrumb trail of clues that young Ethan Carter — main character in the same way Princess Zelda is the main character in Legend of Zelda — hadn’t just furiously scribbled a message to famed supernatural investigator (and character you play as) Paul Prospero for kicks. This countryside paradise was caught in the tendrils of something terrible.

Beyond that, though, it was up to me to piece together what was going on, and I could merrily skip past as many supernatural crime scenes as I wanted. Occasionally Paul would pipe up with a cryptic (though smartly written) grumble about life and Lovecraftian un-life, but I wasn’t confined to any specific route, any particular telling of the tale.

As a result, each new vignette felt organic, like I was sifting through a vast expanse of surface-level beauty and gut-wrenching rot — as opposed to, you know, a glorified video game level. All this even though, to be frank, I spent the first hour or so completely at a loss as to what was going on beyond, “Man, something bad sure did happen here.”

I finally hit a groove after solving my first investigation puzzle, which I did by examining each individual item in what was probably the scene of a murder. There was certainly enough blood dripping from every leaf, tombstone, and especially sharp blade of grass — that’s for sure.

Oh, did I mention I was in graveyard? Of course I was in a graveyard. Where better to do a murder?

When I examined certain objects, my character’s internal thought process appeared on screen, making observations, pondering what exactly happened here. “Blood? Whose blood? Crow’s blood? A sacrifice?” Physically turning my field of view until the words on screen coalesced from shaky and illegible into a single whole resulted in a supernatural vision, one of the game’s main investigative techniques. I could see the next item I needed, enshrouded in a ghostly aura. It was a pretty cool effect, but the ectoplasmic antics were only just getting started.

Once I’d gathered a handful of items from the graveyard and a nearby church, I was able to light up a crypt down below. In it was a body — a fresh body. It was the first sign that things weren’t just off in this tiny rural town. They were downright fucked up.

And then I used my supernatural vision powers on the body. Suddenly, ghosts were everywhere. Silent echoes of something sinister. Each was a tiny vignette of what’d led to this gruesome scene. It was my job to place them in order by assigning each a number, at which point the scene played out, still wreathed in pale, breathless blue.

The ensuing flashback was dark, upsetting — especially given how close some of the characters involved allegedly were. I’d discovered it, though. Me. That was pretty cool. Moreover, I was given jigsaw pieces of story about these people — the scene I watched unfold, a few brief notes littered around the area, etc — but the rest was mine to assemble. I was writing the story in my head as I played. Like I said, Ethan Carter is a game about stories, and it’s one where you play an active role in making one.

The supernatural world receded, and the real world came back into focus. The sun gleamed more brightly than ever. I was hooked. I needed to know more, to get to the bottom of this sleepy little town’s darkest mysteries.

I remember the moment The Vanishing Of Ethan Carter unravelled for me. The game becomes very demanding toward the end. Many of those puzzles I skipped in pursuit of plot threads that especially interested me? Yeah, well, they were required after all. Without spoiling too much, I’ll say there’s A Thing near the end that more or less maps out which events must be completed for the ending to actually trigger. Or at least, it tells you their vague locations.

Suddenly my organic story experience didn’t feel so organic. I could practically hear the cold, mechanical gears grinding as I plodded toward the next game-y goal. Already, I had backtracked from one side of the game world to the other, something that left my virtual legs throbbing, my real-life mind numb. But hey, I was nearly done, or so I thought.

Turns out, I hadn’t tracked down the correct side-story near the game’s beginning. There were a couple, and though the one I found while stumbling through a beautiful forest was the last thing I expected to see in this game (in a good way), I hadn’t sated the end-of-game checklist just right.

I had to hoof it all the way back to the other side of the map — basically to the game’s “final” area — only to find out I was still missing something. It was agonizing.

After all this time and effort, there I was in the mine trying to figure out what I’d missed. Then I absent-mindedly told the mine shaft’s moaning, groaning elevator to descend without me in it, and I just lost it. “NOOOOOOOO, FUCK YOUUUUUUUU,” I bellowed as it plunged into perfect darkness. I just wanted to ride it… somewhere instead of standing there, stewing in how bored and frustrated I’d become. I was so tired of waiting.

On top of that, this portion of the game kinda took a pickaxe to the skull of Ethan Carter‘s claims that it doesn’t hold your hand. No, this isn’t hand-holding in the traditional sense — making the game easier — but it’s a close relative. The segment assumes the player isn’t intelligent or observant enough to enjoy the story unless they witness certain scenes. So instead of holding my hand, the game’s creators grabbed me by the wrist and tugged until I ended up where they wanted. I was forced to wonder, is that really any better?

I remember when The Vanishing Of Ethan Carter really clicked with me, me personally.

I began to see a pattern forming throughout all the vignettes of ghastly horror mixed with callbacks to dysfunctional family life. Ethan liked telling stories, but his family didn’t like that about him. Time and again, they thought he was just making up more creepy, weird stuff. They never believed him, but when bad things happened, , they blamed him for them.

People create things for a lot of reasons. Whether stories, drawings, videos, video games, or whatever, we have ideas and feelings we just can’t keep inside. If they stay there, they will devour us. 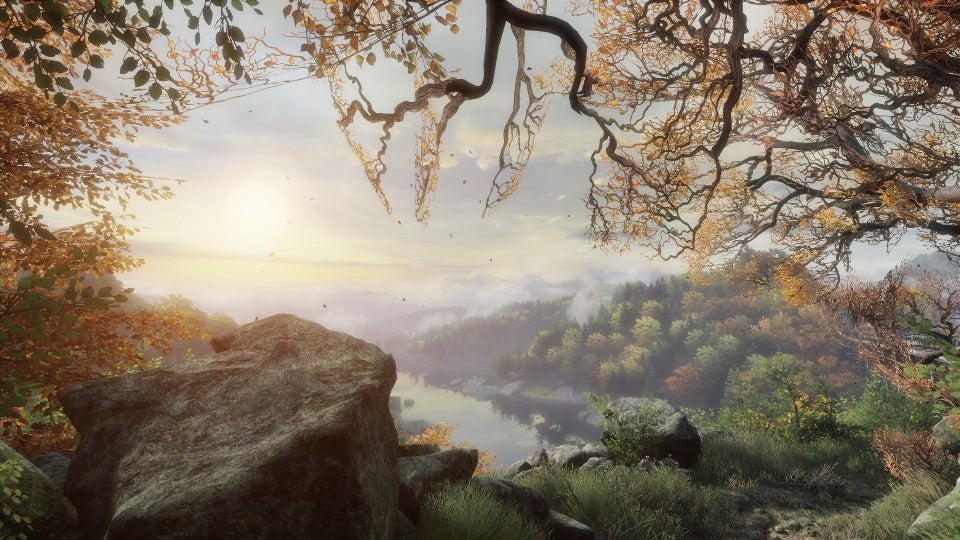 When I was little, I created to escape. I didn’t have many friends. I didn’t really like people. My parents were on the brink of getting divorced (spoiler: they did), but my tiny child brain couldn’t process that, didn’t understand quite what was happening. Or maybe it just didn’t want to.

So I made stuff. For hours. Those paper Warcraft figurines? I’d wake up at 4am — before school or church or any of that — to build them from scratch, to construct these grand stories about them.

I liked being up that early, too. Nobody else was around. I had nothing to be anxious about. I could live in my own little world, in the quiet of my own mind.

Escapism takes on many forms. I happen to be a big fan of it, as you might imagine. It helped me through some tough times. It’s probably why I write about video games, and I think it’s why I connected so strongly with Ethan’s character.

I remember when I realised just how solitary of a game The Vanishing Of Ethan Carter really is. I was walking through the mines — those damn mines — and, well… I died. . This was surprising because I didn’t know I could die in this game.

The mines, to be honest, were pretty tedious — whether I was solving their particular puzzles, of which there were a few, or just wading through them on another spat of backtracking. Coming to grips with that solitude, though, was key for my experience of the game. It gave method to the game’s madness.

There were a few times throughout The Vanishing Of Ethan Carter where I wondered, “Why am I only seeing flashbacks and reading about these events? Why am I not, you know, playing them?” This was especially true in moments when voice acting wasn’t super great or characters’ motivations didn’t entirely come through.

But Ethan Carter is not a typical game. It’s a story first and foremost, wrapped in an intriguing (though in places undercooked) game structure. Loneliness — the kind that claws inside your stomach, leaves you with way too much time to think — that loneliness accentuates that story, makes it sing. Heck, framed in that context, even the backtracking, while obnoxious, makes sense. There’s time to consider, ruminate, wonder, and learn.

My personal experience of Ethan Carter is inseparable from some of my own personal experiences. The game, by way of its story and structure, prompted them. Maybe your experience will be different. For the sake of particular portions of your early childhood, I sure hope it is.

I’m grateful that Vanishing Of Ethan Carter didn’t move at a million miles per hour or throw me into a stylish knife fight against the ghost of American family values or something. Its languid pace could feel excessive occasionally, but I think it’s actually good for the mind to wander a bit from time to time. To leave the here and the now. To go someplace else, even if that place is dark or uncomfortable.

I mean, that’s what video games are, right? A place to go. But eventually we have to come back down to Earth. My favourite games are the ones where I can bring something back with me.