far cry 4worst behavior
Facebook may have decided that you shouldn’t see the news, but we think you deserve to be in the know with Kotaku Australia’s reporting. To sign up for our daily newsletter covering the latest news, features and reviews, head HERE. For a running feed of all our stories, follow us on Twitter HERE. Or you can bookmark the Kotaku Australia homepage to visit whenever you need a news fix.

If I had to sum up gamers’ reaction to Far Cry 4 in a single sentence, it would have to be: “F**k these birds.” Or some variation of that, at least.

That’s one of the first things Kotaku’s Steve Marinconz said to me when we started playing online. I’d already played 30 hours of Far Cry 4 at that point, but Steve had only just begun. And he was quickly realising the exact same thing I did when I first stepped into Kyrat, the game’s mountainous Nepalese-ish setting: the birds in this game are absolutely f**king terrifying.

You spend almost all of your time in Far Cry 4 outside. No matter where you’re going, or what you’re doing, birds suddenly appear — seemingly out of nowhere — and try to eat your face. The first time it happens its shocking. And then it happens again. And again. It never stops, really.

Notice that he’s already complaining about the birds, and then another one drops in to remind him, yet again, f**k these birds.
https://twitter.com/jeffgerstmann/status/533324133199642624

What makes it even worse is that they don’t just go for your face either. Oh, if only they were so polite. They also swoop in to steal other animals that you’re hunting:

Hell, they might even circle back to try to drop the pig on you afterwards: 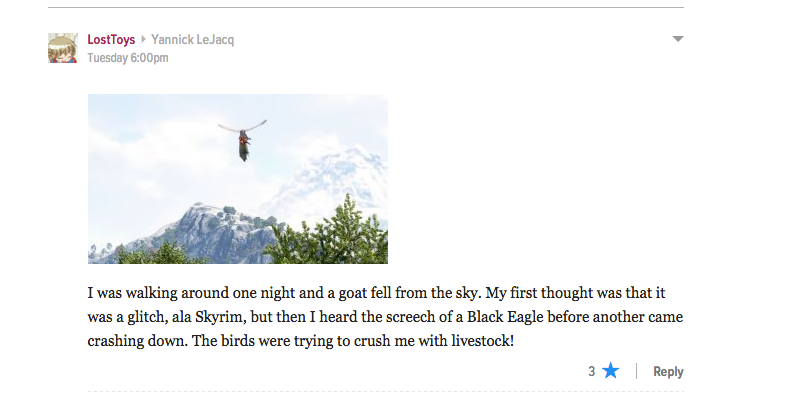 Have a good weekend, people of Kyrat. And remember to watch out for those birds.