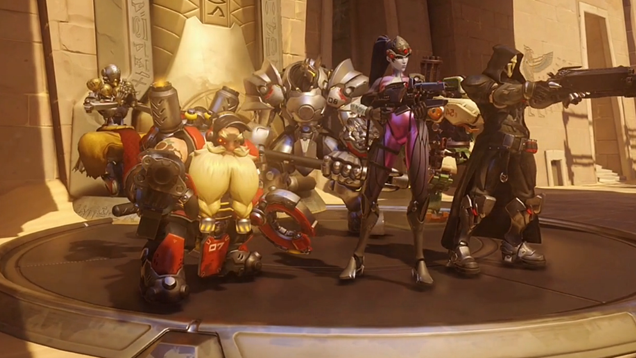 Because Overwatch isn’t a shooter with linear levels and set pieces. It isn’t a gaming experience developers can necessarily control. As a multi-player team-based shooter, it isn’t even an experience that yields even the slightest consistency across matches. Games like Call of Duty or Halo: at least they have a baseline ‘feel’ that can be communicated. Overwatch doesn’t even have that. Overwatch is chaos incarnate. Overwatch has — at the moment — 12 completely different characters who do 12 completely different things. Combine that with the team-based mechanics, combine that with the fact that you’re playing with a team of people who — like me — have little-to-no idea what they’re doing. Combine all those things? Playing Overwatch at Blizzcon hardly feels like the optimum way to ‘experience’ the game.

Earlier, at an Overwatch press conference, I was shown a pre-recorded multiplayer video Blizzard had prepared earlier, complete with commentary. It was a match featuring players who knew what the hell they were doing. They were working in tandem, they were making clever character choices, they were backing each other up, they were doing things that looked cool as shit. This, I thought to myself, is how people will be playing Overwatch roughly six months after release. This is going to be awesome.

In one match I played four people in my six man team decided to choose Winston (the gorilla with glasses) at the exact same time. That was less awesome.

Again, point being — chucking 12 random strangers together to play one of the most team-based shooters ever conceived may not have been the best idea.

The guy sitting next to me was the worst. Not only did he try and jump in front of me in the queue but, during play, he began endlessly whinging at the poor Blizzard representative watching us play. “This demo is terrible” “This demo is broken”. He was saying these things because we were playing against a team who quickly figured out that teamwork was essential, that it was fundamental in figuring out how to win. This guy kept charging like an idiot towards the opposing team’s defences — made up of a well positioned turret and a heap of enemy players. He was dying frequently and consistently and he didn’t like that. Instead of switching up his tactics or trying to work out some sort of solution, he chose to complain.

But, as annoying as this guy was — and he was really annoying — I understood his quandary. As complete noobs we really had no way of figuring out a solution, we lacked the knowledge or experience to get ourselves out of this pickle. The (incredibly patient) Blizzard representative made some suggestions to this whinger and after following those instructions both he and our team began to make some progress. It was simply a matter of choosing more suitable characters with different strengths and pooling our resources as a team.

But by the time we had worked it all out, it was too late. We had been obliterated.

Yet, unlike the douche-nozzle sitting next to me, I wasn’t frustrated. Not in the slightest. For one thing, I appreciated the way in which the opposing team (who turned out to be a group of friends playing together — figures) had pinned us down. We were beaten by people who had out-thought and out-worked us. I was fine with that. Watching them play gave me an insight into how Overwatch would be played when it was in the wild. It was something to aspire to.

Secondly, Overwatch — in my opinion — has already nailed the basics. Circling through a number of different character, I was struck by how different each character felt to play, and how rewarding it felt to simply move around and shoot things as these different avatars.

But this bloody idiot sitting next to me: I couldn’t help but feel as though there’d be more like him at Blizzcon. People who walked away discouraged and angry at the world. Overwatch, without doubt, must be a difficult game to demo. Overwatch will be a game for buddies. It’ll be a game where communication is paramount. It’ll be a game that requires delicate balancing tweaks and the feedback of an open-minded community that wants to help build something. It’s not necessarily a game for 12 complete strangers who don’t know each other from Adam.

That being said, I’m looking forward to seeing what Overwatch is capable of.