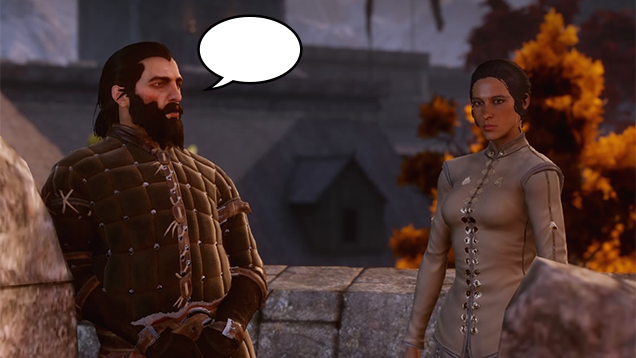 Dragon Age: Inquisition is generally a good enough game to make up for its bugs and overall lack of technical polish. However, one new bug stands out from the rest: The Banter Bug.

The Banter Bug has been identified by a number of players who noticed that their characters weren’t bantering with one another as they explored the game’s many open-world locations. The bug has been widely reported at EA’s Answer HQ help page, with pages of users saying that they played the game for many hours before realising that they weren’t hearing any field banter at all. In many cases, players also wouldn’t hear any music while roaming around.

I haven’t encountered the bug — I heard a bunch of varied party banter throughout my playthrough — nor has anyone else at Kotaku who is playing the game. However, one of our other Gawker colleagues has had it happen to him on PS4.

As you make your way through Inquisition, you’ll often hear your party members engage in short conversations with one another. Iron Bull will joke with Blackwall about how well their names go together, or Cassandra will ask Varric about his books. It’s generally really fun stuff, and does a good job of fleshing out the characters and adding some variety to exploration. So, it’s a serious drag that some players aren’t getting to hear it. The bug’s existence also contributes to a feeling of paranoia for those who don’t have it. Do I have the banter bug? I haven’t heard any banter in a while. Maybe I have the bug? I can’t tell.

Players have come up with a few fixes and workarounds, although it sounds like they work inconsistently. Some players are reporting that the bug can be fixed by fast-travelling straight from the war-room table, though there are some particulars you’ll want to follow to try that. There’s also a massive post at the BioWare forums in which one player has detailed a number of possible fixes.

Note that it is possible to consume all of the banter available to a follower given your place in the story. Still investigating.

Haven't confirmed this but some people are reporting fixing this by doing an level transition through the war table: http://t.co/IIaBjQby6d

Darrah also said that there is a patch in the works, though the issue won’t be addressed in the game’s first major patch, and BioWare can’t reliably reproduce the problem.

Inquisition has suffered from a variety of different bugs since it launched a couple of weeks ago. I mentioned the ones I encountered, along with the game’s more general sense of technical crustiness, in my initial write-up. The patch notes BioWare PR sent over for their day-one patch went a good ways toward reassuring me that many of the problems I saw during my pre-release playthrough would be addressed, though I still couldn’t escape the feeling that the game was held together a little loosely and would likely never run perfectly.

Some of the problems I ran into in my playthrough do indeed appear to have been patched out. Unfortunately, it sounds like other issues, from the banter bug to the uncomfortable silence bug to the weird faces to the busted magical rings, have cropped up in their place. Additionally, while I’ve had no major issues with the game on PC, my colleague Nathan Grayson tells me that the PC version crashes for him every hour or so, and many other PC players are upset about a variety of things, in particular the game’s mouse and keyboard controls. I’ve been pestering BioWare about their specific bug-squashing plans, along with some more general questions about any other updates the game may be getting, and will update if and when I hear anything substantial.

Dragon Age: Inquisition is a fine game, and in my experience, its strengths overcome its technical shortcomings. Still, it’s a shame to see a game this good marred by annoying technical issues.