Players Are Trying To Clean Up Pokemon's Hacked Trading System 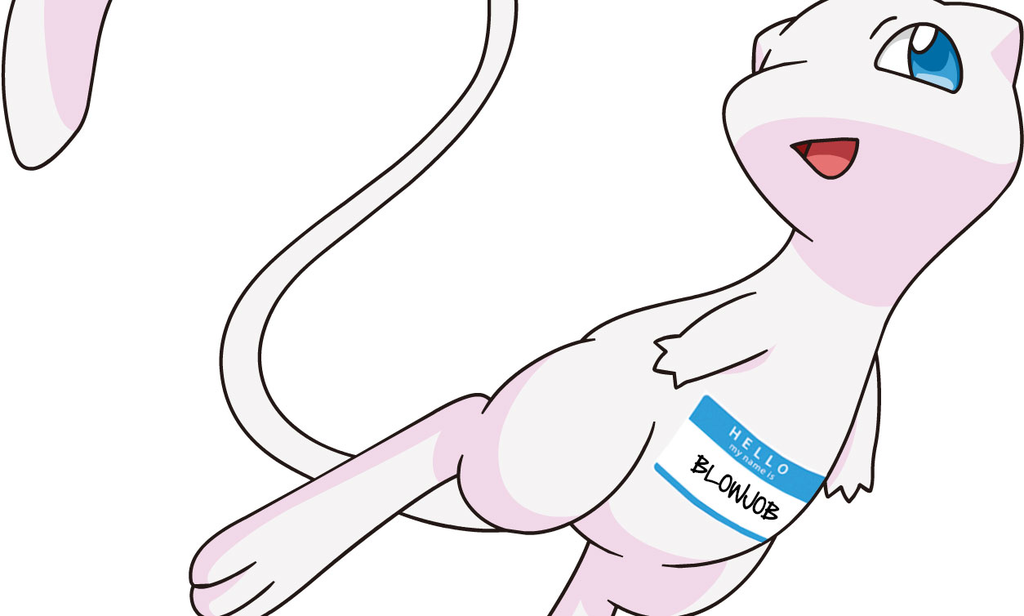 Right now, the GTS — Pokémon's online system, which allows players around the world to trade monsters with each other — is a mess. Normally, newer Pokémon games don't let you name your Pokémon anything offensive. To wit, a friend tried naming a Pokémon she recently caught "Grassy", but the system is so strict, that it wouldn't allow it. Hackers, however, have found a way around this safety measure — and they're flooding the online trading system with poorly-named Pokémon that shouldn't exist.

A search for Jirachi, for example, presents you with dozens of trainers that have named their creatures things like 'F**KYOU', 'ANALSEX' and other unsavoury things that probably shouldn't be in game played by children. These are screenshots I took today — warning, some may contain racial slurs: 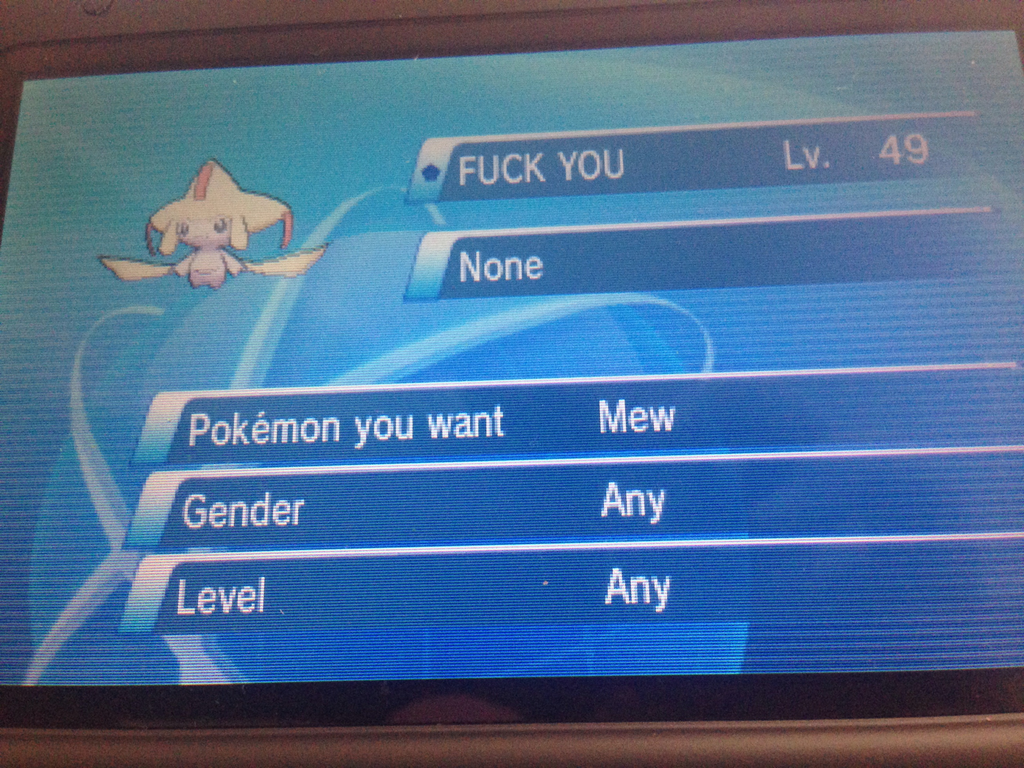 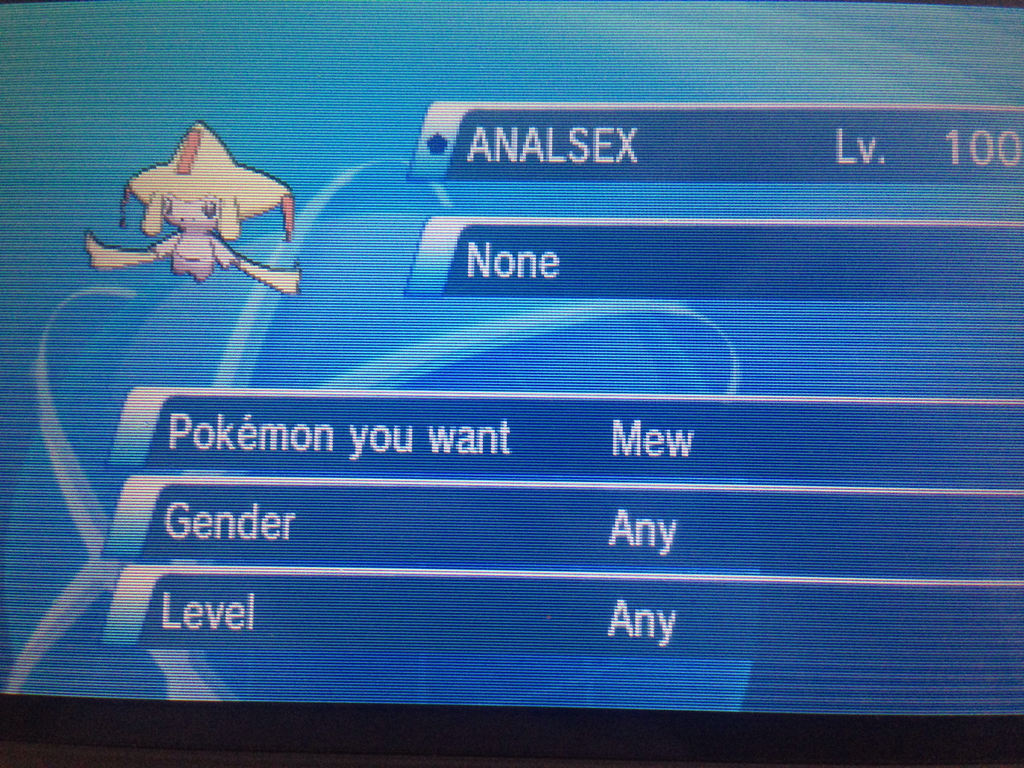 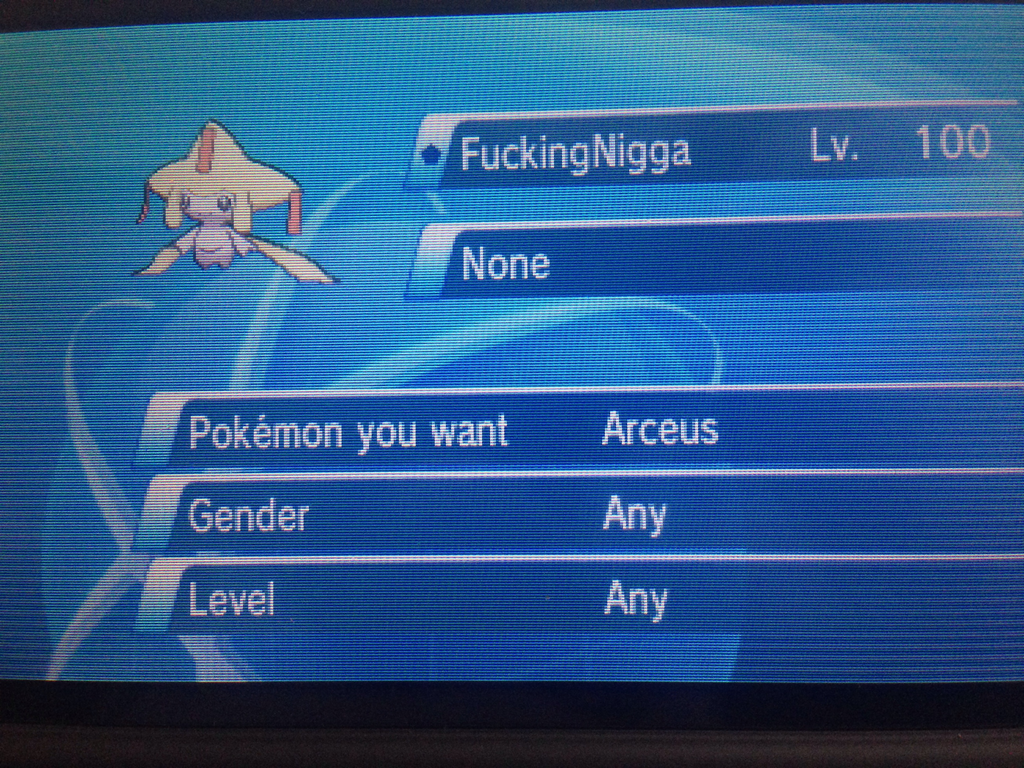 Most Jirachi, however, seem to be named FUCKYOU. There are dozens of them, it's ridiculous. Here's a small taste; a Vine I took while sorting through Jirachi on the GTS. Every time you see the Jirachi flash, that's a new Jirachi on the GTS system. And there are way more than I could fit in a single vine: Normally you can only get Jirachi through event distributions, making it a highly sought-after Pokémon. This means that, if someone wants to get this Pokémon, there's a high chance they will have to settle for one with an offensive name... assuming they can trade for it at all. You'll notice that many of these Jirachi are asking for other rare Pokemon, like Mew. You can't put Mew up for trade on the GTS, so many of these Jirachi are put up for auction simply for show, to shock other players. You can't even trade for them even if you wanted to.

Jirachi is not alone here, but it's one of the most prominent examples, since it's so rare. But if you search for other rare Pokémon., like Celebi, you'll find the same thing: hacked Pokémon with names they shouldn't be able to have: 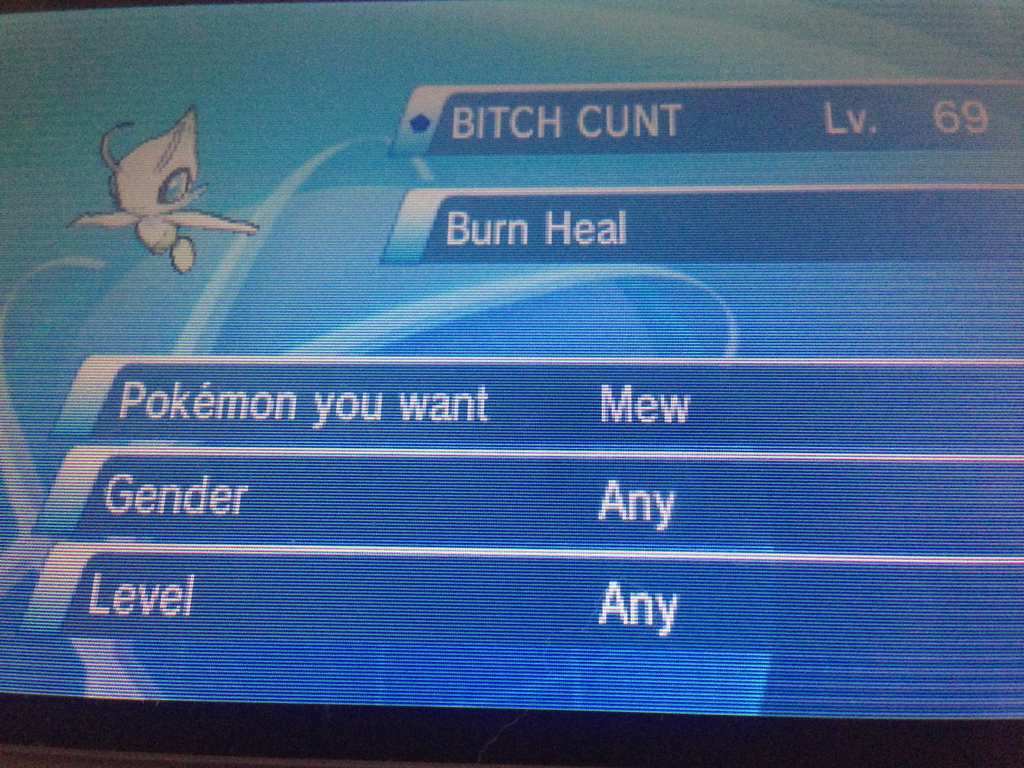 Some Pokémon, bafflingly, don't have a name at all: 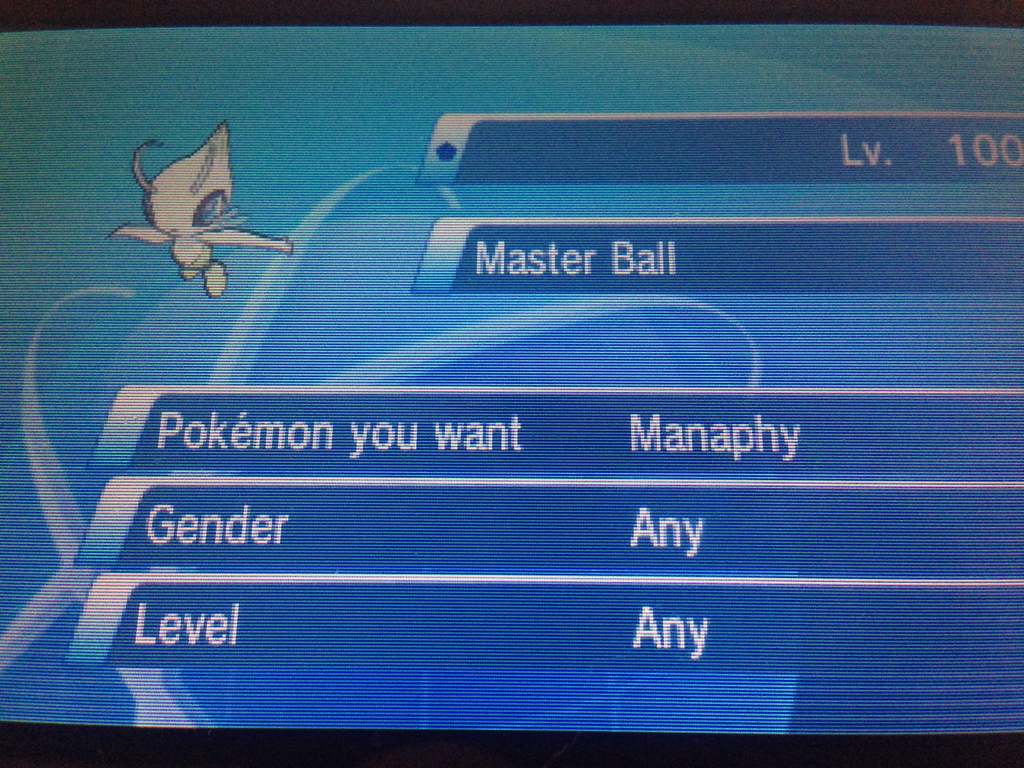 And, weirdly enough, many different Celebi have the name "FUCKJUSTIN." 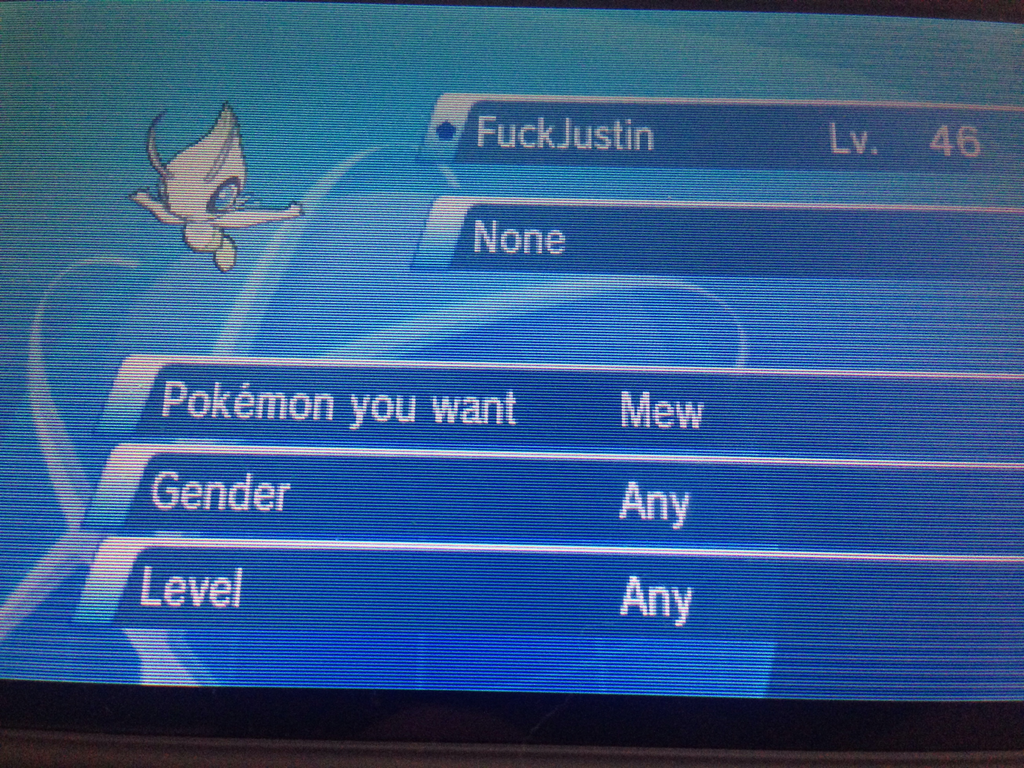 What did Justin do to anger Pokémon hackers? Hell, who is Justin at all? There are a number of Pokémon personalities named Justin, but I'm not sure if this naming phenomenon refers to any of them. Funnily enough, some of those 'FUCKJUSTIN' Pokémon come packaged with a 'burn heal' item, because of course they do.

Other hijinks on the GTS at the moment aren't so malicious. If you run a search for Pikachu, for example, you'll find a ton of them named "FRIJOLES." That's Spanish for beans: I don't know what's going on there either, but it shows that people like to have naming hijinks in the GTS, period. It's just a shame some of them are more offensive than they are funny.

As for what Nintendo is doing about this — we've asked, and will update you once we hear back. For now, some players are taking matters into their own hands with an effort called #CleanTheGTS on Twitter.

"We're trying to get all those Jirachis with bad names off the GTS," Sleepy Jirachi, a Pokémon personality, wrote on Ask.FM. I inquired further, and learned that this player is doing his best to clean up the mess that is the GTS right now. "It's moving slow, but I've actually been able to get one of those Jirachi, rename it, and then redistribute it through the GTS," Sleepy Jirachi told me over email.

It's fascinating because, in order to combat the awful hacked Pokemon flooding the GTS right now, people like Sleepy Jirachi are also using hacking methods — but to fill the trading system with Pokémon with better names. "I would like to eventually clean the entire GTS in time with support from my followers, as I can give out these [event Pokémon like Jirachi] through GTS when they become available and my followers can clone them and then also help clean." And sure enough, when I ran a search for Jirachi on the GTS, I did find a couple of Jirachi named 'Sleepy' among all the Jirachi named FUCKYOU.

While efforts like these are admirable, here's hoping that the online Pokémon trading system gets cleaned up soon.

It's worth noting that isn't the first time Pokémon players have to deal with the headaches that come with hacked Pokémon. In the past, things like Pokémon Bank have become flooded with impossible Pokémon that shouldn't exist, as they have been hacked to have moves they can't normally learn, or have been digitally manufactured to have incredible stats, among other things. In addition to that, people have also found ways to use legendary Pokémon that haven't been officially released yet thanks to hacking. This GTS hacking incident is just one example out of many.

The Best Couch Co-Op Games When You're Stuck At Home

Ari Notis 29 May 2020 10:00 AM
By now, you’ve probably figured out how to stay connected to your socially distanced friends. You’ve set up the Discord server. You’ve figured out which games have great online multiplayer. You’ve pinpointed a weekly time that works for everyone for a large-scale Animal Crossing visit (not that anyone’s schedules are jam-packed these days). But if you’re lucky or unlucky enough to be cooped up with others—roommates, partners, family members, extremely smart pets—there’s an easier way to find some connection: couch co-op.