The Game Awards And PlayStation Experience: What You May Have Missed

So we had a lot of short stories from the Game Awards event and the PlayStation Experience come in overnight and rather than hit you with them one at a time, here is most of them in a single go. Enjoy!

Here’s A Brief Teaser For What Remains Of Edith Finch

What Remains of Edith Finch is a mysterious, newly announced PS4 game from the makers of The Unfinished Swan. I wonder if Edith Finch knows Ethan Carter…

Got Your Eye On That Sexy Limited Edition 20th Anniversary PlayStation 4?

Sony is now accepting preorders for the retro-deco’d system. $US499.99 gets you the system, a controller and a camera you can sell on eBay or something. Only 12,300 units are being made, so make up your mind quickly. [AU editor’s note: This page was bugged for me so I wasn’t able to confirm availability to AU/NZ customers.] 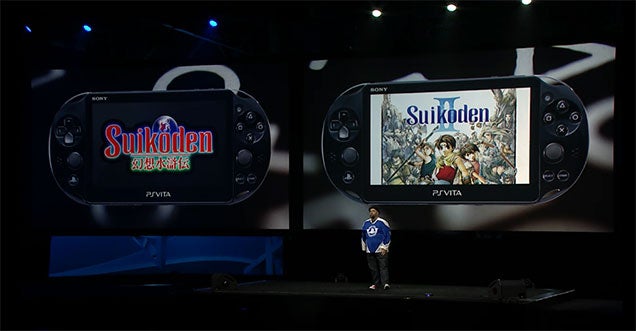 Sony has announced that the classic JRPG Suikoden II is coming to PS3 and PlayStation Vita. Not only that, it will be available next week.

I can already imagine the texts I’ll be getting from Jason about this.

“Kirk have you started Suikoden II yet?”

“Kirk, have you started it yet?”

“No excuses. Time to play it. Have you started?”

The Forest tore up Steam charts earlier this year and now it’s coming to the PS4. Here’s the announcement trailer.

Details were scarce — it’s a top-down game with a 5-v-2-v-5 team structure, and will be playable on the floor at the PlayStation Experience this weekend.

Here’s a fun clip from the Video Game Awards, where Bioware make a quick joke about why people really play Bioware games: the sex.

If it doesn’t make sense, here’s the context: Varric is a storyteller, and he writes books. One of his series is, well… smut. Trashy romance type stuff. The books are based on a certain Dragon Age party member who would probably flip if she knew what Varric is doing:

IS IT BASED ON AVELINE!? pic.twitter.com/DpmTxj4zMi

If you’ve played Dragon Age, this is particularly funny because Cassandra has a soft spot for smut, even though she haaates Varric. Good joke, Bioware!

Here’s the trailer that premiered at The Game Awards — it looks a bit like Borderlands no?

This Is The First Footage Of Before, Facepunch’s Awesome-Looking Take On… Caveman Strategy?

I wasn’t really sold on The Order 1886 before. Even after playing the upcoming PS4 shooter during this year’s E3, I left feeling like it was just another Gears of War-style gun-and-cover game. This trailer, though… well, I’m starting to change my mind. I totally want to hijack airships and assassinate nobles in steampunk Victorian London.

Adr1ft, The Cool Exploration Game That Takes Cues From Gravity

It’s being developed by Adam Orth’s studio Three One Zero, and is set to release in winter 2015. We got a new peek of it at The Video Game Awards, and it looks great.

This evening at The Game Awards, Trey Parker ran away with the Best Performance award thanks to his portrayal of a whole ton of characters in South Park: The Stick of Truth. Parker beat out Troy Baker (Shadow of Mordor), Adam Harrington (The Wolf Among Us), Melissa Hutchison (The Walking Dead), and, well, the one and only Kevin Spacey. Check out Parker’s speech above. Short and sweet.

You Like The Banner Saga? You’re Getting A Sequel

That’s all of them!