Blizzard Testing Diablo III Microtransactions, But Only In Asia 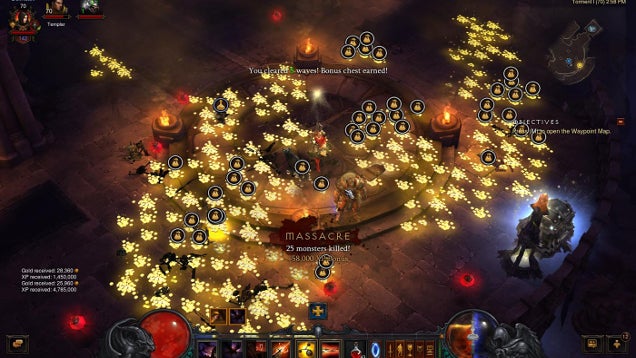 Diablo III has changed a lot over the years, dropping a much-loathed auction house and gaining all sorts of balance overhauls, enemies and entire new areas. Now, however, it could be looking at a change of a very different sort: real money microtransactions and an entire new in-game currency to support them.

Patch 2.2.0, which will soon launch on public test servers, is primarily focused on tweaks to things like Adventure Mode and "quality of life" improvements like a new cosmetics window, but today Blizzard announced another addition: Platinum, a microtransaction-based currency that, for now, will only appear in non-American and European regions. So presumably, Asia. They outlined what this will entail:

However, they added (both on the American page and in a separate, similar post for the European region):

"We recognise that many players have expressed an interest in microtransactions being added to Diablo III. While we may explore this model in some regions, we have no immediate plans to implement such purchases anytime soon for the Americas region."

Personally, I like that Blizzard has been so dedicated to fixing and expanding Diablo III over the years — and I understand that doing so costs money — but even considering microtransactions at this stage feels like a pretty big shake-up. If nothing else, it sounds like they're aiming more for cosmetics and boosts than they are loot and glittering prizes (thus sidestepping the issues the old real money auction house dredged up), but still. Fingers crossed that the game keeps being, you know, good in spite of this.

What do you think of the idea of possibly augmenting your Scrooge McDuck-esque piles of gold with fat stacks of real-life cash? Are you glad that, at least for the moment, Blizzard is only testing this in non-American and European regions?