Evolve Impressions: 'Just One More Round' 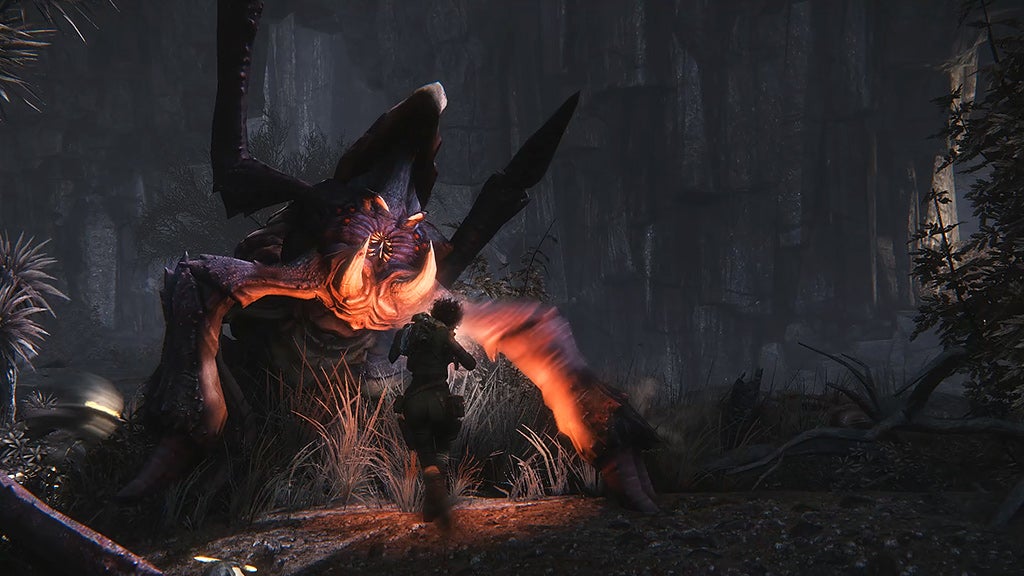 Evolve can be simplified in many ways, and you've probably heard them all before. It's a first-person shooter. It's like Left 4 Dead, four players banding together, but you're up against a Tank — played by a fifth player — each round. It's one big boss battle, over and over. But the details that go into the new game, which comes out on Tuesday, a year since we first saw it, actually make it a lot more complex than that.

Evolve feels a lot like that, and abides by similar rules for survival.

If life is a path with certain goals and various obstacles, you inevitably pursue those goals and overcome said obstacles with a trusted group of comrades. In Evolve, your goal, unless you're playing as the boss, is to defeat the Monster before it can eat enough wildlife and evolve into an unstoppable beast. A team of four hunters with complementary skills take on the Monster together, but they have to work together effectively to get it done. The moment the soldier doesn't respect the role of the medic or vice versa is when the Monster can get its upper hand. Relationships, and teams in Evolve, are delicate. They don't take much to fall apart.

I've spent a weekend playing Evolve, mostly on the human side and against others who got the game early playing as one of three Monsters: the Wraith, Goliath, or Kraken. I haven't played enough for a proper review just yet, but I've played at least enough to know there's something good here, something that feels like my kind of game.

I've always loved multiplayer shooters. There's something therapeutic about perfecting a tight, structured, competitive game. I sometimes prefer that to the feeling of exploring the nearly never-ending possibilities of a more open-world adventure. I don't always want to talk to NPCs and explore new levels. Sometimes, I want to play just one more round. I want to get lost in the business of refining and perfecting. Sometimes, I can convince myself that, with the proper team by my side, we can do better together next time. We can learn from our mistakes and allow each other to be better hunters. 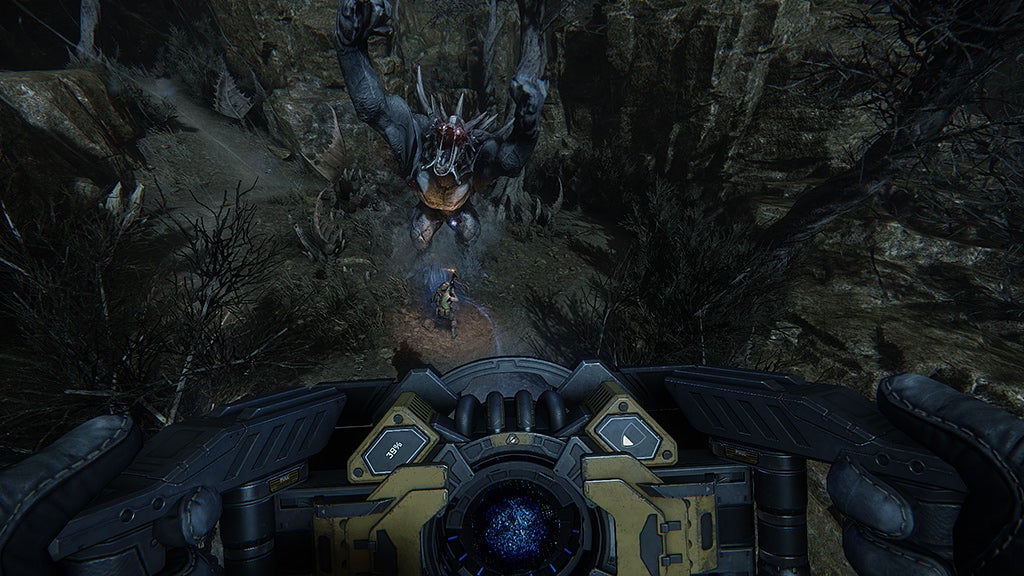 Left 4 Dead — which was made by the same studio, Turtle Rock, that has made Evolve — was one of the most formative experiences in my tenure as a gamer. I stayed up way too late playing "just one more round" of the first game and its sequel. Eventually, I knew my way around the Smoker, the Spitter, and the Tank. While your first few hours in a game like that are always an exploration of the limits and rules of the game, the pile-up of one-more-rounds teaches you to do more and to play better. It's at that point that a game based on characters and your skill using them truly opens up. Evolve is like that.

I suspect it will be some time before we start seeing some really high-level play from Evolve players. We'll see cunning tactics and a mastery of special abilities that will wow us, prove to us that there's more someone else could do with the same set of tools.

And Evolve already feels like a lot more to wrap our heads around than the more simple construct of the Left 4 Dead teams. It's not a matter of just unloading enough bullets into one of the game's Monsters until it dies; teams have to track, trap, attack and stay alive while the Monster may very well already be on its way toward more strength and tougher abilities. They have to stick together, to play to their roles but to also play as a team, without letting ego or hastiness or impatience or frustration disrupt their formation.

Or, of course, you can choose to play as the Monster. You can use a person's weaknesses to your advantage. You can target the healer who, if not properly looked after, will almost surely die immediately. A medic knows to mostly keep a distance, but they need the care of their team members to play to their own strengths to distract the Monster from targeting him/her. Or the Monster can lure the hunters toward some swamp-dwelling, alligator-looking predator then watch as their eagerness leads them to their own demise. What might seem like a small moment and break in the team's effectiveness can actually give the Monster enough space to run and regroup, growing both physically stronger and perhaps a little more brazen than the injured team can then take on. 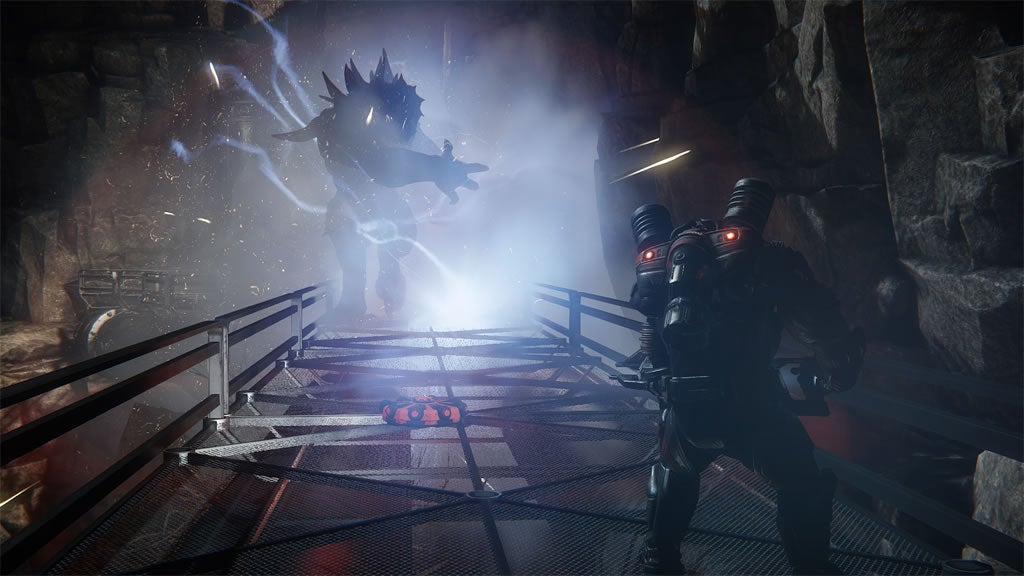 It's not enough to have played a handful of shooters in your time and assume you'll be a natural at Evolve. Sure, the assault class may seem fairly straightforward: you have buffs and guns that specialize in damage. Of the three assault characters that you have the option of playing, some fare better in close-range combat while others are handier at setting traps with mines. The medic class seems the most diverse: you have the option of supporting the team with various skills other than healing, such as tracking the Monster, or giving a boost to the team's running speed, or even resurrecting recently-deceased teammates. And there's an entirely new concept of character class in the trapper, who focuses on tracking and trapping the Monster.

Tracking, buffing and dealing damage are the main tenets of Evolve. Each class is equipped with abilities that make that process easier. Your experience of the game, therefore, is entirely dependent on you and your team's ability to grasp their respective duties. You'll have awful rounds — rounds where Maggie the trapper isn't following Daisy, her pet that sniffs out the Monster's location — and then you'll stumble on a team that feels cohesive and smart and considerate. You'll find the team that wants to act like a team.

The shelf life of games that are mostly multiplayer-based is hard to guess. There'll always be the Call of Duty releases that teens everywhere will spend every waking moment perfecting just to demolish those of us with full-time jobs and not as much patience. But then there are the Titanfalls; the games that have so much promise, and are actually tons of fun to play, but run out of steam quickly. There's a lot to figure your way around in Evolve, and it might just be enough to keep people's attention for longer than a month or two. 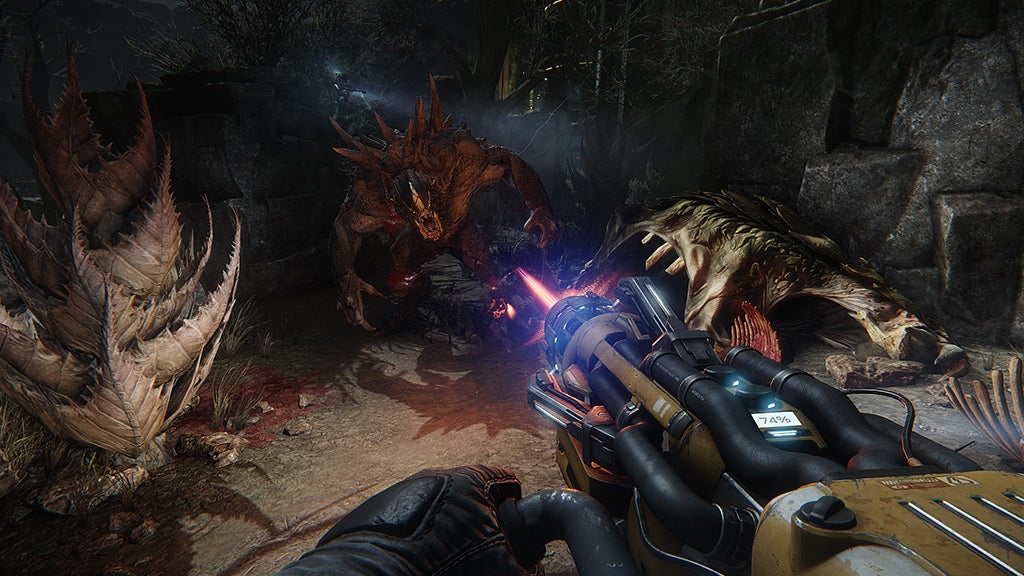 Your first few rounds might be surprisingly difficult. Your team might get wiped out by an experienced Monster. Or you, as the Monster, might realise just how precarious a spot you're in, despite seemingly being so powerful. Then there's the Evacuation mode, which reads like a stand-in for a multiplayer campaign. You play five rounds against the Monster, each round built around the outcome of the last. So if the Monster destroys the power plant in the first round, you can expect to deal with noxious gases harmful to the hunters in the second.

There's enough to sink your teeth into, enough challenge to learn your way around that I suspect I'll be playing Evolve mostly like I played the Left 4 Dead games: frequently, and until 4 a.m., without remorse. That's how I learned the ins and outs of L4D, including every glitch and every inevitable workaround the player community discovered and shared together. And while the discoveries in Evolve probably won't always be congruent with the intentions of the gameplay — monster-hunters probably aren't supposed to spend time jumping rope — their potential, and the players' potentials, excite me.

Everything in Evolve is about evolution. The Monster eats to survive and to grow stronger. Each player individually plays enough to level up their characters across the board — unlocking new perks they can attribute per round, and unlocking new characters and their features. But what interests me most in Evolve is the evolution of the team itself, of players acting out their roles and learning to work together as a team. Because as soon as you lose sight of your goals, and as soon as you abandon a fellow hunter, that's when you lose control and you lose the fight. And that's the end of the relationship.