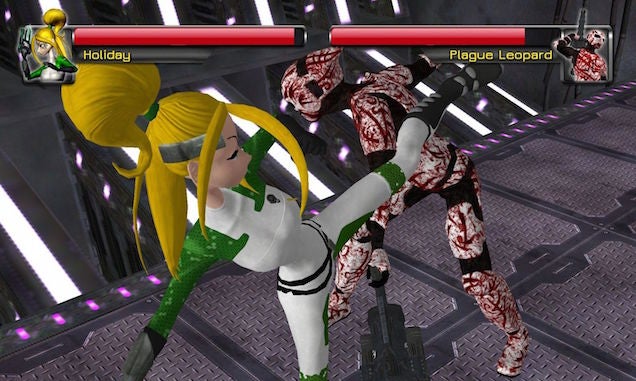 Giant Spacekat, developers of space adventure game Revolution 60, announced this week they cancelled PAX East booth space due to safety concerns. The studio has since spoken with PAX organisers and responded to criticism over the fact that its head of development, Brianna Wu, still deciding to attend PAX East and appear on several panels.

In an online statement earlier this week, she said she was concerned "due to a concern that in a crowd of such a volume expected at Pax, the safety of our team can not be guaranteed."

Wu has been feuding with members of the Gamergate movement for months and has blamed some of them for online threats of violence last fall. (Gamergate is, of course, an amorphous movement, and, as we've reported before, members of that same movement have condemned harassment against Wu.) She's most recently raised alarm about an individual who appeared to sympathise with Gamergate and made videos threatening violence against her while wielding a knife. In a statement released by Giant Spacekat on Wednesday said backing off from PAX East was a group decision, based on previous threats and the idea of thousands of attendees being on the show floor at one time.

"I cannot and will not make that choice for the people I work with," said Wu. "After talking to them, I made the decision to prioritise the safety of Giant Spacekat's employees. Specifically, we have chosen to withdraw our presence from the Pax East 2015 Expo Hall, due to a concern that in a crowd of such a volume expected at Pax, the safety of our team can not be guaranteed."

The company expects it won't have to pay for the booth space, despite the late cancellation.

Wu told me she tried to contact the organisers of PAX three times prior to cancelling, specifically to discuss concerns over an attendee being able to sneak a knife into the event.

Though Giant Spacekat would no longer have booth space at PAX East, Wu still planned to show up at various panels and potentially take meetings in or around the event. This has raised questions as to Wu's intentions. She's been an outspoken critic of the movement and been charged by some as using harassment against her for publicity. She responded to criticisms about continuing to attend the event through another blog post on Thursday:

Yes, because this is my choice. I wanted to go to PAX. Our decision to withdraw is about respecting my team's wishes. I've had difficult conversations with husband if it's worth it to put our lives at risk standing up to Gamergate. We made choice to speak up. I cannot make the choice for my team to interact with thousands of strangers a day with 46 death threats. Many are parents, one is pregnant.

No. This is honestly about safety. I do what I think is right. If you talk to my employees, I deeply care about my team. Also, the logic of skipping a PR event for PR escapes me.

No. We've attended Pax East for the last two years, and were all set to go this year. Withdrawing is a huge pain for us logistically.

"Why aren't you talking to police?"

I talk to law enforcement constantly. It's one of the most frustrating experiences of my life trying to get arrests. Look for articles from me soon about the systematic inability of law enforcement to respond to these threats, because it's complete BS.

In the hours after releasing a statement, PAX got in touch with Wu.

"I think if they'd talked to us earlier we could've made this work," she said.

PAX didn't respond to my request for comment, but released a brief statement to Polygon outlining the event's code of conduct and how it prides itself on bringing together people "share what they love most, in a safe environment."