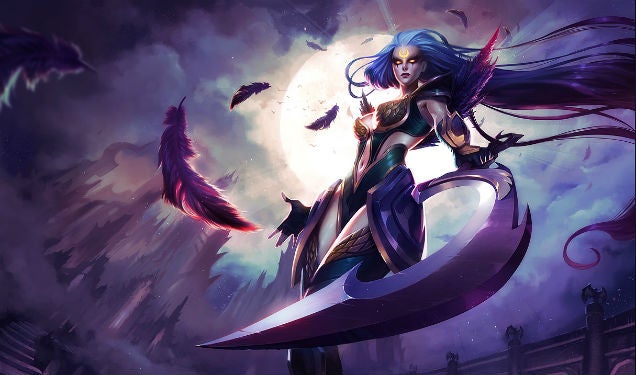 The new League of Legends Championship Series (LCS) is only just beginning, but the popular esports event has already been hit with a scandal as revelations surfaced yesterday that a manager of a well-known team threatened one player's mother so he wouldn't try to leave.

The team in question is known as "Meet Your Makers" (MYM for short), a German eSports organisation that currently has a single five-person team for League of Legends, Riot's popular competitive PC game that's given rise to numerous lucrative international competitions over the past few years. MYM acquired its current League-playing team at the end of 2014 by signing over all five players from Supa Hot Crew, another German team that was owned and run by the company AK3 GmbH until the deal went through last year. MYM's plan was to use the newly-acquired team to participate in the European branch of the League Championship Series, an annual competition that determines what teams from each region will end up competing in the high-profile World Championship, in which the best teams from each region compete for lucrative prizes (the 2014 world champions took home $US1 million).

Shortly before LCS was set to begin last month, MYM team member Marcin "Kori" Wolski suddenly stepped out of the competition — a move that drew some attention from eSports followers because it happened so close to the start of LCS, thus leaving his team short a member. Wolski returned to his former position in early February, his quick turnaround further raising eyebrows.

According to revelations that were first reported yesterday by The Daily Dot and Esports Heaven, Wolski tried to leave MYM in January because he was unhappy with its current management and was thus trying to move to another team known as Roar. His dissatisfaction with MYM was compounded by concerns about whether or not he'd receive proper payment for his work on the team.

The Daily Dot and Esports Heaven's reports both explain that Wolski said that he hadn't received several months worth of pay from Supa Hot Crew, the team in which he participated for last year's Championship Series. While his former and current team are technically two different organisations, MYM now employs several notable members of SHC since it absorbed the team into itself last year.

The specific details of Wolski's issues with Supa Hot Crew — how much he was owed, how long he played without being paid — aren't clear. He joined MYM in late 2014 along with the other League-playing members of SHC. MYM's leadership maintains that the team is under no obligation to pay Wolski for his time in SHC, let alone resolve any disputes for them. Here's how The Daily Dot describes the relationship between the MYM, Supa Hot Crew, AK3 GmbH, and how all those relationships impact Wolski specifically (emphasis mine):

Wolski was owed several months of pay from his time last season in Supa Hot Crew, the Daily Dot has learned. Meet Your Makers denies any responsibility for said payments, stating that they were to be handled by AK3 GmbH and their CEO Sascha Ackermann, who owned Supa Hot Crew at the time. But AK3 and Meet Your Makers are inextricably linked: Several prominent former and current Meet Your Makers staff are AK3 employees, including Business Manager Martin Krause, Sales and Marketing Manager Cristian Manea and of course Ackermann himself, who previously held the role of business manager in Meet Your Makers.

While Meet Your Makers maintains it has nothing to do with any of the payment issues from the Supa Hot Crew era, Wolski was not confident about facing similar issues with Meet Your Makers in the future. He also said he was no longer enjoying his time in the gaming house and wanted to leave.

Wolski's comments don't indicate that he had experienced any payment issues during his time in MYM similar to the ones he claimed to have with Supa Hot Crew. Regardless, Wolski was concerned enough about MYM that last month he told the team's manager, Sebastian "Falli" Rotterdam, that he wanted to stop playing. That's when things got ugly.

In a telephone conversation between Wolski and Rotterdam that was recorded by Wolski and sent to The Daily Dot, the MYM manager became furious and started to threaten Kori and intimidate him into staying on the team. You can hear Rotterdam shouting in the recording, even banging against the wall in apparent frustration. He tells Wolski that finding a replacement will cost the team $US50,000, since his departure could cost them valuable sponsorships. At one point, Rotterdam says that he will make sure Wolski's mother will "lose the house," since she is the one who signed her son's contracts to join the team.

You can listen to the recording of the call here: Wolski had been trying to join another League team, Roar, which isn't participating in the European branch of the current Championship series (they're based in Canada, so they compete in the North American Championship Series).

The Daily Dot and Esports Heaven's reports start to diverge at this point in the story, but both suggest that MYM's top management worked to convince both Wolski and League of Legends developer Riot that Kori could not join Roar because doing so would be in breach of his current contract with MYM, which is set to expire in January 2016. Regardless of how that stage of the events played out, Wolski remains a member of MYM for the time being. He's remained silent about the controversy on Twitter and Facebook.

MYM's statements given to the Daily Dot and Esports Heaven for their respective stories vary in terms of how much responsibility leadership accepts for the current drama.

Esports Heaven quotes MYM CEO Khaled Naim as writing: " Kori plays since 1st January for MYM so we have nothing to do with SHC. Kori left the house and explained it already what the reasons were. I never threatend Kori lol."

When confronted with the recording of Wolski and Rotterdam's conversation by The Daily Dot, meanwhile, Naim had this to say: "Concerning this recording I will react and take the necessary steps to avoid this, since something like that is not allowed and we don't tolerate this here."

Rotterdam, for his part, apologised for the way he treated Wolski, writing in a statement to The Daily Dot:

I admit I made a big mistake with saying this to kori. This Situation was crazy. A Player is leaving the Team one day before LCS starts. I was stressed in this situation and i agree i should not say something like this. I never said such stuff before to a player. I will offer MYM to leave the Organisation and step down from my job. The MYM Management was not aware of me saying this. I wanted to protect the other players cause the situation was looking bad for them and i made a huge mistake. MYM is not working like that it was me making a big mistake! I would like to Apologise to Kori and his mother at this point. Big Sorry!

It's worth noting that none of Wolski's teammates have come forth to report similar problems — either with SHC or MYM — since his story first came to light. A former MYM coach who goes by the handle Kittz and worked for the team in 2013 wrote a critical post on his public Facebook page in response to the news, saying that he saw similarly shady management practices during his time on the team (emphasis mine):

On personal level I can tell everything bad about MYM - I was working with a team for over half a year and my job was not paid while I was serving as a a) teamcoach b) manager c) analyst all at one time. They kept saying we will speak about it soon, win some games etc but we couldn't win games with failure on their side. Riot is paying money to the teams for manager and coaching staff and they took all for themselves while I was doing a lot of for the team.

There was a lot of shady things about MYM especially Falli but I don't want mention them because of one reason - I respect players and something might go bad for them in this case.

Bear in mind, however, that Wolski and others haven't taken issue with MYM for not paying him. Wolski only said he was trying to leave partly because he was worried about such a problem arising — not that it actually had.

In the general League of Legends community online, public outcry has been highly critical of MYM. League fans have been jabbing at the team's official Twitter handle: 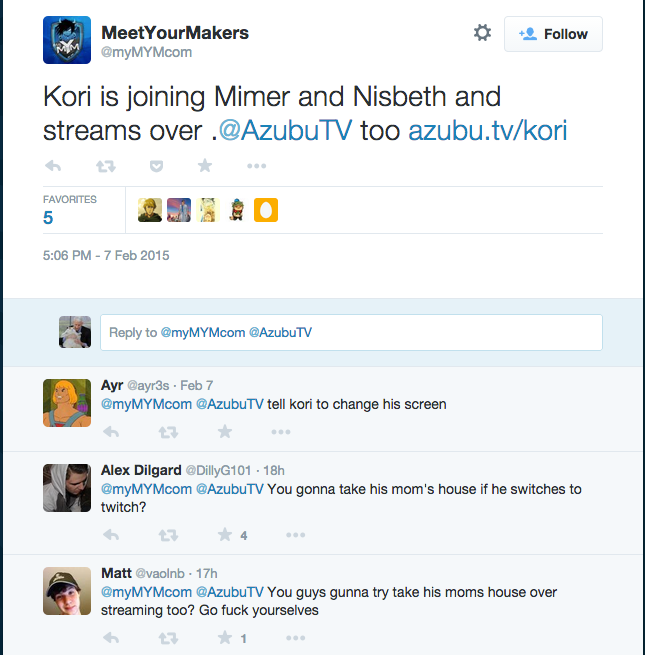 League players on the game's massive subreddit have been nudging developer Riot, which has a well established relationship with the forum, to step in. 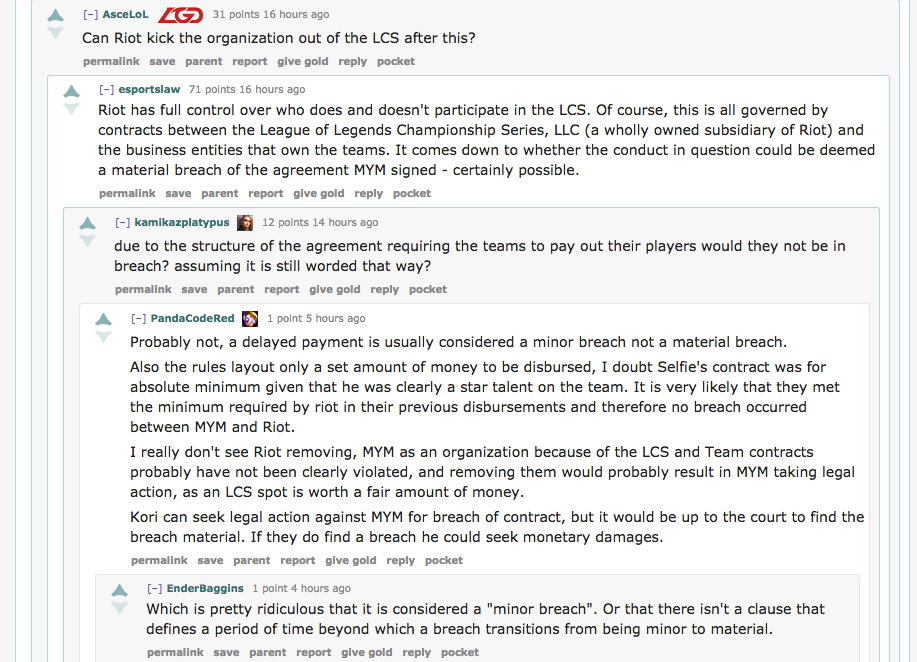 On the Team Liquid forums, another big League and esports hub, the reaction was similar. "This team is behaving horribly," players seemed to agree. "Shouldn't Riot do something about it?" 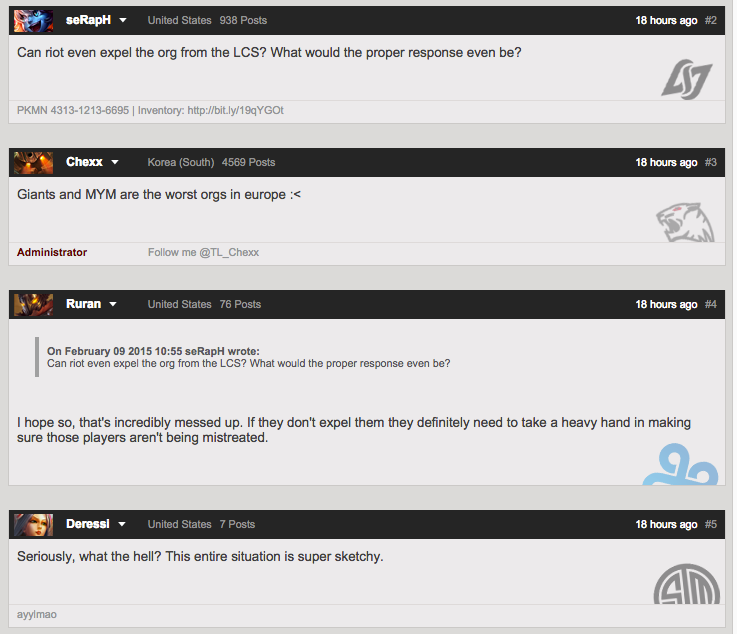 Others saw MYM's behaviour as a sign that the entire esports infrastructure is in need of reform: 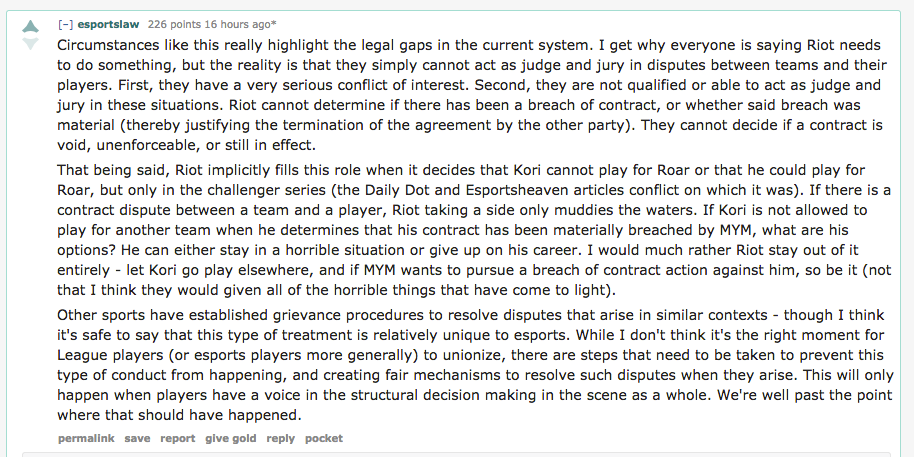 MYM hasn't said anything further publicly about how it will respond to the situation. What the conflict means for Wolski and whether he will continue to play on the team also remains unclear. He and his other teammates have remained silent about this issue in public so far. The team's next scheduled match is supposed to take place this coming Thursday, February 12th.