Resident Evil Revelations 2 Isn't Off To A Great Start 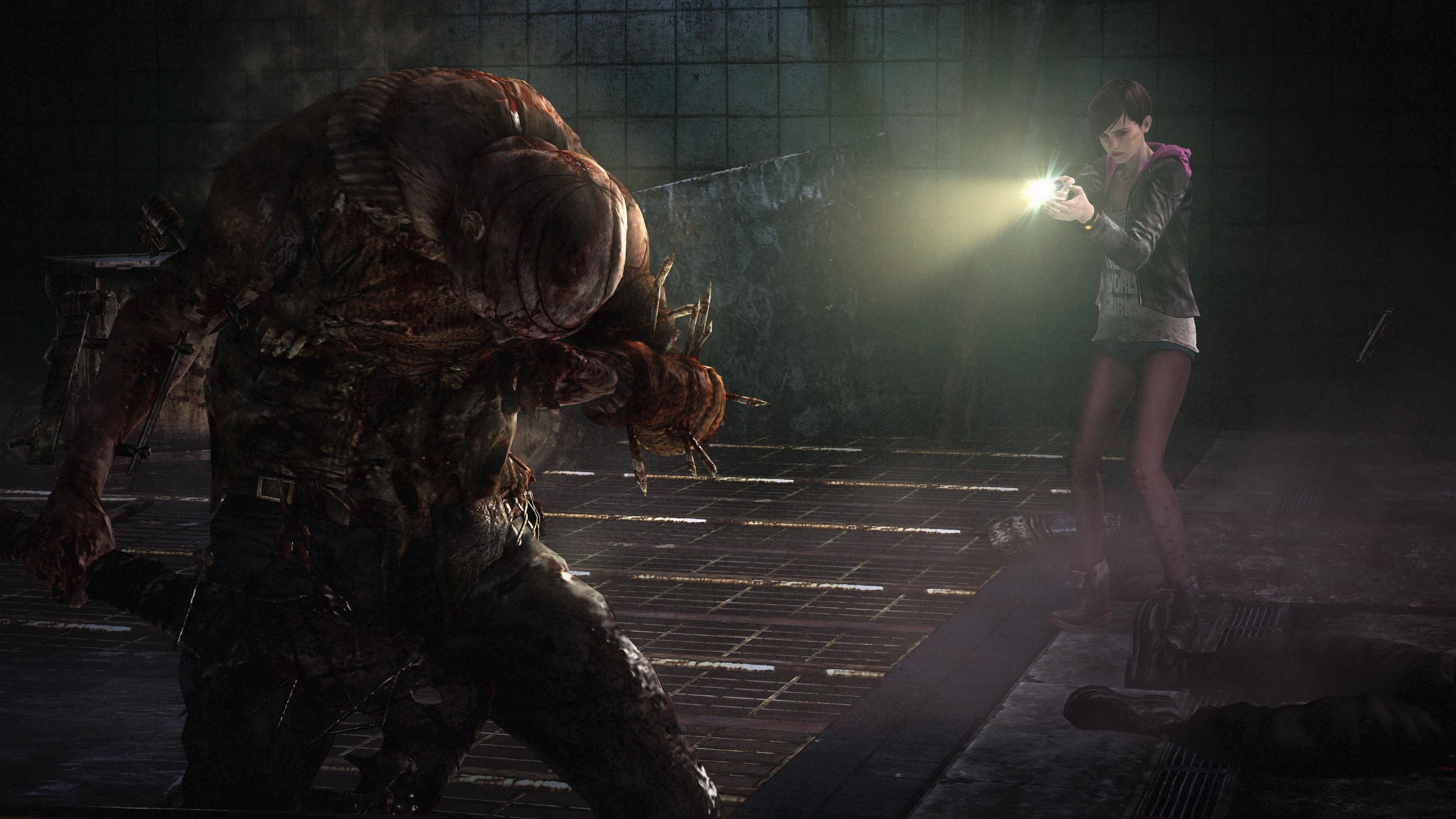 It's been nearly 20 years since Capcom introduced us to the world of Resident Evil, but Revelations 2 is the first time the series has gone episodic. I'm not convinced it's better for it.

Revelations 2 picks up well after the Raccoon City incident — the mansion, the t-virus, the evil Umbrella corporation — that kicked everything off. It's been long enough for children of the original game's main cast to grow up and become their own zombie-fighting bad asses. Claire Redfield, sister of Chris Redfield, now fights bioterrorism in the world as part of a group called TerraSafe. Moira Burton, daughter of Barry "Jill Sandwich" Burton, has joined up, albeit against her father's wishes. During a party for TerraSafe, the two are kidnapped and brought to an island, where it appears a group of scientists have been experimenting on people. Since it's a Resident Evil game, it's all gone very, very wrong, and the two have to try and escape.

If you're fuzzy on Resident Evil's sprawling mythology, I wrote a post earlier with the need-to-know basics for Revelations 2's main characters and what they have been up to lately.

The original Revelations was released on 3DS before being ported to a bunch of other platforms. As the main Resident Evil games have increasingly adopted an action-heavy tone that's more Michael Bay than John Carpenter, Revelations tried to push back on that, echoing the origins of Resident Evil by trapping players on a ship with awfully tight corridors. It was just an ok game, though — another mediocre instalment in a now mostly mediocre series.

There's no reason to have played Revelations if you're interested in Revelations 2. Some familiar enemies start showing up, but newcomers can quickly ease into shooting bad guys.

Once the bombastic CG opening is over, it's a familiar setup for Resident Evil. Claire wakes up in a cell with a pulsing monitor attached to her arm. Down the hall, a woman screams. The world around you is damp, decrepit, and likely hiding all sorts of nasties in the shadows.

Revelations 2 tries to establish its own identity by immediately partnering you with Moira. The two characters play differently, as the action-ready Claire is the only one who can wield guns. An unspoken trauma has permanently scarred Moira, whose skills mostly involve pointing a flashlight to highlight collectibles in the environment and temporarily stun enemies. It's hard to believe whatever happened to Moira trumps the deadly monsters around her, but it gives the game an interesting dynamic. If holding a shotgun makes you feel comfortable, you'll deal with the AI-controlled Moira trying to point the flashlight in useful directions. Spoiler: she won't. 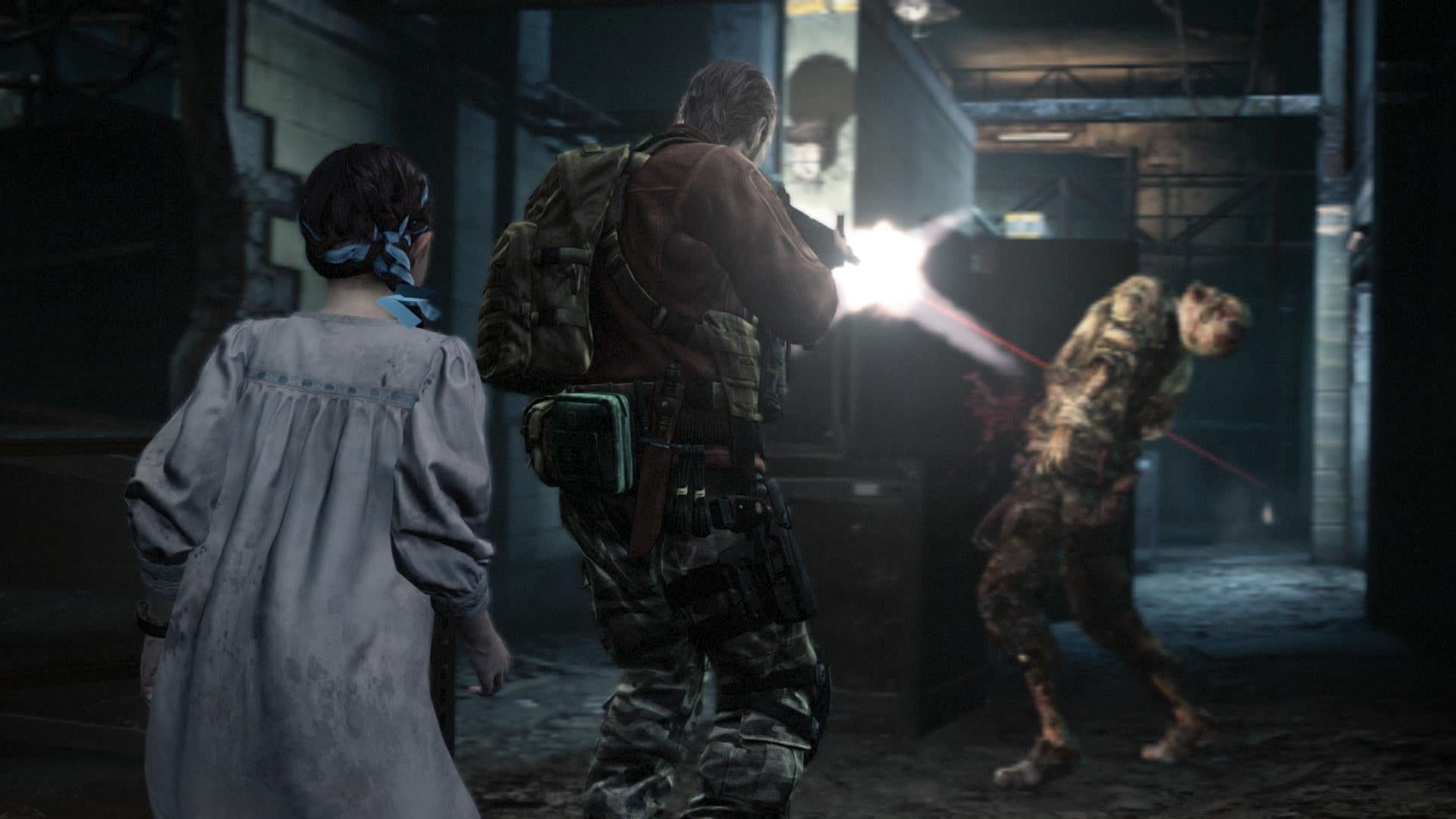 The game's actually much more successful at establishing a contrast between the other playable characters during the second half of the episode. Barry Burton arrives at the island in search of his daughter and quickly stumbles upon Natalia, a young girl with a nifty penchant for picking up bricks to smash zombie brains. Barry isn't screwing around here: the man has a flashlight on his chest, which means he can see what he's shooting at! While he's a walking tank, Natalia can sense the enemies in the area. This allows Barry to plan his next move, though you typically have access to enough ammunition that it becomes a moot point. She can also sneak into conveniently placed holes that conveniently lead to the next objective.

Revelations 2 does have co-op (split-screen, even!), which might make this feel more engaging, but I wasn't able to try it. As a single-player game, it feels like Claire and Moira are hobbled simply to make room for each other. Only Barry and Natalia feel complimentary.

If you recently played the updated Resident Evil remake, Revelations 2 will feel bizarre. As the action elements have become more pronounced, the games have gotten faster and faster. Resident Evil used to move at a lumbering pace, but now, everything's incredibly swift. Like the original Revelations, this game tries to have it both ways — generating anxiety though environmental powerlessness but without removing the player's power — and it doesn't really work. While Revelations 2 largely takes places in uncomfortably dark and narrow spaces, the enemies don't pose much of a threat. In earlier Resident Evil games, every single combat scenario was tense, as death always lingered. Here, 30 minutes in, you've already dropped a dozen no-name baddies and the pressure is off. Unremarkable enemy design doesn't help, as the series' increased desperation for non-zombie creatures has mostly resulted in goofiness.

You're looking at two hours of playtime for the first episode, an adventure evenly split between Claire/Moira and Barry/Natalia. I didn't expect much more from an "episode" of gaming, but Revelations 2 fails to develop a satisfying arc. This hour is not enough time to settle in and get comfortable. You're barely finished with the tutorialising when the credits roll. It may have been worked better if the episodes swapped between the different viewpoints, but like many pilots, perhaps Revelations 2 will find some proper footing in subsequent episodes.

Here's the weird part: the best part of Revelations 2 might not even be in the story section. Revelations introduced Raid Mode to the series, in which players are dropped into various and increasingly hairy scenarios to level up a character and their weapons. It all looks a bit like Borderlands, with health meters and level markers hovering above enemies while dice-rolled numbers happily bounce around each fired bullet. Raid Mode starts a little slow, but it doesn't take long for the game's vanilla combat to get totally wild. Suddenly, bizarre enemy variants are being rolled out (one of them has enemies lumbering towards you while completely on fire), you're forced to use every last bullet in order to survive, and death is near. I'll probably be returning to Raid Mode a few times before the next episode drops in March.

Thankfully, unlike Telltale's adventure games, we won't have to guess when the next episode is dropping. The release dates are set in stone because the game is totally finished. Capcom actually provided all four episodes ahead of time, though I can only talk about the first one.

I'll admit to being a grumpy fan these days, but after P.T., I'm reminded what Resident Evil should be capable of. It deserves better! Revelations 2 isn't bad, mind you, but it's not great. At the very least, the Revelations spin-offs are trying to play with series expectations. I'll play the next episode, of course. I'm a Resident Evil fan. What am I going to do, stop now?